6 min read Published September 12, 2022
Written by
Jason Steele
Written by Jason Steele Travel Rewards Expert Contributor
Jason Steele is a professional journalist and credit card expert who has been contributing to online publications since 2008. He was one of the original contributors to The Points Guy, and his work has been appearing there since 2011. He has also contributed to over 100 of the leading personal finance and travel outlets.
Jason Steele
Edited by
Cathleen McCarthy
Edited by Cathleen McCarthy Senior Editor
Cathleen's stories on design, travel and business have appeared in dozens of publications including the Washington Post, Town & Country, Wall Street Journal, Marie Claire, Fodor’s Travel, Departures and The Writer.
Cathleen McCarthy

If you buy gasoline, then you’ve surely noticed the price of gas has soared since the depths of the pandemic in mid-2020. And with the high price of gas, there has been renewed focus on scams that can take place at the gas pump.

There are many ways that scammers target gas station customers. The most common scam is called skimming, which is when criminals alter a gas pump so that your credit card is read by their device, not the gas station’s. This device skims, or captures, your credit card information, which is quickly used to make fraudulent charges.

How to spot credit card skimming

The skimming device is designed to look like part of the gas pump, but a closer inspection reveals it’s a piece of molded plastic that only appears to be part of the pump’s credit card terminal. Skimmers were first found to be prevalent in cities, but their use has now spread to more rural areas.

To spot a skimmer, pay attention to the credit card terminal, to see if it doesn’t look right in some way. Typically, skimmers are crudely made devices that might look flimsy compared to a legitimate credit card reader. If you try tugging or wiggling the device, and it’s not securely attached to the pump, then there’s a very good chance it’s a skimmer. And if you compare the appearance of the device with those on the other pumps at the gas station, and it’s different, then it’s likely a skimmer, as not every pump will be compromised.

After skimming, one of the most common gas station scams is called pump switching. This is when a criminal switches the hoses from one pump to another. The criminal then waits for someone to pay for gas at that pump, which actually dispenses fuel to the criminal’s car. The criminal will likely use the other pump to dispense a minimal amount of gas in the victim’s car, while filling up his or her own car.

To avoid this scam, double-check that the pump you’re using corresponds with the terminal you’re paying for. And make sure the hose doesn’t wrap around the pump to the other side.

Another crime that occurs at gas stations is the simple car robbery. Victims can have their purses, wallets or other personal items stolen while they’re filling up their tank, or making a purchase at the convenience store. And if you leave your car unattended with the keys in it, the car can be stolen as well. Other crimes include siphoning gas out of a car that’s parked at the convenience store next to a gas station.

To avoid having your car robbed at a gas station, always pay attention to your surroundings. If you see suspicious-looking people loitering around, then you might wish to visit another station, especially at night. Look for a well-lit station with employees and other customers visible. Always remove your keys from your car, and be sure to lock it if you need to use the convenience store or restroom. It’s always a good idea to keep valuables out of sight.

Ways to avoid getting scammed at the gas pump

Although gas pump scams can be clever, there are always ways to avoid them. First, you can simply go inside and pay with cash, if that option is available. Another strategy is to avoid using debit cards at gas stations, because they lack the protections of credit cards.

When your debit card is compromised, the money is instantly removed from your account. But if your credit card has a fraudulent charge, you can dispute it before you need to make a payment. To catch fraudulent charges, always check your credit card statements carefully each month. If you use a debit card with a PIN, be sure to cover the keypad with your hand, to prevent people or even camera’s from learning your PIN.

If you prefer the convenience of paying at the pump, you can try to choose the pump closest to the building. It’s the most visible pump, and the least likely to have a skimmer attached to it, or criminals hanging around it. To be extra safe, always lock your car when you get out, even if you’re standing right next to it, to avoid being the victim of a so-called snatch-and-run thief.

SHARE:
Written by Jason Steele Travel Rewards Expert Contributor
Read more from Jason
Jason Steele is a professional journalist and credit card expert who has been contributing to online publications since 2008. He was one of the original contributors to The Points Guy, and his work has been appearing there since 2011. He has also contributed to over 100 of the leading personal finance and travel outlets.
Edited by
Cathleen McCarthy
Edited by Cathleen McCarthy Senior Editor
Cathleen's stories on design, travel and business have appeared in dozens of publications including the Washington Post, Town & Country, Wall Street Journal, Marie Claire, Fodor’s Travel, Departures and The Writer.
Cathleen McCarthy
Senior Editor 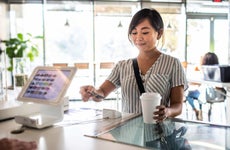 What can I do about mobile wallet fraud? 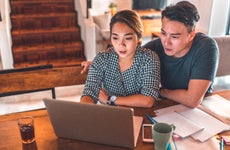 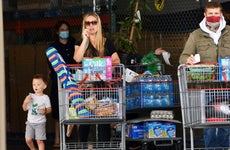 Worried about surging inflation? Here’s how to protect your wallet from taking a big hit 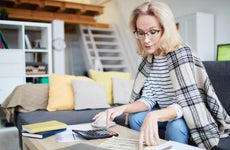 How to prevent credit card fraud amid coronavirus pandemic