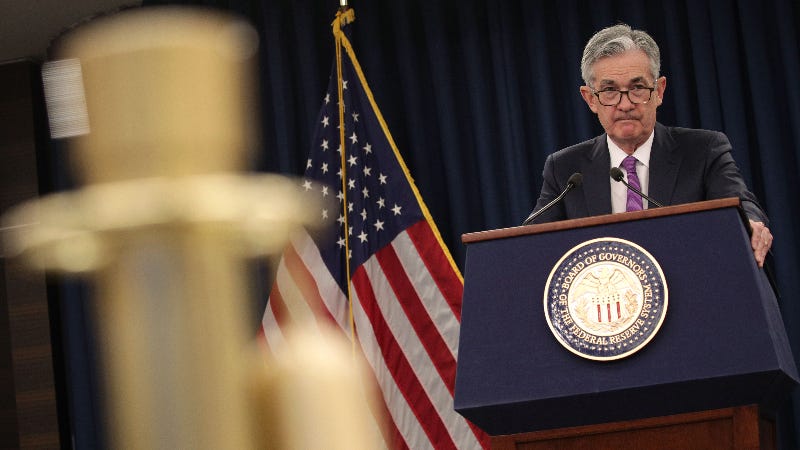 The Federal Reserve entered 2020 with plans to leave interest rates alone. That could all be upended by the deadly coronavirus sweeping the globe.

Markets on Friday plunged for the eighth straight day, and the S&P 500 fell more than 11 percent, its worst week since 2008, on fears that the spreading coronavirus could cause a global economic fallout. Investors flooded to safe haven assets such as the 10-year Treasury, sending the yield below 1.3 percent in intraday trading, its lowest ever.

With markets swooning, all eyes are now turning to the Fed. Traders are betting that the Fed will cut rates at all of its remaining meetings in 2020, according to CME Group’s FedWatch. The majority (or 87 percent) are pricing in a 50 basis point rate reduction when the Fed next meets in less than three weeks, while nearly 13 percent are betting on a 25 basis point cut.

Comments out of the Fed suggest officials are prepared to fulfill those bets if needed. Fed Chair Jerome Powell in a rare unscheduled statement Friday said the coronavirus “poses evolving risks to economic activity,” and the Fed is prepared to “act as appropriate” to support the economy. That’s the same phrasing officials used in previous instances to signal cuts are coming.

While it’s not an actual promise, experts say it might be time for the Fed to open the door for that possibility to quell the panic.

“You don’t want to feed the beast, but on the other hand, you don’t want to take easing off the table,” says Vincent Reinhart, chief economist and macro strategist at Mellon, who spent 24 years at the Fed. “The answer is, keep as low a profile as possible and remind them you still have the lights on in the building.”

What it would take to get the Fed to cut

Economic fears about the virus, which has infected more than 83,000 worldwide, stem from the massive disruptions to global supply chains and the travel industry.

Wuhan, the Chinese city believed to have been the epicenter of the outbreak, has been on lockdown since Jan. 23. Meanwhile, swaths of the country contributing 69 percent to China’s gross domestic product have been on lockdown, according to a Bloomberg analysis charting the impact.

Car manufacturers from Honda to Nissan have closed their factories, while other firms, including Apple, have halted their operations in China entirely. With China being the world’s second-largest economy, experts estimate that spillover effects to the domestic U.S. are entirely probable, as worldwide production slows. And as more incidents pop up around the globe, more lockdowns could occur. Cases have emerged in South Korea, Iran and Italy, which has led to the enforcement of some quarantine zones.

It’s prompted fears that the pathogen could be spreading at pandemic levels. The World Health Organization on Friday elevated its risk level for the coronavirus to “very high.”

“The economy just can’t produce as much,” says Steven Friedman, senior macroeconomist at MacKay Shields who formerly worked for the New York Fed. “The magnitude is very challenging, especially once you have the supply-side disruption, it can feed further.”

Officials have outlined in public speeches what could prompt the Fed to move, even while stressing they don’t see it happening just yet.

Powell told lawmakers in February that the Fed would be judging any coronavirus response with two questions: Will its effect on the U.S. economy be “material” and “persistent?” Meanwhile, St. Louis Fed President Jim Bullard said on Friday that the Fed would cut rates if the virus became a global pandemic.

Powell has preached that interest rates are in an appropriate place to support continued growth. But he’s noted all along that officials would be making their decisions on a meeting-by-meeting basis, emphasizing that they would act as necessary if any new developments derailed their outlook for the U.S. economy.

Will a rate cut be enough?

But there’s a growing concern among experts that a rate cut might not even help. The Fed’s tools are more demand driven, as interest rate cuts are intended to spur spending. But the outbreak in China has caused a supply shock, meaning firms haven’t been able to produce goods and services. If factories aren’t open, it won’t matter if interest rates are lower.

Still, there are some remnants of a shock to demand, Reinhart says. Consumer spending has taken a hit from quarantines and lockdowns. The Fed will have to juggle those two sides when assessing the path for interest rates.

Amid record volatility, communication is going to be key. The Fed will want to ensure market participants and consumers that it’s watching the situation without sounding overly fearful or overly optimistic.

“It puts Fed officials in a very difficult situation,” Reinhart says. “They don’t want to be responsible for a correction. If Powell went out there right now and said the economy is in a good place, that would not be reassuring to markets. If they announced an inter-meeting move, it would be very difficult to do that and not seem panicked.”

Former Fed governor Kevin Warsh in a Friday interview with CNBC suggested a coordinated central bank response across the globe could be likely after the latest developments with the coronavirus. Other experts speculate about a joint statement on behalf of the world’s central banks.

Amid the market turmoil, it can be hard for many Americans to stay calm. But experts caution that it’s important to take a long-term view when it comes to investing and assessing your portfolio.

“The stock market sell-off has been dramatic and stunning in its speed. For long-term investors, this is a bump in the road that will eventually only be a memory,” says Mark Hamrick, Bankrate’s senior economic analyst. “As with the outbreak, we cannot be confident of the depth or duration of the market’s decline. But also similar to the spread of the virus, we know that it will have a conclusion. Long-term investors who have the ability to remain in the market know the way one locks in a loss is to sell.”

Details surrounding the outbreak are still uncertain. Assessing the impact on the U.S. economy will be difficult, and much of the economic data due to be released in the coming days will be backward-looking.

“The one overwhelming thing to remember is we really don’t know, and they really don’t know in the Federal Reserve building,” Reinhart says. “It is an environment of deep uncertainty because it’s about the dynamics of virus and global population.”

All of this underscores the importance of building an emergency savings fund, especially one that is easily accessible. Use Bankrate’s tools to craft a budget and consider opening a high-yield savings account from an online bank that offers rates up to about 20 times the national average.

Meanwhile, homeowners have an added opportunity to find extra breathing room in their budget by refinancing their mortgage, with rates nearing all-time lows.

“While there’s a great deal of uncertainty associated with the coronavirus outbreak, one thing is certain: It is during times like these that consumers need to remain diligent about saving money,” Hamrick says. “Our Bankrate surveys have consistently found that the No. 1 financial regret among Americans is the failure to save for emergencies and for retirement.”