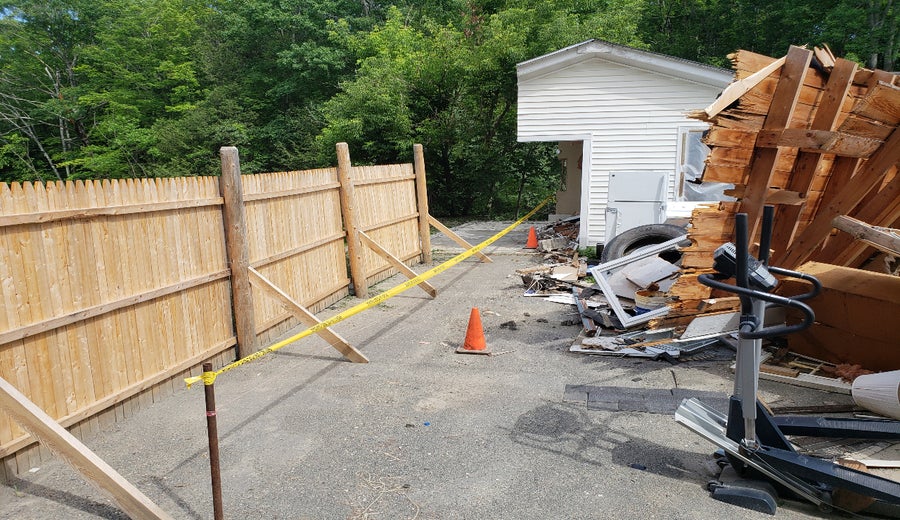 If you own where you live — whether it’s a suburban tract house, a farmhouse on 40 acres in Maine or a studio apartment in a New York City co-op — your home is your castle.

While there’s no moat around your home like in the Middle Ages, encroachment can happen and that can lead to border and property disputes.

In 2020, it’s unlikely that anyone trying to annex your abode will be of the sword-wielding variety, but that doesn’t mean houses and properties today are always safe from neighbors looking to extend their own territory, or that a property dispute can’t escalate to the point of using sharp objects as boundary-defining tools.

Take the battle between Gabriel Brawn and Theresa Laythe-Ritter and her family. The Brawns and the Ritters own adjoining properties in Dover-Foxcroft, Maine, and when the Brawns thought the Ritters and their tenants were becoming less neighborly, Gabriel escalated a simmering dispute over a garage that was straddling the property line. Armed with an updated boundary survey and a Sawzall, Ritter sliced away the offending part of the structure, clearing his land of the incursion, the Bangor Daily News reported.

“Self-help actions” like that “do run the risk of you damaging someone’s personal property and being liable for the cost of that damage,” said Sarah A. McDaniel, a founding partner focusing on property law at Douglas McDaniel and Campo, a Westbrook, Maine-based firm.

McDaniel was not involved in the garage-sawing case, but, she said, it illustrates how passionately people will defend their property rights.

“The interesting thing to me is that people seem to fight more vigorously over smaller slivers of land,” she said.

In her practice, McDaniel said the two most common types of disputes are boundary-related and easement-related.

Boundary cases center on the exact limits of each person’s property, and easement cases focus on the rights one person has to use another’s property to access their own.

One thing to keep in mind with easement cases: If, for example, you’ve let your neighbor cut across your property for many years, that right could pass on to the next owner. McDaniel said the real issue with easements are usually when the scope of the land use changes — like if a single resident built a road across your property to access their land, but then sold the plot to a developer who intended to build a whole new neighborhood that would still rely on that road.

For either kind of case, Mainers are required to try to settle their dispute through mediation before going in front of a judge. McDaniel said it’s generally best to try to settle the conflict as quickly as possible outside of court, even if it might mean agreeing to terms and boundaries that aren’t exactly what you were hoping for.

How homeowners associations (HOAs) fit in

Property disputes don’t just happen between people in single-family homes, either. Residents in homeowners association (HOA) neighborhoods and urban co-ops and condos can squabble with their neighbors, too.

“The major difference of course is that when you buy a home in a homeowners association or a co-op or condo, you are subjecting yourself to a set of rules that are established in a community’s governing document,” said Marc H. Schneider, managing partner at Schneider Buchel, a Garden City, N.Y.-based law firm that focuses on condo, co-op and HOA law.

According to Schneider, living in one of those kinds of communities can mean extra restrictions on use and maintenance of your property compared to those who live in unaffiliated single-family homes.

“I find that the most common disputes are odors and noise-type complaints,” he said. “If you’re in a homeowner’s association where the houses are separated, the disputes might be that you’re blocking their view or you’ve put an item up that’s offensive to them.”

“Try and put yourself in another person’s shoes. Try and resolve your dispute,” he said, because legal intervention can make things much more complicated.

If you’re going to move into a condo, co-op or HOA, Schneider advised that “you have to make sure that you’re going to be comfortable living by rules that aren’t set by you.”

No matter where you live, issues with your neighbors can be frustrating, but the experts said it’s best to try to solve them quickly and non-litigiously whenever possible.

“No matter what the court says, you’re still going to be living next to each other,” McDaniel said.

Steps to settling a property dispute