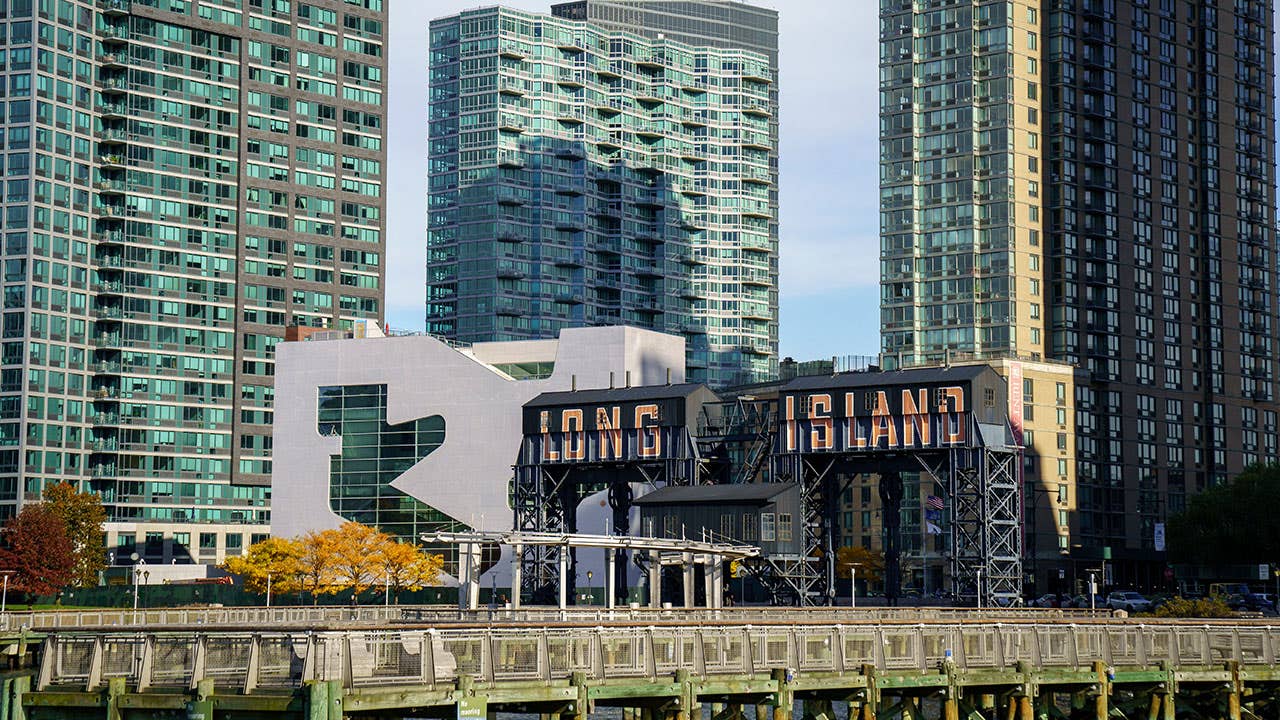 Residents of Long Island City, New York, and Crystal City, Virginia, which will split the Amazon HQ2 spoils, are either rejoicing or lamenting their fate. This tale of two cities focuses on the haves–homeowners–and the have-nots, also known as homebuyers and renters.

For homeowners, Amazon will likely add value to their homes and wealth to their bottom line. Renters, on the other hand, will presumably face higher rent. And everybody will likely cope with tougher commutes as the areas each absorb another 25,000 jobs over the coming decade.

Anyone who is thinking about buying in either of these cities should act quickly as home prices are expected to escalate, says Danielle Hale, chief economist for Realtor.com. Similarly, homeowners in these areas who want to upsize should consider locking in a home sooner than later, especially since inventory is already squeezed in both places.

“Housing is relatively limited in these areas, which are both centrally located. We don’t see a lot of supply. With Amazon coming to town it will make the houses that are for sale that much more expensive,” Hale says. “Crystal City is pretty well-developed and there’s not a lot of space. What was available land-wise is already developed. Some people will have to go out further to find affordable housing.”

Homeowners on Amazon’s shortlist of HQ2 cities probably felt like they were holding lottery tickets, waiting for their numbers to be called. If the real estate markets in Crystal City, which is part of Arlington, or Long Island City mimic what happened in Seattle, then homeowners can expect a bigger payday when they cash out.

“A boost to home prices will bring additional wealth to existing homeowners and a likely surge in mortgage equity withdrawal in years to come,” says Greg McBride, CFA, Bankrate’s chief financial analyst. “But higher prices also mean higher property taxes. The tax bill comes every year but the additional wealth from rising home prices is only realized when the property is sold.” 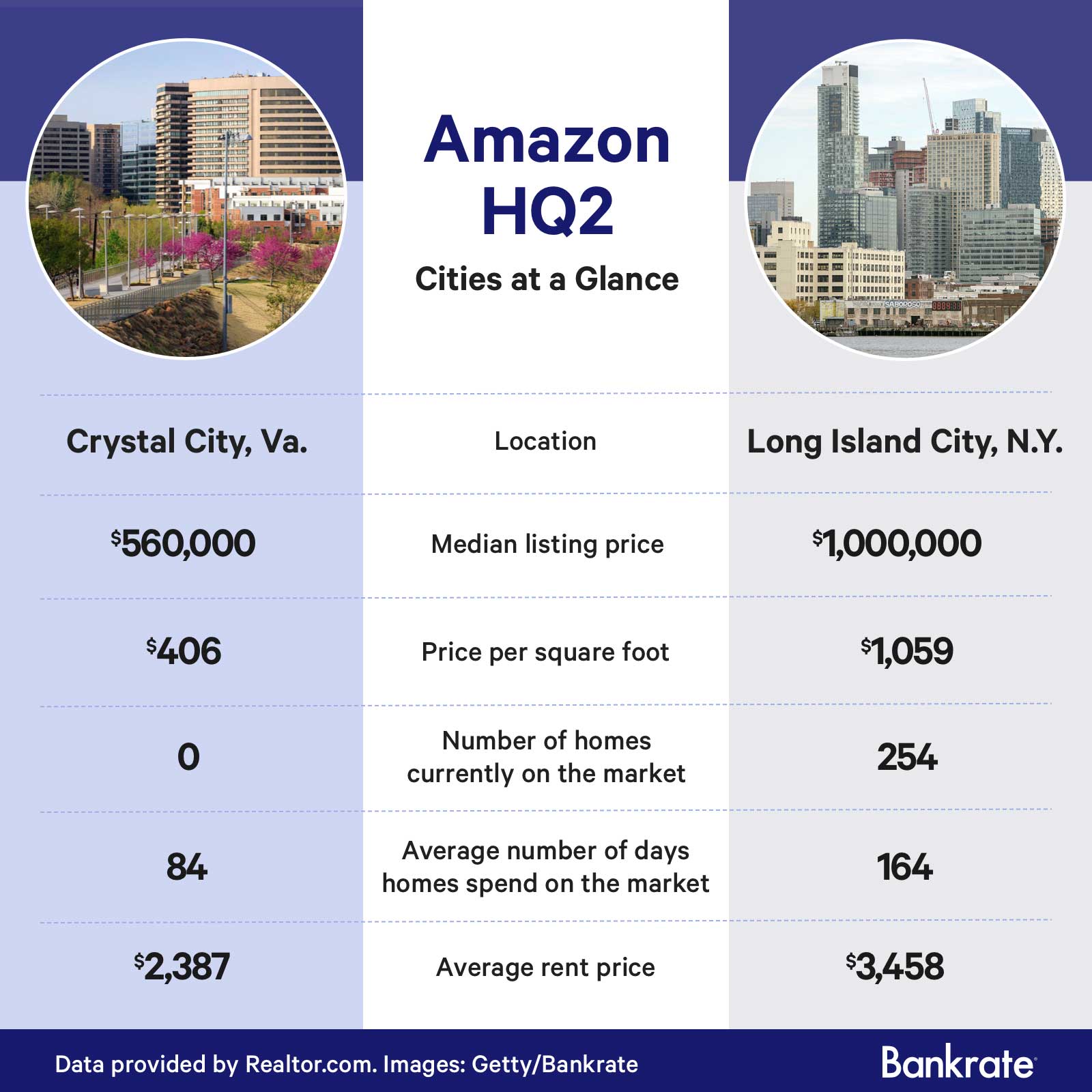 Those who are ready to sell now might want to put that “for sale” sign away, at least temporarily.

The common refrain from experts is to hold onto your property if you can to get more value out of it. Although all signals suggest a spike in home valuations, it could take a while to see those price hikes. The reason is that real estate, as an asset class, tends to move more slowly than the stock market, for instance.

“Long-term, if the growth from Amazon’s expansion pans out, it will bring more people, more jobs, more higher-paying jobs, more demand for real estate and higher real estate prices. But this is a long game, not a short one,” McBride says.

Amazon promises to invest a total of $5 billion in both cities while adding 25,000 jobs at each location with an average annual wage of $150,000. For homebuyers, this translates into more competition from people with relatively deep pockets.

Couple this with rising interest rates and a predicted spike in home prices in both markets and prspective buyers shouldn’t wait too much longer, says Carmen Culliver, sales associate at Weichert Realtors in Arlington, Virginia.

“We’re already seeing more demand in this area. If people want to buy a house here, then I recommend they do it now. It’s just going to get more expensive down the road,” Culliver says.

Although the median home prices in both locations soar above the national home price, which in the third quarter was $266,900, according to the National Association of Realtors’ latest quarterly report, Crystal City is considerably more affordable than Long Island City, which is part of New York City’s Queens borough.

From a budgeting perspective, the consensus is that no more than 28 percent of your monthly income should go toward housing costs. In that case, Crystal City residents will likely have more options. HQ2 Amazon workers who make $150,000 ($12,500 per month) and buy a house for $560,000 with a 6 percent interest rate would spend about $3,400 per month on mortgage costs. At 27 percent of pre-tax income, that’s just under the 28 percent sweet spot.

Conversely, single buyers earning the same income in Long Island City who spend $1 million on a single-family home with a 6 percent rate over 30 years would spend 48 percent of their monthly pre-tax salary.

Buyers in both locations will also face inventory issues, which can make finding a house within their budget that much more difficult.

“An expected boost to home prices would incentivize home buyers and move up buyers to act sooner rather than later. But those same incentives will prompt sellers to wait,” McBride says. “So the inventory shortage that has plagued many real estate markets seems destined to continue – and likely get worse – in the northern Virginia and New York metro areas.”

Renters should anticipate spending even more

Although the infusion of jobs and money into the local economies tends to be generally good for everyone — from the tech industry to hospitality and entertainment–renters often encounter the rough end of the deal.

“Amazon is going to be a windfall for these cities, unfortunately some of the losers in this will be people without the skill set and renters,” says Lawrence Yun, chief economist for National Association of Realtors.

Aaron Hillel, a real estate agent at the Hillel Realty Group in Brooklyn, advises renters to seek out rent-stabilized apartments, which cap rent increases to an estimated 3 to 7 percent per year in Long Island City.

“If you get into a market-rate apartment your rent could go up by $1,000 per month. I would be wary about signing a lease with a market rate apartment,” Hillel warns.

Renters can check the New York City Renters Guidelines Board website for a listing of rent stabilized buildings.

“It’s easy to hop on the blue and yellow line which runs past Alexandria and Springfield up through D.C., north and south. There’s lots of opportunities to find housing outside of the city center,” Hale says.