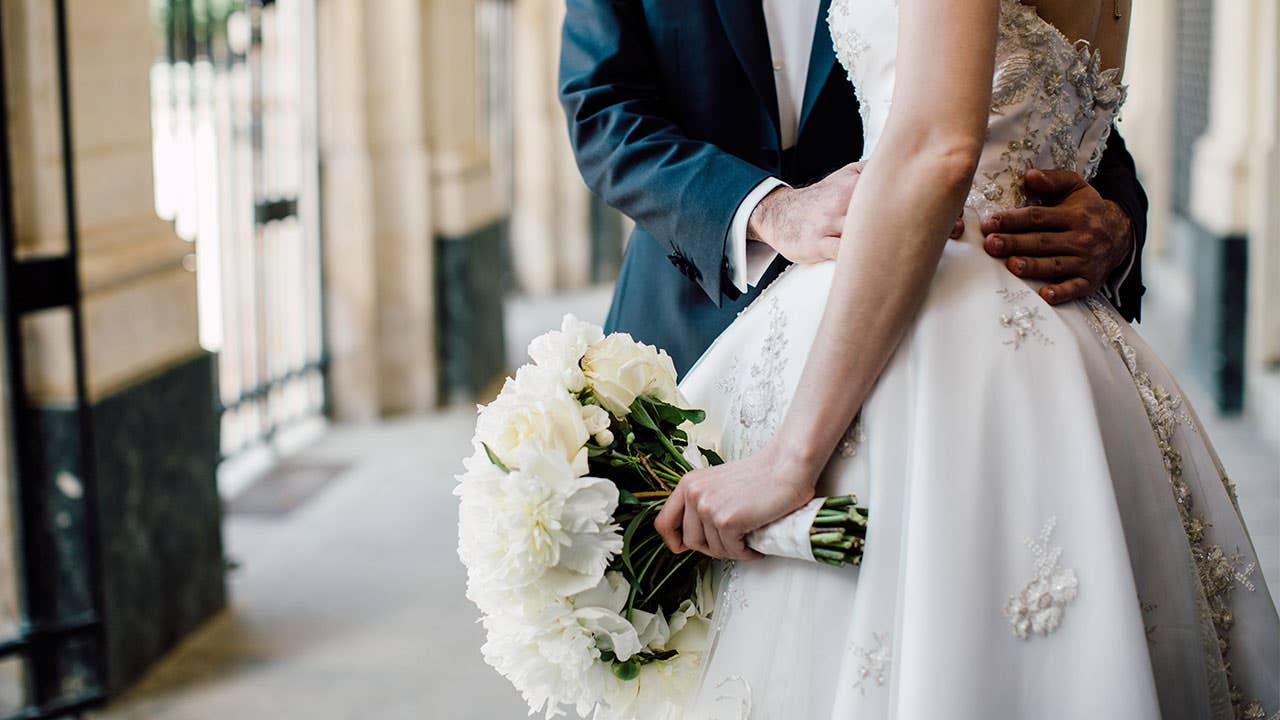 There comes a time in life when the weddings of our friends and family members seem to dominate our calendars and our budgets.

Megan Rooney, a 25-year-old marketing and communications specialist in Troy, New York, is diving into the deep end with an upcoming wedding, her first as an adult. She will be the maid of honor for a childhood friend.

“I have zero experience in that role. I haven’t even been a bridesmaid before,” Rooney says. “It’s been both interesting and overwhelming navigating expectations as well as coming to terms with what is reasonable and manageable with my time, energy and resources.”

That’s right on target, according to a new Bankrate.com report. The survey of 2,228 adults in the U.S. finds that the members of the bridal party spend $728 on average. This figure includes gifts, attire and travel as well as associated events like bridal showers and bachelor parties. Northeasterners like Rooney spend more; there, people in the bridal party can expect to shell out $1,070.

Guests don’t get much reprieve either — attending the wedding of a close friend of family member as a guest costs $628 on average. 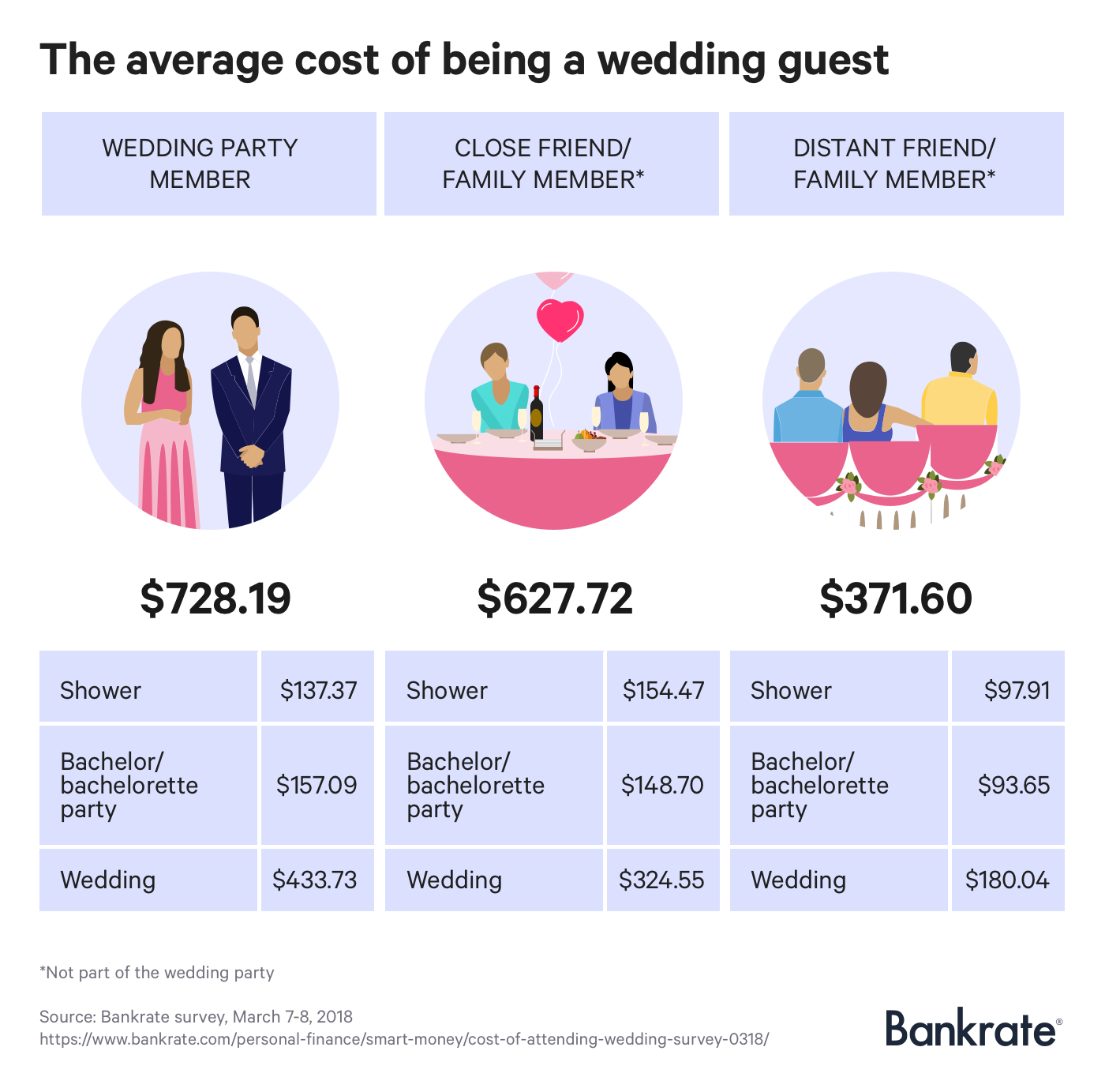 Essentially, we take celebrating the milestones of our friends and family seriously, but this is a tremendous expense. That is especially true in light of recent Bankrate.com findings that say only 39 percent of people could cover an unexpected $1,000 expense with savings.

Here are some tips on navigating wedding season without putting yourself in debt.

Couples tend to send out save the date cards to guests between six to eight months before the event, but is that the right time to start saving?

If you can afford to set aside $100 a month for the wedding after you’ve paid your bills and set aside money for your savings goals, that might be plenty of time to prepare. But if you can’t afford to set aside that much each month or if you’re saving for multiple weddings, you really ought to start planning early.

According to wedding planning website The Knot, the average engagement lasts 15 months. If you start planning from the time the first ring selfie hits social media, you could be in a good position to survive wedding season debt-free.

Is it presumptuous to start saving before you’ve been invited or asked to be in the wedding? Maybe, but there is no real downside — should you get overlooked, you’ll now have some extra dough to spend on yourself.

In hindsight, Rooney says she should have started saving sooner.

“I wish I had taken more time upfront to establish a budget and map out where there are obvious expenses,” Rooney says. “And then also setting aside funds that would go towards more miscellaneous items or things I didn’t consider until they came up.”

Figure out where to put savings

Figuring out when to start saving is only part of the equation, of course. You also need a strategy for where to save. Perhaps you’re disciplined enough to let the money for your best friend’s wedding live in your general savings account, but it might be a good idea to keep it separate.

“I’d suggest opening a dedicated savings account for the expenses you plan to incur and save some of every paycheck there,” says Bankrate’s chief financial analyst Greg McBride, CFA. Indeed, it might be a good opportunity to try out an online bank, which often pay higher interest rates.

Several neobanks and savings apps also allow you to set up specific goals-based pockets in your account for everything from a down payment on a house to a vacation to the Bahamas. Say you’re planning to attend four weddings next summer; you could direct apps like Qapital or Rize to move $20 into the earmarked pools each month.

“I certainly remember having four to five weddings a year and those can be some serious expenses, and it comes as a complete shock, because people aren’t thinking about all the things that add up,” says Justin Howell, CEO of savings app Rize. “So, I certainly understand the pain point, and it is a perfect use case for us.”

Howell and Qapital CEO George Friedman say that saving for weddings is a popular goal on their apps; however, most of those people are likely saving for their own weddings.

While going into debt to celebrate someone else’s milestone isn’t ideal, sometimes you might just have to put some of the expenses on your credit card.

“Can you put a price on friendships that last 25 years or more?” McBride asks. “Going into debt for something like a wedding is a personal decision. Of course, these don’t sneak up; you have time to plan. But even if you need to bridge the gap with borrowing, you have to develop a game plan to pay it off quickly.”

Alongside taking on debt, however, you ought to look for ways to save money where you can. Use points to travel, or take advantage of great sign-up points bonuses on cards.

If Rooney is a rookie at weddings, Jenn Celona, a 33-year-old stay-at-home mom in Nutley, New Jersey, is a battle-tested veteran. And she is brimming with ideas. She and her husband have been invited to seven weddings this year and are planning to attend three.

The groom for one of the weddings has an elaborate bachelor party planned in Atlantic City — her husband opted to skip that and take his friend out to dinner another night. Another wedding has a reception planned in Manhattan. The Celonas are skipping a night at a Manhattan hotel and are planning to take an Uber home. Celona says she’ll re-wear dresses, too, especially when the folks at a wedding in Pennsylvania won’t be at the wedding in Massachusetts.

“We don’t sit down with an Excel spreadsheet, but we definitely look for ways to budget,” Celona says.

Saying “no” is always an option, too. That might mean skipping the destination bachelorette party or just not attending. It’s OK to do this, especially when the costs associated with attending a wedding get in the way of your own financial priorities.

“Ever since I bought a house, I budget for weddings by sending my regrets,” says Connor Tapp, a 32-year-old sports editor in Nashville, Tennessee. “Recently said no to a very good friend from college’s wedding in Connecticut this summer, which I would have absolutely found a way to attend five years ago.”

Bankrate.com commissioned YouGov Plc to conduct the survey. All figures, unless otherwise stated, are from YouGov Plc. Total sample size was 2,228 adults. Fieldwork was undertaken between March 7–8, 2018. The survey was carried out online. The figures have been weighted and are representative of all U.S. adults (aged 18+).