The Biden-Harris administration recently unveiled a three-part student debt relief plan, which includes mass student loan cancellation. It is estimated that 43 million borrowers will get some relief, with as many as 20 million getting the remainder of their student loan balances forgiven. Here’s what to know about the impact this could have on Americans.

National Center for Education Statistics data shows that the cost of going to college in the U.S. has nearly tripled over the last four decades, even after accounting for inflation. According to College Board, resident students at four-year public institutions now spend an average of $27,330 a year in college expenses, while nonresident students spend an average of $44,150. Students at four-year private institutions spend even more: a whopping $55,800 a year.

But although pricing for college has continued to increase, federal student aid hasn’t. The Center on Budget and Policy Priorities estimates that the Pell Grant used to cover almost 80 percent of the cost at four-year public colleges in 1975 but now covers less than one-third of the cost. This lack of financial aid coupled with the ever-growing cost of college has forced many students — especially those coming from low- and middle-income families — to borrow money to pay for their degrees.

A recent analysis by the Department of Education found that the average undergraduate student leaves college with $25,000 in student loans. This, in turn, has triggered a national crisis, with federal student debt reaching $1.6 trillion and affecting more than 45 million Americans from all walks of life.

However, for millennials and Gen Z, the burden of student loans has been particularly crushing. According to a Bankrate survey, student loans have hindered this demographic not only from building wealth and bulking up their savings, but also from achieving important milestones, such as buying a house, getting married or having children.

Although student loan balances have increased across the board, how much students borrow varies greatly depending on the state they go to school. For instance, 2019-20 graduates who attended schools in New Hampshire left school with an average of $39,928 in student debt, while those who attended schools in Utah left school with an average of $18,344, according to The Institute for College Access & Success (TICAS).

During his presidential campaign in 2020, President Joe Biden promised to cancel $10,000 in student loans for those who needed it most — a promise that was fulfilled on Aug. 24, 2022.

The White House estimates that 43 million borrowers will benefit from the student debt cancellation announcement, 20 million of which getting their balances completely wiped out.

Although the administration’s actions have been met with a lot of praise, there’s also been some stark criticism. On the one hand, representatives for borrower advocacy groups have said that $10,000 is just a “drop in the bucket” for many borrowers, stating that more relief is needed. On the other hand, Committee for a Responsible Federal Budget President Maya MacGuineas called the announcement “gallingly reckless,” saying that mass cancellation will only drive spending upwards, worsening both inflation and the national debt. Meanwhile, others feel that the announcement is unfair for those who sacrificed for years to pay off their debt without relief.

There are both positive and negative impacts tied to Biden’s student debt cancellation plan.

According to a Bankrate survey, roughly 60 percent of U.S. adults have put off major financial decisions, such as saving money for retirement, getting married, having children and buying a house, due to their student loan debt.

Justin Draeger, president and CEO of the National Association of Student Financial Aid Administrators (NASFAA), says that although $10,000 in debt relief may not be enough for some, it will wipe out a significant amount — if not all — of student loan debt for a large number of borrowers. This means that they’ll be better positioned to build wealth and achieve important life milestones.

Advancement in gender and racial equity

Historically, the burden of student loans has disproportionately affected both women and people of color. In fact, a study by the American Association of University Women found that in 2019, women owned nearly two-thirds of the nation’s student loan debt. Additionally, because of the gender pay gap, women face more difficulties when it comes to paying off their loans, as they don’t have as much disposable income as men.

By offering additional relief to Pell Grant recipients, the administration is advancing equity for these demographics, as Black students and students of color are more likely to be Pell recipients than their white counterparts, according to the Urban Institute.

Relief for borrowers of all age groups

Student loans are not just a problem for young adults. The Department of Education estimates that more than one-third of the borrowers who will get relief are age 40 and up, including 5 percent who are senior citizens. Forty-four percent are between the ages of 26 and 39, and only 21 percent are 25 years old or younger.

Less financial strain for both low- and middle-income households

Because relief is targeted toward those earning less than $125,000, student loan cancellation will only benefit low- and middle-income households. In fact, the department estimates that roughly 90 percent of relief dollars will go to borrowers who earn less than $75,000 a year.

An improvement on borrowers’ mental health

Because student debt often plays a big role in preventing borrowers from achieving important milestones, borrowers may struggle with increased levels of anxiety and depression. By eliminating a good chunk of their loan balances, Biden’s student debt relief plan would help ease the stress and tension borrowers in distress often face, improving their overall mental health.

One of the biggest criticisms the administration has faced regarding the student debt cancellation plan is that it will come at an “astronomical” cost to the U.S. government. The Committee for a Responsible Federal Budget says that canceling student loans, in addition to the other proposed changes to income-driven repayment plans, would cost the U.S. government between $400 and $600 billion.

Since the past two administrations and Congresses already spent about $300 billion between the six previous payment pauses, this would bring the total tally to between $700 and $900 billion, while not implementing real change to college affordability.

Inflation is at its highest point in 40 years, which has made everything more expensive. The Committee for a Responsible Federal Budget, along with other groups, have argued that canceling student loans will only make inflation worse by increasing spending. This, in turn, could put us in a recession faster than expected.

But this is still up for debate. The Roosevelt Institute has stated that canceling student debt will increase wealth — not inflation — as a lot of people will be bulking up their savings, not spending recklessly.

Any amount of student debt forgiven between 2021 and 2025 is exempt from federal taxes, thanks to the American Rescue Plan Act, but the same can’t be said for state taxes.

Borrowers living in Arkansas, Minnesota, Mississippi, North Carolina and Wisconsin could face a higher state tax bill, as these states will count any amount forgiven as part of borrowers’ ordinary income, according to the Tax Foundation.

Student loans have been an issue for quite some time, and thousands of borrowers had to make sacrifices to claw their way out of debt.

Nadine Burns, founder and CFP at A New Path Financial, says that while she does not begrudge borrowers for getting forgiveness, she cannot help but feel that the announcement is unfair to those who paid off their debt without any help.

“Some folks worked a second job on weekends to get rid of that debt, went into the military or lived with family members for a longer period of time,” Burns says. “I personally had student loans for both undergrad and my MBA — I paid them all back — even during the time I was a single mom and had to downsize my house because I could not afford all the payments I was facing. People like myself and others who paid for school, refinanced their debt to a lower interest rate, or even went to school on the GI bill are feeling very robbed with this announcement.”

Although Biden’s plan has received some criticism, one thing’s for sure: Millions of Americans, especially those who need it the most, will benefit from student loan cancellation. For many, getting their debt canceled will also be a key driver to achieving milestones they’ve been putting off for years. 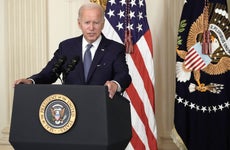 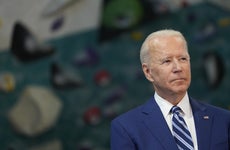 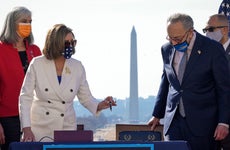