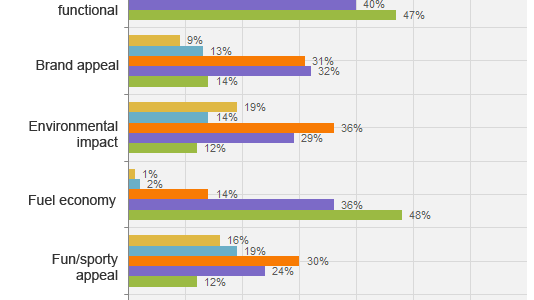 The economy is still weighing heavily on consumers who are considering a car purchase in 2011, according to a recent auto survey by Bankrate.com.

More than a quarter of all survey respondents plan to purchase a car within the next year, but almost a third are taking a more conservative approach and are planning to take more than a year to do it.

Bankrate’s survey was conducted online from May 23 to June 1, 2011, with 1,289 subscribers of at least one of Bankrate’s online newsletters participating. It is not a nationally representative sample. Rather, the survey was aimed at learning how Bankrate readers conduct research on cars and use that information to make a purchase.

Smart drivers will do their homework before they buy, says Greg McBride, CFA, senior financial analyst at Bankrate. “A car purchase is a big purchase and going into it blindly is to your own financial detriment,” he says.

Here’s a look at the survey’s major findings, and key messages that car shoppers are taking to the dealer.

Not surprising, the pricing of an auto is a top concern for car shoppers, with 65 percent of respondents reporting that it is a “very important” factor in their decision-making. But it isn’t the only consideration. In fact, almost half — 48 percent — of respondents gave the same weight to fuel economy as an important factor in making their next car purchase.

When shopping for an auto, how important is each of the factors in your decision?
Source: Bankrate.com

This shows that car shoppers also consider how much a car will cost them after they drive it off the lot, McBride says. “The economic events of the past couple of years have made consumers more focused on total cost of ownership and not just the total price tag or monthly payments,” he says.

With a slow economy and high unemployment fresh on everyone’s minds, the economy has changed respondents’ auto leasing or buying patterns. A third, or 32 percent, say they’re postponing buying or leasing a new car.

What type of car are you in the market for? 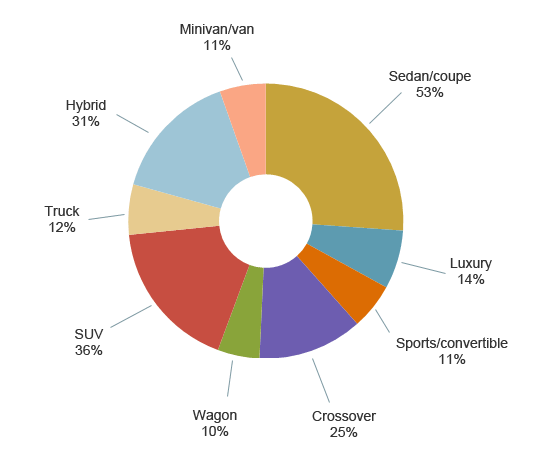 Three out of four participants are considering cars that cost less than $30,000 and almost a third are looking at cars at $20,000 or less.

Honda and Toyota are the most popular brands in our car-buying survey, with 46 percent of participants saying they are considering these types of autos. Other popular brands are Ford (41 percent), Chevrolet (29 percent) and Hyundai (26 percent).

A sedan or coupe model is the most popular type of vehicle for car shoppers, with more than half of the respondents — 53 percent — favoring this category.

With fuel prices rising, it might seem that gas-guzzling SUVs would fall out of favor.

But SUVs are the second most popular choice, with 36 percent of respondents saying they are in the market for one. McBride says drivers with families and extended families still have a need for larger autos, including SUVs.

The Internet has become a major tool for conducting car-shopping research, with more than half of respondents (56 percent) saying they rely heavily on researching autos online at home. Indeed, 38 percent say they’re willing to purchase their next auto online and never actually touch the car until delivery.

Whether people use online resources for research or to actually buy their vehicle, car shoppers who do their homework in advance can get better deals, McBride says.

“Being an educated consumer is giving yourself more power. The more you know what’s out there and what’s available, the better position you’re going to be in,” he says.

Many consumers consider now to be a good time to buy a car as auto loan rates are at near-record lows. Potential buyers are able to get a car loan with an average interest rate that’s slightly more than 4 percent for a 48-month loan, according to Bankrate’s auto loan rate tool.

How do you plan to pay for your next auto purchase? 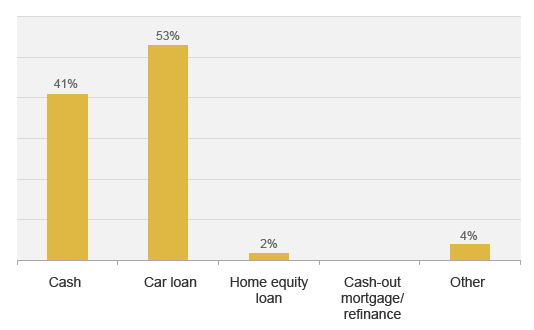 But many survey participants don’t think these low annual percentage rates will last. According to the survey’s findings, 44 percent of participants say they expect auto rates to rise within a year.

While more than half of the survey’s participants (53 percent) plan to take out a car loan to finance their next purchase, a whopping 41 percent say they’ll pay cash for their next vehicle.

McBride says those survey respondents may have the resources to pay cash because they have held on to their current cars for a long time. According to Bankrate’s auto survey, two-thirds of those surveyed (67 percent) say they buy or lease a new car every six years or more.

“We drive cars until they die of old age,” one survey respondent says.