If you’re a parent, adding a newly-minted teen driver to your car insurance policy can come with serious sticker shock. In the U.S., when two parents add a 16-year-old teen to their full coverage auto insurance policy in 2021, their premium will increase by $2,531 annually on average. This brings their total annual premium to $4,156 per year, according to Bankrate’s analysis of rate data obtained from Quadrant Information Services in more than 6,800 ZIP codes in major U.S. metropolitan statistical areas (MSAs).

In terms of the percentage of added cost, the two most expensive metropolitan areas in the United States in 2021 for parents adding a teen to their car insurance policy are San Francisco and Los Angeles. In San Francisco, the average cost for a full coverage insurance policy including two parents and their teen driver is $6,127 per year, 168% higher than the standard average rate for those same parents without a teen on their policy in the city of $2,281 per year. In Los Angeles, a similar auto policy costs $7,026 per year, 164% higher than the standard average L.A. rate for the same couple of $2,655. Parents adding a teen driver to their policy in both cities pay an average increase of around $4,000 more per year. And these rates do not include adding an additional vehicle to your policy for your teen to drive, which is even more expensive.

Most expensive cities for car insurance with a teen driver

Based on premium increase percentages when adding a teen to your car insurance, San Francisco, Los Angeles, San Diego, Boston, Phoenix and Pittsburgh are the most expensive cities, with full coverage policy rates increasing between 136-168% on average.

Due to their inexperience behind the wheel, teenage drivers pose a significantly higher risk for car insurance claims. In addition, geography influences car insurance premiums for several reasons. For one, the cost of living varies widely among U.S. cities. Basic needs such as housing, food, taxes, health care, and insurance cost a lot more in San Francisco or Los Angeles than in a more sparsely populated city like Bozeman, Montana. In cities with a higher cost of living, vehicle repairs typically cost more, too.

Major cities also have more traffic and, as a result, more collisions (in which teenage drivers are more likely to be involved than experienced drivers), which can increase your premium. Cities with higher crime rates can also drive rates higher in general due to the increased risk of theft or vandalism.

Every state handles insurance rates differently, so the factors above may affect rates more in some areas than others.

Los Angeles, coming in just slightly lower than San Francisco in terms of price hikes for families with new teen drivers, faces challenges similar to San Francisco regarding traffic and cost of living. L.A. claimed the number one spot for CBS’s worst cities for traffic. The City of Angels is also the 11th most expensive city to call home in the U.S. and claims USA Today’s number 18 spot for worst cities to drive in. L.A. parents pay an average of 165% more after adding a teen to their car insurance policy.

California cities continue to dominate our list of most expensive cities for parents with teen drivers as San Diego claims the third spot. This coastal metropolis is the sixth-worst city to drive in, according to USA Today. The city’s infrastructure is poorly planned, and the roadways are deteriorating and congested, according to NBC 7 San Diego. Parents in San Diego pay an average of 161% more for car insurance once they add their teen to their policy.

Switching over to the East coast, Boston ranks as the fourth most expensive city in our study and has the eighth-highest cost of living of any U.S. city. Massachusetts also ranks ninth for worst infrastructure in the United States, according to CNBC. On average, Boston parents will end up paying around 145% more, or $2,318 more, for their auto insurance after adding their teen.

Pittsburgh ranks sixth among the most expensive cities on our list. The city is also home to three of the deadliest road segments in the state of Pennsylvania, according to the Patriot-News. Although Pittsburgh’s average annual cost for full coverage car insurance for a married couple alone, $1,619, is slightly lower than the national average of $1,674, the city’s average car insurance costs are significantly more expensive for parents of teen drivers, who pay an average of $3,828. Parents in Pittsburgh pay an average of 136% more for their car insurance after adding a teen.

Least expensive cities for car insurance with a teen driver

On the other end of the spectrum, the least expensive cities if you have a teen driver on your policy are Cleveland, St. Louis, Kansas City, Minneapolis, Detroit and Washington D.C. While these cities generally have a lower cost of living, Washington D.C. actually has the sixth-highest cost of living in the U.S. Still, other factors, including reliable public transit, seem to contribute to lower average costs for car insurance, both with and without a teen on the policy.

Washington, D.C. is the cheapest city on our list for adding a teen to your car insurance in terms of the percentage of added cost, which may be surprising since the city is known for its high cost of living. However, according to Metro Magazine, Washington, D.C. has the third-best public transit system in the U.S., allowing residents to drive their vehicles less, including teens. The city also recently saw the largest drop in traffic of any large U.S. city during 2021, leading to fewer accidents.

Detroit comes in as the second least expensive city in our study. Although Detroit has the highest rate on our list for parents of teen drivers in terms of dollar amount, that is mainly because car insurance in Michigan is expensive in general. Despite the city’s overall expensive rates, Detroit parents of teens will pay an average of 102% more for car insurance, one of the lowest percentage hikes in our study. In terms of cost of living, Detroit is the second most affordable large city in the U.S., according to Inc.

Minneapolis is the third-least expensive city on our list, and, although it has a relatively high cost of living, it also claims the 8th best public transportation in the U.S., according to Metro Magazine. Its high-ranking rail system allows residents to bypass car travel, which might help residents save on their auto insurance in general.

Kansas City offers the fourth-cheapest insurance increase for parents with teen drivers on our list. One reason for its cheap insurance may be that Missouri ranks in the top three states for best highway systems in the U.S., according to the Reason Foundation’s 24th Annual Highway Report. In addition, Inc. ranked Kansas City as one of the cheapest cities where you can live comfortably for less than $50,000 a year.

St. Louis is the fifth-cheapest city on our list for parents adding a teen to their car insurance policy. The city has the 17th highest score for public transit in the U.S., coming in behind only four other Midwestern cities. The city’s enviable public transportation system may be one reason that its residents save money on car insurance. And Inc. named St. Louis one of the cheapest large cities in the U.S.

How does your city rank if you have a teen driver?

How can you lower your car insurance rates if you have a teen driver?

Adding a teen driver to your car insurance policy could increase your premium by thousands of dollars. Luckily, finding cheap car insurance for your teen is still a possibility. You may be able to save a significant amount of money by doing your research ahead of your teen getting their driver’s license.

Here are a few potential ways to save:

What other factors can affect your car insurance rates?

Besides geography, countless other factors can affect the price you pay for car insurance, with or without a teen on your policy. Common factors that could play a role in determining your insurance premium include:

Keep in mind that the way car insurance companies calculate rates is constantly changing. Several states have begun to ban the use of factors unrelated to driving in premium calculation.

For instance, gender and credit score are not always rating factors in every state. Maryland, Oregon and Utah restrict the use of credit as an auto insurance rating factor, and the following states do not allow credit scores to be used to determine your auto premium at all: California, Hawaii, Massachusetts, Michigan and Washington (temporarily).

And these states do not allow gender to be used in determining your premium: California, Hawaii, Massachusetts, Michigan, Montana, North Carolina and Pennsylvania. Hawaii also does not allow age to be used as a factor.

An insurance professional, like a licensed agent, can help you understand what rating factors are considered in your area. Regardless, getting several quotes from different car insurance companies is one of the best ways to find the best deal for your circumstances.

Bankrate utilizes Quadrant Information Services to analyze rates for ZIP codes from the top 25 metropolitan statistical areas (MSAs) and carriers in all 50 states and Washington, D.C. Quoted rates are based on the additional cost of a 16-year-old male and female teen driver added to their 40-year-old parents’ policy (with clean driving records, good credit where applicable and the following full coverage limits):

Rates are determined based on 2021 Quadrant Information Services data.

Gender: The following states do not use gender as a determining factor in calculating premiums: California, Hawaii, Massachusetts, Michigan, Montana, North Carolina, Pennsylvania.

Credit: The following states do not use credit or restrict the use of credit in calculating premiums: California, Hawaii, Maryland, Massachusetts, Michigan Oregon, Utah and Washington. 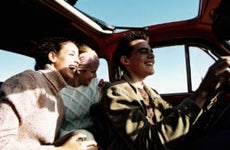 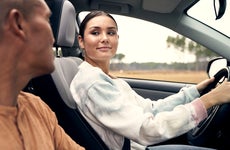 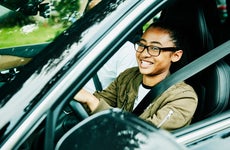 Cheap car insurance for teens in 2022 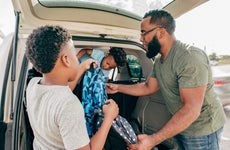 Factors that impact your cost of car insurance