3 min read Published May 09, 2022
Written by
Lara Vukelich
Written by Lara Vukelich Insurance Contributor
Lara Vukelich is a freelance writer who has written for Bankrate, Huffington Post and Quiet Revolution to Expedia, Travelocity, and MyMove. She is based in San Diego, California.
Lara Vukelich
Edited by
Troy Segal
Edited by Troy Segal Senior homeownership editor
Troy Segal is Bankrate's Senior Homeownership Editor, focusing on everything from upkeep and maintenance to building equity and enhancing value.
Troy Segal

If your sink is clogged, you’ll know it sooner rather than later. The signs are clear: water that drains very slowly, or even stands still. You wash a few dishes, and suddenly you’re staring at a soapy, dirty pool. Or the tub is half-full, one hour after you exited the bath.

Now, what do you do about it?

While a clogged sink is definitely annoying, it doesn’t always require spending $200 for a plumber (HomeAdvisor’s national average cost). Learning how to unclog a sink may help you resolve the issue by yourself.

Here are some methods to resolve a clogged sink — worth trying before you call in the pros.

When your water isn’t draining as it should, there is probably a clog somewhere in the pipes. Along with the sight of stagnant water, be alert to odors:  If you notice a bad smell coming from your drain, a full blockage may also be around the corner.

Consider the most likely cause of your clog before you choose a method of remediation. That’ll suggest the best way to handle it. Here are some of the most common reasons for a drain clog:

How to unclog a sink by yourself

In some mild cases, a drain cleaning liquid (think Drano or Liquid Plumr) will work to clear a sink clog. They contain chemical agents which generate heat and gas that dissolve many blockages, including those caused by hair and soap scum. However, these agents can also harm pipes in the long term. Because your drain cleaner targets anything in its way, it will also eat away at the inside of your pipes.

Occasional use of a commercial drain cleaner may not lead to any issues — but if you’re using it often, the toxic chemicals will take their toll. PVC pipes are especially at risk for drain cleaner damage. Try this solution once but move on quickly if the clog persists. With older pipes, you may want to skip drain cleaner altogether.

If you have a slow moving or blocked drain, these DIY fixes just may come in handy.

When you’re working with a slow-moving drain, a simple solution of hot water and dishwashing liquid soap may clear the clog. This tactic is helpful when grease or fat is the culprit in your drain; dishwashing liquid is designed to break up grease. First pour up to one cup of dish soap down the drain and then follow it with very hot water. Don’t try this if the drain is completely backed up, because the soap won’t be able to move down the pipes.

2. Break out your plunger

You are used to using a plunger in your toilet. You may want to keep a smaller one on hand for your sink. If a small food pile-up or other blockage is stuck in the p-trap just under your sink, plunging may create enough suction to push it through.

Before you try this method, you’ll want to bail most of the water out of your sink. But don’t do it if you’ve already poured a chemical agent down your sink to clear the clog. This could cause the chemicals to splash up and land on your skin. Plunging may work best if you have a single object clogging your drain, like a paper towel or piece of food.

A drain snake is a long wire or thin piece of plastic with a hook on the end. AKA an auger, a snake may also have several hooks or cutters along the side. Remove the drain stopper or strainer and feed the snake down the drain. When you reach resistance, pull the snake slowly back up. The hooks will catch any hair and debris that may be clogging your pipe. Be careful not to force an auger down too far, though. This could inadvertently push a larger blockage down into your pipes.

Snakes are most effective if you suspect a hair blockage.

Your sink’s trap is the part of the pipe that is shaped like a “P” or “S” right under the sink. This is where the majority of clogs happen. If the other methods fail, you can unscrew the connectors on the curved pipe to remove a section of the trap. Place a bucket under the trap before you remove a piece of the pipe; any of its contents may fall out. You can also use a snake from this angle to dislodge an obstruction.

When to call a plumber

When chemical methods, snaking, plunging, and loosening the trap don’t work, it’s time to call a plumber. If you suspect that the problem is external, like a tree root growing through a pipe and causing a backup, you’ll also need professional help.

Or, if the signs are starting and you know that a significant something recently went down the drain (your spouse admits that a few chicken bones may have, uh, fallen into it), stop using the sink immediately and call for help. You may end up doing more harm than good if a major blockage is present.

SHARE:
Written by Lara Vukelich Insurance Contributor
Read more from Lara
Lara Vukelich is a freelance writer who has written for Bankrate, Huffington Post and Quiet Revolution to Expedia, Travelocity, and MyMove. She is based in San Diego, California.
Edited by
Troy Segal
Edited by Troy Segal Senior homeownership editor
Troy Segal is Bankrate's Senior Homeownership Editor, focusing on everything from upkeep and maintenance to building equity and enhancing value.
Troy Segal
Senior homeownership editor 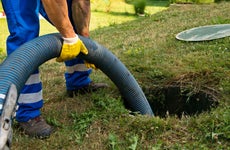 Buying a house with a septic tank: Everything you need to know 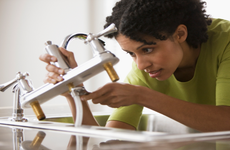 How to install a kitchen faucet 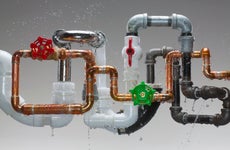 Which plumbing pipes cost the most money? 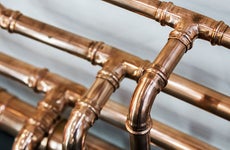 How much does it cost to install or replace plumbing?