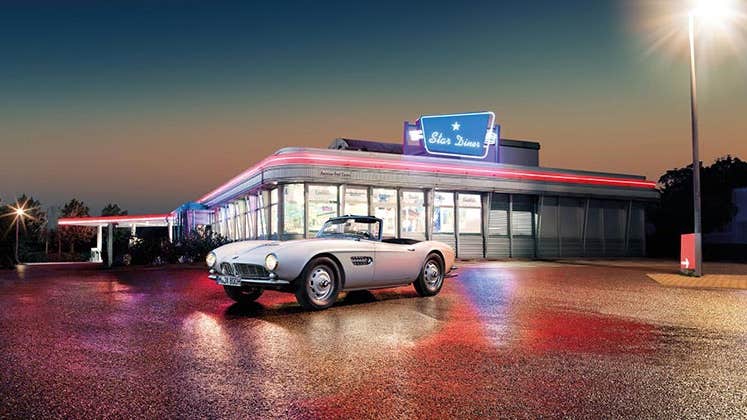 A rare, fully restored BMW 507 owned by Elvis Presley that was lost for more than 5 decades was shown Sunday to the public for the first time at the world-renowned Concours d’Elegance in Pebble Beach, California.

Elvis’ BMW 507 was one of just 254 built between 1955 and 1959. BMW Group Classic spent 2 years restoring the roadster to its original condition after an unusual turn of events caused the car to resurface after 50 years.

The original owner of the car was race car driver Hans Stuck, who piloted the BMW to win several hill-climb races in Germany, Austria and Switzerland during the first year of the car’s life. During his ownership, it also won an award at a well-known “automotive beauty” competition and was used in the feature film “Hula-Hopp Conny.”

Elvis bought the car in the fall of 1958 from a dealer in Frankfurt, Germany, as a 23-year-old U.S. soldier. Shortly thereafter, it was given a registration from the U.S. military, which changed every year, resulting in the car getting “lost.” After extensive research by BMW Group Classic and American journalist Jackie Jouret, a writer for Bimmer magazine, the car’s history has been fully verified.

Elvis drove the 507 between his home in Bad Nauheim to the U.S. Army Base in Friedberg, Germany. When he returned home in 1960 he traded the car in at a Chrysler dealer in New York, which, in turn, sold it to radio moderator Tommy Charles. After outfitting the car with a Chevrolet engine, Charles launched a successful racing career with it, winning a major race in Daytona Beach, Florida, before selling the car in 1963.

The car eventually ended up with space engineer Jack Castor, who was also a car collector. Castor drove it occasionally before storing it in a pumpkin warehouse with plans to restore it. Though he had collected numerous parts for the car’s restoration, it was still in storage when he happened upon a magazine article by Jouret about Elvis’ lost BMW 507. Castor realized that the car he owned had the same chassis number Jouret had uncovered and the pair met at the warehouse to look at the car. Very quickly, Jouret became certain that this car was, indeed, the car owned by Elvis.

After further investigation, the car’s full history was traced and BMW Group Classic embarked on a 2-year project to restore the BMW 507 to its original condition, using many of the parts that Castor had gathered, as well as building a complete 3.2-liter V-8 engine from spare parts to the specifications of the original engine.

Today, the 150 horsepower, all-aluminum engine sits under the bonnet of the Feather White roadster. It features a black and white interior with a Becker Mexico radio and center-lock rims.