Can you afford the new 2017 Mercedes E-Class? 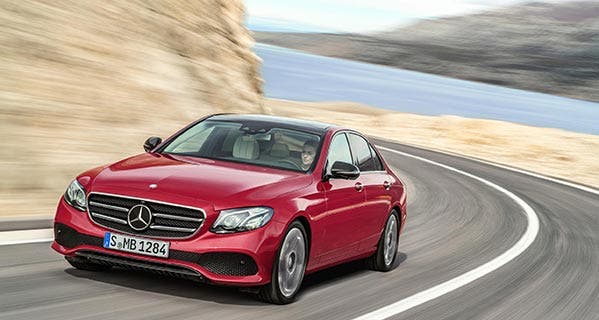 Mercedes-Benz has been saying that it’s taking a “big step” into the future with its new E-Class and took the opportunity before the car’s official introduction to show the world a sneak peek in this video (shown above).

Introduced yesterday during the media days of the 2016 North American Auto Show in Detroit, the 2017 Mercedes-Benz E-Class marks the beginning of the 10th generation of this iconic luxury sedan.

Despite its 4 doors, the new E-Class has a coupe-like design that is complemented by a luxurious interior replete with high-tech features, including touch-sensitive controls on the steering wheel that operate with swiping movements similar to a smartphone to operate infotainment features without removing your hands from the steering wheel.

Perhaps the most unique features on the new E-Class show Mercedes’ progression toward autonomous driving. Drive Pilot allows the car to follow the vehicle in front of it at a selected distance at speeds of up to 130 miles per hour, while Steering Pilot provides steering assistance even on moderate bends in the road, including when there are other vehicles and parallel structures nearby, even if the lines on the road are unclear or nonexistent.

Other high-tech safety features include Attention Assist, which warns the driver of drowsiness or inattentiveness; Active Brake Assist, which warns of impending crashes and can apply the brakes automatically if necessary; and Pre-Safe Sound, which emits a short interference signal through the car’s sound system when there is a risk of collision to trigger a reflex in the ear that prepares the ears for the expected sound of a crash.

While pricing has not yet been announced, the 2016 model has a starting price of $52,650, and the new model will likely be priced similarly when it goes on sale this summer.

While that is substantially more than the current average of $34,428 for a new car, according to Kelley Blue Book, it is on the low-end for a luxury car. And with a current national average of just 3.29% for a 5-year (60 month) new car loan, according to Bankrate’s latest data, most of the monthly payment goes toward the principal and not interest.

If you are pining for the new 2017 Mercedes E-Class and are wondering if it’s too rich for your wallet, read How much can you afford?