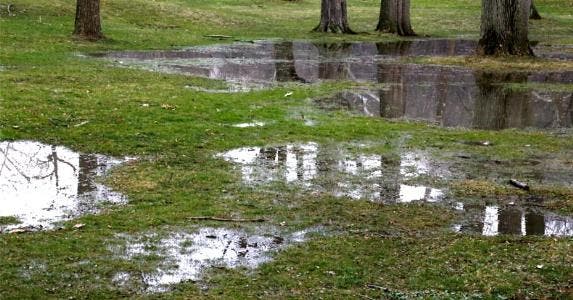 Dear Real Estate Adviser,
I live in a small Midwestern town. The city recently changed the flow of water drainage into my property due to new development and now it floods during strong storms. What can I do?
— John C.

Dear John,
In general, finding someone to right such a wrong in this type of situation can be a challenge, especially in your case. When researching your question, I found accounts in your local newspaper in which the city appeared to be downright unhelpful in addressing a similar complaint from a different household last decade.

In that instance, the city/developer inadvertently rechanneled runoff from a construction project that featured a sizable amount of new impervious (cement) pavement, water that would have previously been absorbed by the ground. Some of that got directed to a resident’s yard, which suddenly was flooding several times a year. Responding to the resident’s complaint, the city told the paper that the homeowner “refused” to pay half the cost for thousands of dollars in remedial grading changes that would address the problem while the nonplussed homeowner said she never even got such an offer. The resident finally hired a lawyer and it’s not clear how or if the issue was ever settled.

This is not an uncommon problem in small towns, which often don’t have the plans, examiners or other professional staff to adequately assess development-related drainage and flood risks. If a development isn’t large enough (such as a Wal-Mart) by city ordinance to warrant a drainage study, cities tend to green-light developer plans with only a cursory examination of water drainage consequences. And often, resultant errors aren’t discovered for months or even years, depending on the severity of weather.

Yes, you could try suing the city like your fellow resident, but that could be expensive and fruitless. Plaintiffs have had mixed results at best in lawsuits stemming from this sort of thing.

If a lawsuit seems too expensive and (or) potentially futile, especially given your city’s spotty history, you might consider just hiring a landscape architect who could help devise a better water drainage plan for your property that won’t negatively impact neighbors, of course.

A re-grading, possibly including a small hill (or “berm”) that will divert runoff around vulnerable parts of your property, or the installation of French drains might be better and cheaper ways to remedy the situation. While it may seem galling that you have to pony up for this despite the fact that the city/developer caused the problem, it might just be the best solution for now instead of riding out a lawsuit and watching your home get ruined by a major storm in the meantime.

But I’d also suggest advising the city and developers by registered letter of your plans to protect your property from their actions, then sending them a copy of the bill for services rendered afterwards, telling them you’d like to keep this out of the media if possible. How far you push this beyond that is up to you, of course.