Like NFL linebackers and negative political campaign ads, bounced-check fees hit a little harder every year. For the first time, the average nonsufficient funds, or NSF, fee broke $30 in Bankrate’s 2010 Checking Study, ringing in at $30.47.

But unlike food, gas and other essentials affected by inflation, bounced-check fees are easier to avoid, thanks to a variety of new tools from banks to help you keep track of your balance, says McBride.

“With 24-7 online account access, it’s imperative that consumers keep close tabs on their available account balance,” says McBride. “You can sign up for e-mail and text alerts that will tell you if your balance gets below a certain threshold.”

If you’re still afraid you’ll overdraw, McBride says to request a link between your checking account and your savings account. “That way, if you overdraw the account, it’s a matter of moving your money from one account to the other, not borrowing from the bank to cover the shortfall,” he says.

For those who do slip up and incur bounced-check fees, some help may be on the way from the Federal Deposit Insurance Corp., or FDIC. The agency recently announced new guidelines covering how bounced-check fees should be handled for the banks it regulates. Those guidelines would, among other things, ask banks to stop reconciling a day’s checking account charges from greatest to least. 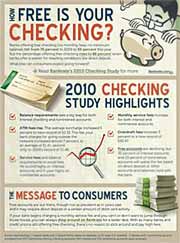 Changing the way a bank clears its checks may seem like a small change, but if you have the misfortune of being overdrawn on a day when multiple checks are cashed, it could make a big difference in the total fees you have to pay.

For example, say you write checks for $50, $40 and $200, and they are all cashed in that order on a day when you have only $100 in your checking account. Under the greatest-to-least policy, your $100 balance would be wiped out by the $200 check, leaving the $50 and $40 to also bounce, despite the fact that they were cashed first. The end result? Bounced-check fees averaging around $90.

Under the upcoming FDIC guidelines, those checks would instead be reconciled in the order received or by check number, either of which increase your chances of only one NSF fee.

Of course, regardless of how bounced-check fees are handled, the best strategy is to avoid them altogether, says McBride.

“Overdrawing your account is a slip-up anybody can make once. The key is, if you’re going to make it, only make it once and minimize the cost of it. And the way to do that is to have a link to your savings account,” he says.

The 2010 Bankrate Checking Study data are gathered by surveying the top 10 banks and thrifts in 25 of the country’s biggest markets. We asked those institutions about terms on one generic noninterest account and one interest-bearing account most applicable to the general consumer.