Alex Goff appears to be a typical guy.

He’s an exercise physiologist at OhioHealth and lives about halfway between Columbus and Cleveland in Mansfield, Ohio, earning a bit more than the average Mansfield resident. He’s engaged to be married and is planning for a wedding next year.

Goff, though, enjoys one super skill that, sadly, separates him from millions of Americans: He’s saving for retirement.

“I have been able to max out my Roth IRA,” says Goff, 25, who is also putting nearly a fifth of his salary toward his 401(k), including a 4 percent employer match, in addition to the $5,500 annual contribution to his Roth.

How much money needed to retire?

While he doesn’t have a specific number he’s trying to reach — he is roughly four decades from retirement, after all — Goff does have a sense of where he wants to go, planning to amass a nest egg equal to 25 times his final annual expenses.

Most Americans, though, haven’t a clue. According to a Bankrate survey, 61 percent of Americans don’t know how much money they’ll need to save for retirement, including nearly three-fifths of every adult generation over age 37. 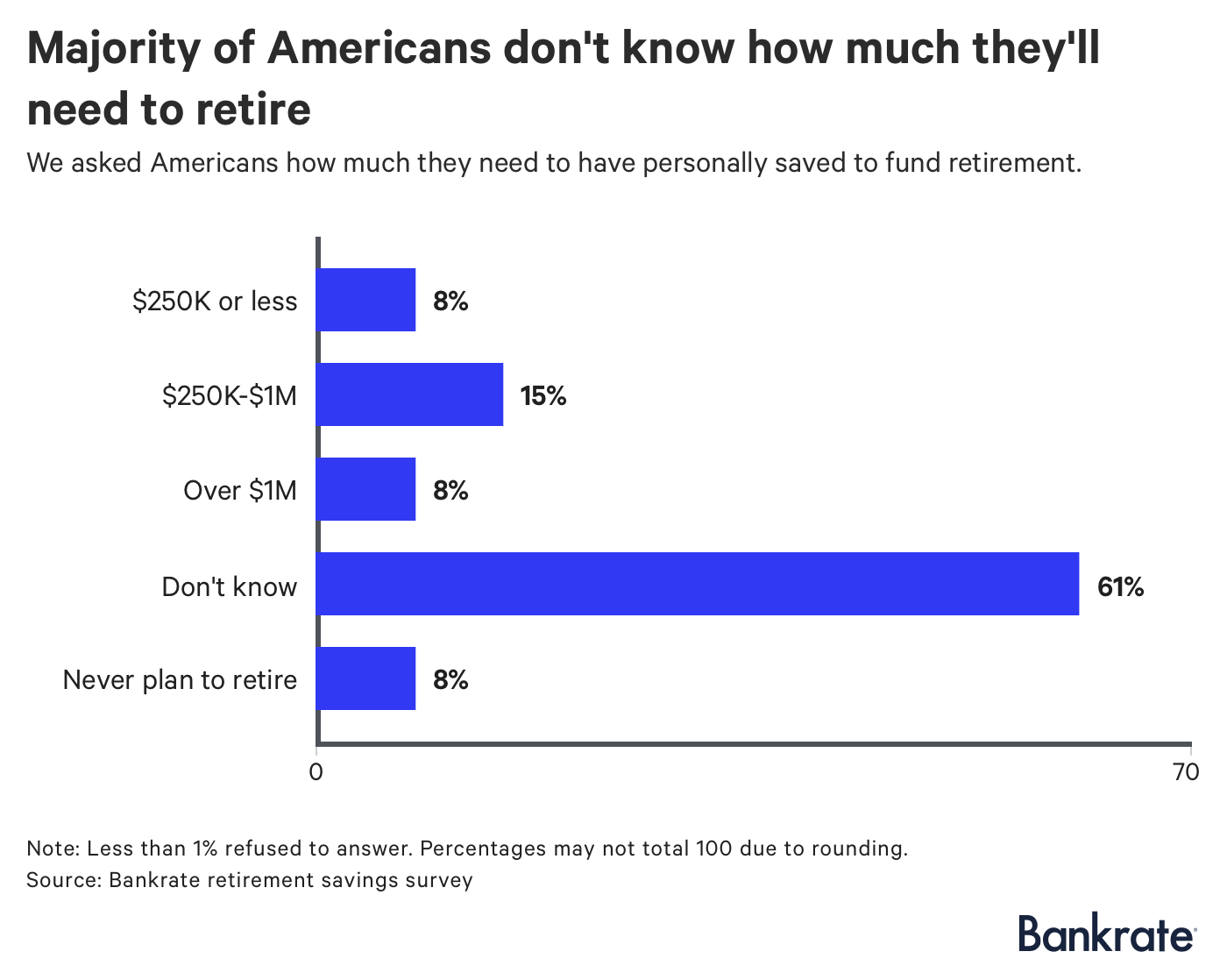 Those who have an estimate – an average of $650,000 in the Bankrate survey – likely misjudge what they’ll require for a secure retirement, while others bear unrealistic expectations on when they’ll stop working and what role Social Security will play in their lives.

Unsurprisingly, millennials – age 18 to 37 – are the least likely to have a retirement goal in mind, with 69 percent of respondents saying they didn’t know. However, knowledge doesn’t advance much with age.

Fifty-six percent of Gen-Xers, 58 percent of baby boomers and 59 percent of those age 73 and over (Silent Generation) claimed ignorance. Retirement for Americans is a confusing proposition.

Which is why so many people are so defeated by it.

Fewer than 2 in 5 non-retirees feel as if their retirement savings are on track, according to the most recent Federal Reserve Report on the Economic Well-Being of Households. Even among those non-retirees who are saving, three-fifths have little or no comfort managing their investments in products like a 401(k). 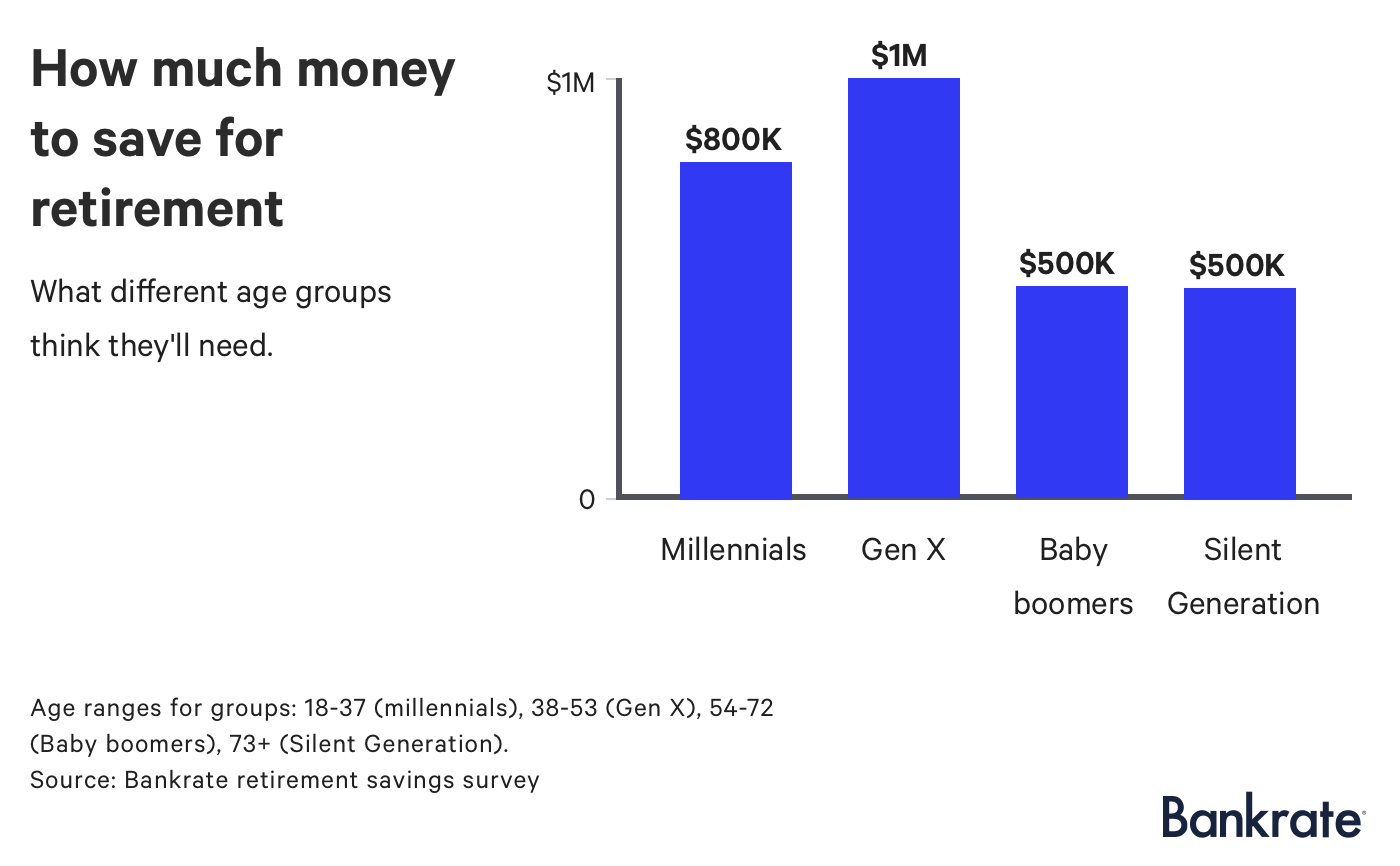 Alex Goff’s generation is the most adrift, with 41 percent of those between the ages of 18 and 29 owning no retirement savings, while just a quarter believe they’re on the right path.

While the vast majority of each generation doesn’t know what they’ll need, some did venture an estimate.

Where people turn for retirement advice

Part of the issue may be a lack of financial knowledge. In the Federal Reserve survey, adults on average answered fewer than 60 percent of five financial literacy questions correctly. The worse someone scored, the less confident they were looking after their retirement investments.

Americans have no one trusted avenue for financial advice to help them save for retirement. A quarter enlist a financial adviser, with older adults more likely to do so, while a fifth go to a family or friend. A tenth seek out online calculators, while the same percentage go to their bank. 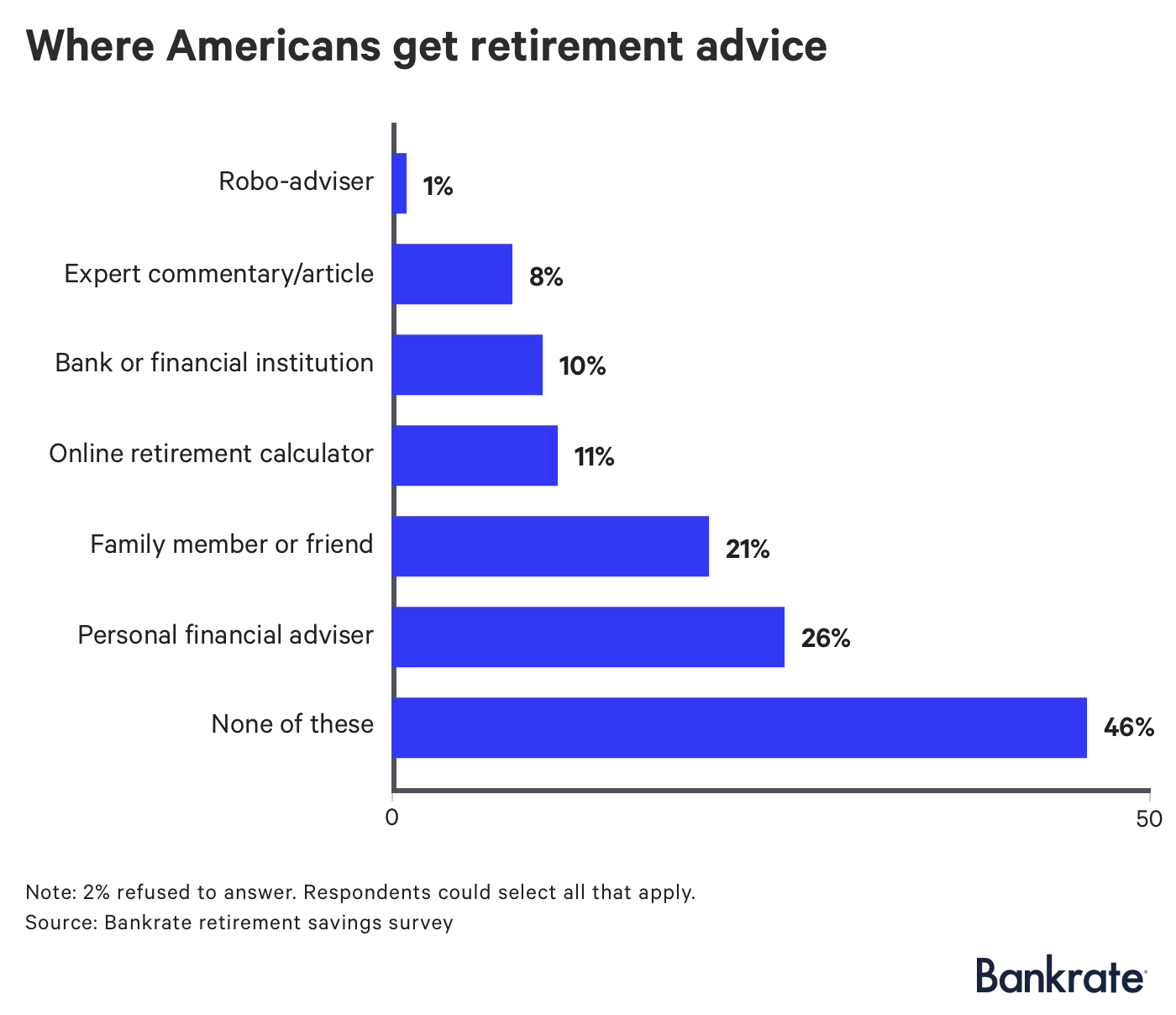 Almost of all respondents — 46 percent — don’t use any of the most popular vehicles for advice at all.

Which may explain the lack of optimism around Social Security.

One in 6 respondents in Bankrate’s survey said they would receive all or most of their retirement income from the pension program, while 46 percent said they’d receive only a little. Another 15 percent don’t expect to get a penny from Social Security.

This pessimism, however, is belied by reality. Even though Social Security’s trust fund is scheduled to evaporate by 2034, taxes would still fund about three-quarters of your benefits.

And that’s if nothing is done to help the program. And if nothing is done, that would hurt a lot of people. Why? If future retirees are anything like their parents, they’ll rely on Social Security a lot. Right now, half of retirees depend on their monthly check for half of their retirement income.

Since 41 percent of millennials have nothing saved for their golden years, according to the Federal Reserve, they’ll likely depend on Social Security. 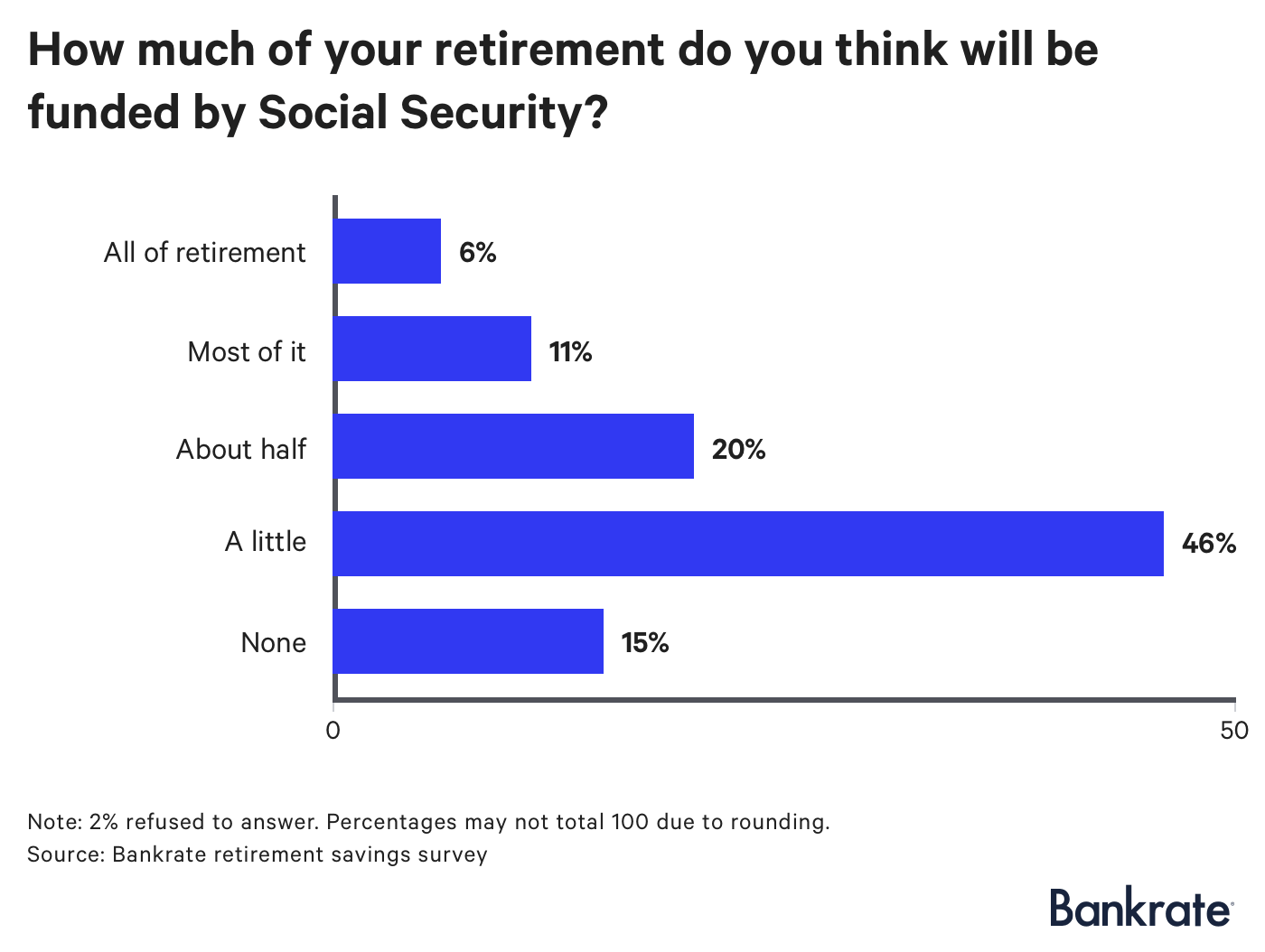 How to reach your retirement goals

The irony of today’s workplace is that you need to think about retirement as soon as you start working.

You just need to become a saver; make that be a part your identity. The goal is to save between 10 and 15 percent of your pay in a retirement account, including any employer match.

It helps to build toward a number, rather just for its own sake. Use this Bankrate retirement calculator to determine a reasonable goal.

“You have to factor in what your expenses are going to be and how long you expect to live,” says PNC Wealth Management’s Leanna Johannes.

All of those “if’s” and expectations, which don’t include projected investment returns, may make you queasy.

If so, consider hiring a fee-only Certified Financial Planner for more personalized help. Search for help through the Garrett Planning Network, which uses planners that put your interests first and don’t sell you stuff you don’t need.

This study was conducted for Bankrate by GfK Custom Research North America on its OmniWeb online omnibus. The sample consists of 1,000 completed interviews, weighted to ensure accurate and reliable representation of the total population, 18 years and older. Fieldwork was undertaken May 11-23 and 18-20, 2018. The margin of error for total respondents is +/- 3%.