6 best US cities for an airport layover 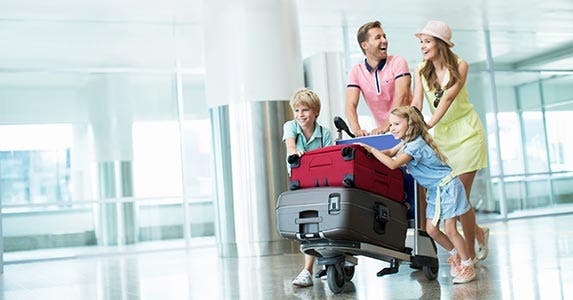 Hanging out at the airport

Gone are the days when waiting at the airport meant gnawing on dull fast food in a culinary wasteland and twiddling your thumbs in a stimulation-free zone. Today, you can go online, get a massage or haircut, admire art, hear live jazz, dine at famous local eateries, sip wine and hold a meeting.

“Airports everywhere are upgrading and upscaling their offerings in response to the fact that passengers are spending more time hanging around once they are past the security checkpoints,” says Harriet Baskas, author of “Stuck at the Airport” and USAToday.com’s “At the Airport” series.

As a result, it’s hard to keep up with the new services being offered at airports nowadays. “Many offer convenient services and amenities so busy executives can have better time management — like manicures, pedicures and haircuts — or lifestyle and stress-reduction services, from fitness, dropping off shoes for repair, even … pet-sitting or grooming,” says Bjorn Hanson, dean of New York University’s Preston Robert Tisch Center for Hospitality, Tourism, and Sports Management.

If you’re stuck at any of these airports, rejoice. Here are the best cities for an airport layover. 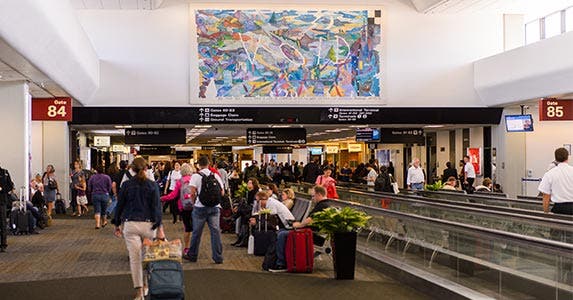 While many U.S. airports offer free, unlimited Wi-Fi, others don’t, except in business-class and first-class airline lounges. “For years, one of the top, if not the top, amenity on many road warriors’ wish lists has been free Wi-Fi at airports,” Baskas says.

Some of the amenities in which to partake on an airport layover here are a yoga studio, hair salon, medical clinic and an aquarium. Plus, a transit station provides speedy train access to San Francisco and Bay Area cities.

Restaurants are branches of local favorites, such as Ebisu, famed for creative sushi rolls, and The Buena Vista Cafe, where Irish coffee first came to the U.S. at the parent restaurant, and Yankee Pier, whose parent seafood restaurant has celebrity chef Bradley Ogden. 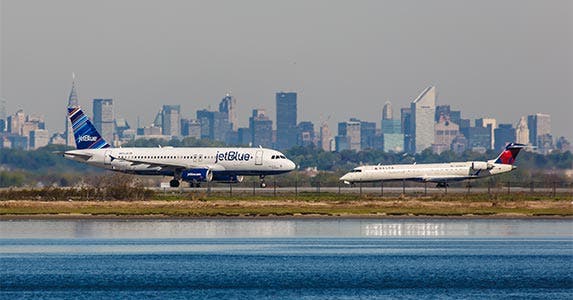 The Palm Bar & Grille, the airport branch of the New York steakhouse founded in 1926, is in terminal 4.

Free unlimited Wi-Fi is only in terminal 5. The rest of JFK offers paid Internet access through Boingo Wireless. Rates vary. At JFK, you pay $4.95 for one hour and $7.95 for 24 hours. Boingo’s $9.95-per-month plan is good for thousands of hot spots in North and South America, and is located in fast-food eateries, shopping malls, convention centers and stadiums. 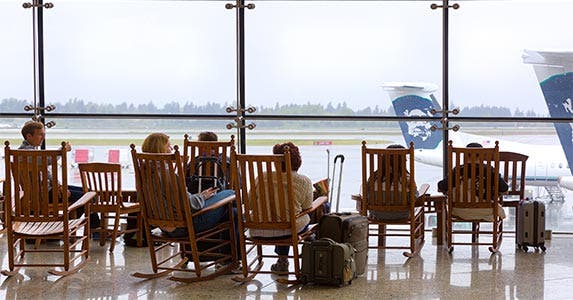 Free unlimited Wi-Fi, multiple charging stations, and a conference center with seven meeting rooms, whose biggest is 2,700 square feet, are found at Seattle-Tacoma International Airport, or Sea-Tac. The airport also belongs to a rewards program from which passengers earn airline miles and upgrades to first class by dining, shopping and parking at the airport and shops. Passengers join free by registering a credit card at the Thanks Again website, earning up to five miles/points per dollar spent. More than 170 U.S. airports and their merchants are in the program, which partners with frequent flier programs of American, Delta, United, Alaska and more.

“It’s a no-brainer to sign up because you know you’re going to be spending money at almost every airport you visit,” Baskas says.

For the discerning palate while on an airport layover, you can find yummy Pacific Northwest seafood at $14.95 and up, including fish tacos with wild Alaskan king salmon and Puget Sound oysters, at Anthony’s Restaurant in the central terminal. In the same terminal, chef Kathy Casey has a casual dining spot, Dish D’Lish, for hot sandwiches with chicken, brie and Washington apple chutney from $5.99 to $6.99. 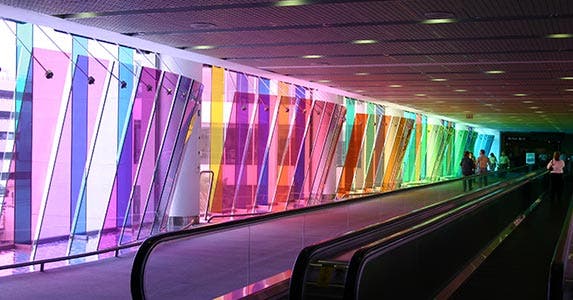 Miami International Airport won the best concessions program award in 2012 for a single terminal from Airport Revenue News for its north terminal, whose shops include Coach and Montblanc.

Among the top 10 airports for shopping worldwide on an airport layover, Miami was the only U.S. airport on the list compiled by CheapFlights.ca, which includes Dubai, London Heathrow and Amsterdam Schiphol.

“Miami is one of the most interesting airports, with Latin American flair, Cuban restaurants and fun places to hang out like Islander and Shula’s Bar & Grill for local fish,” says GetaRoom.com co-founder Bob Diener.

Miami is a gateway to Latin America, so no surprise that many passengers make a beeline for La Carreta restaurant, which offers a delicious signature sandwich — pork, ham, cheese and pickle on pressed bread — and other moderate-priced Latin specialties. The 24-hour cafe sells coffee and sandwiches at the airport.

Lorena Garcia Cocina, opened by the Venezuelan native chef who starred as a guest chef on Bravo TV’s “Top Chef Masters” and “Top Chef All-Stars,” serving shrimp ceviche and Caribbean jerk chicken, is also here. So are Icebox Cafe, a branch of the South Beach favorite, serving a manchego and prosciutto sandwich for $10, and Beaudevin, a classy wine bar that serves small plates.

Free Wi-Fi is limited to travel websites for the airport, airlines, hotels, rental cars and the Greater Miami Convention & Visitors Bureau. Otherwise, it costs $4.95 for the first 30 minutes or $7.95 for 24 hours. A business center, located between H and J concourses, offers paid computer access and photocopy, fax and printing services. Computers and printers in the Miami International Airport Hotel in the central terminal concourse E are also available. 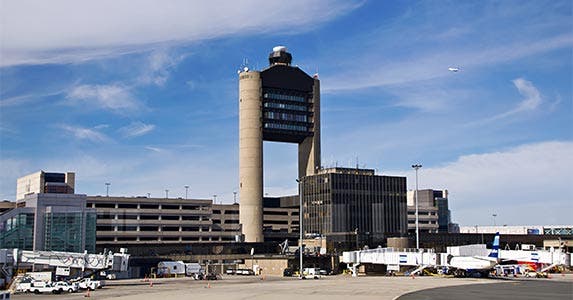 Airports that reflect the city’s local flavor are welcomed by travelers.

“I love Boston airport for its live lobsters to go from Legal Sea Foods, (also with its) authentic clam chowder, and brew pubs like Samuel Adams and Harpoon,” says Debbie Rizzo, founder of DRink PR in San Francisco. “I also enjoy the free Wi-Fi airport-wide, and if a flight is super-delayed, it’s just a quick $2 “T” ride to the north end, the Italian section, for cannolis and pizza.”

Legal Sea Foods, called Boston’s most popular restaurant by Zagat survey in 2012-2013, has four locations in the A, B and C terminals, where you can order steamed lobster, crab cakes, clam chowder or Portuguese fisherman’s stew with fish stewed with mussels, clams and chourico sausage in a saffron tomato broth. Wine bar Vino Volo and a branch of Boston-based celebrity chef Todd English’s Bonfire are also here.

Free unlimited Wi-Fi is airport-wide. In addition, Logan has two spas, including XpresSpa, featuring massages, manicures and pedicures in 15 minutes to an hour, and a hair and nail salon. One more thing to relax you: a free jump if your car battery dies in the parking lot. 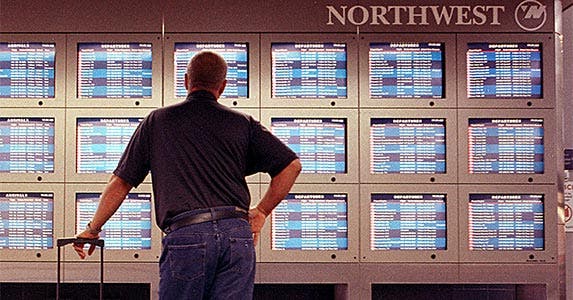 Minneapolis-St. Paul International Airport has a downloadable coupon book for discounts for clothing, food and beverages, spa services, and books from airport merchants during an airport layover. “The coupons, also given out at traveler assistance booths, give customers an incentive to explore the airport and enjoy a better travel experience,” says airport spokesman Patrick Hogan.

At Minneapolis’ airport, you’ll find three XpresSpas, a hair salon, a 1.4-mile indoor walking path, Digiboo for downloading more than 800 movies and TV shows onto a laptop or Android, and a conference center with meeting rooms and work stations for up to 100 people.

A pet hotel, offering boarding and grooming services, is near the airport and is open 24 hours a day. “Regardless of what time your plane gets in or leaves, you can park, drop off your animal at Now Boarding, and take their free shuttle to the airport,” Hogan says.