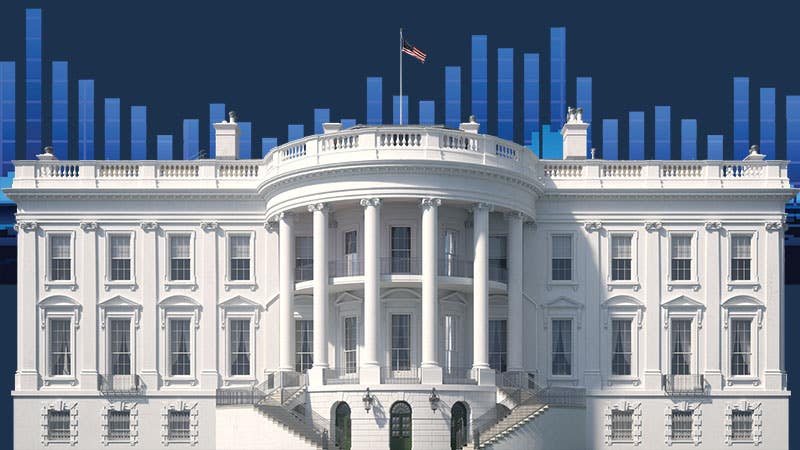 Images by Adobe/Illustration by Bankrate

It’s shaping up to be another strong year for stocks, but investors may want to brace for some market choppiness ahead.

That’s the takeaway from Bankrate’s latest Market Mavens survey, which asked 13 of the nation’s top financial experts where they see equities, stocks and the broader S&P 500 index a year from now. Experts were all in agreement that the year ahead will be filled with uncertainty and market-moving events — from the presidential elections and the ongoing U.S.-China trade negotiations, to monetary policy, as well as escalating conflicts in the Middle East.

“The news cycle drives investors to act,” says Kim Forrest, chief investment officer and founder of Bokeh Capital Partners. “And in a year with a lot of news, we expect investors to react.”

But the majority (or 85 percent) of market professionals still expect the S&P 500 to close higher than it is now, with the average forecast calling for a year-end target of 3,364. That estimate implies a 6.2 percent gain from where the index closed on Friday, Dec. 13, the day the survey period ended.

“In 2020, the biggest issue for most of the year is just the unknown,” says Matt Nadeau, CFA, wealth adviser at Piershale Financial Group. “Companies and investors may be taking a ‘wait-and-see’ approach before making investment decisions. With a wide range of potential policy outcomes, it is hard to know the long-term impact.” 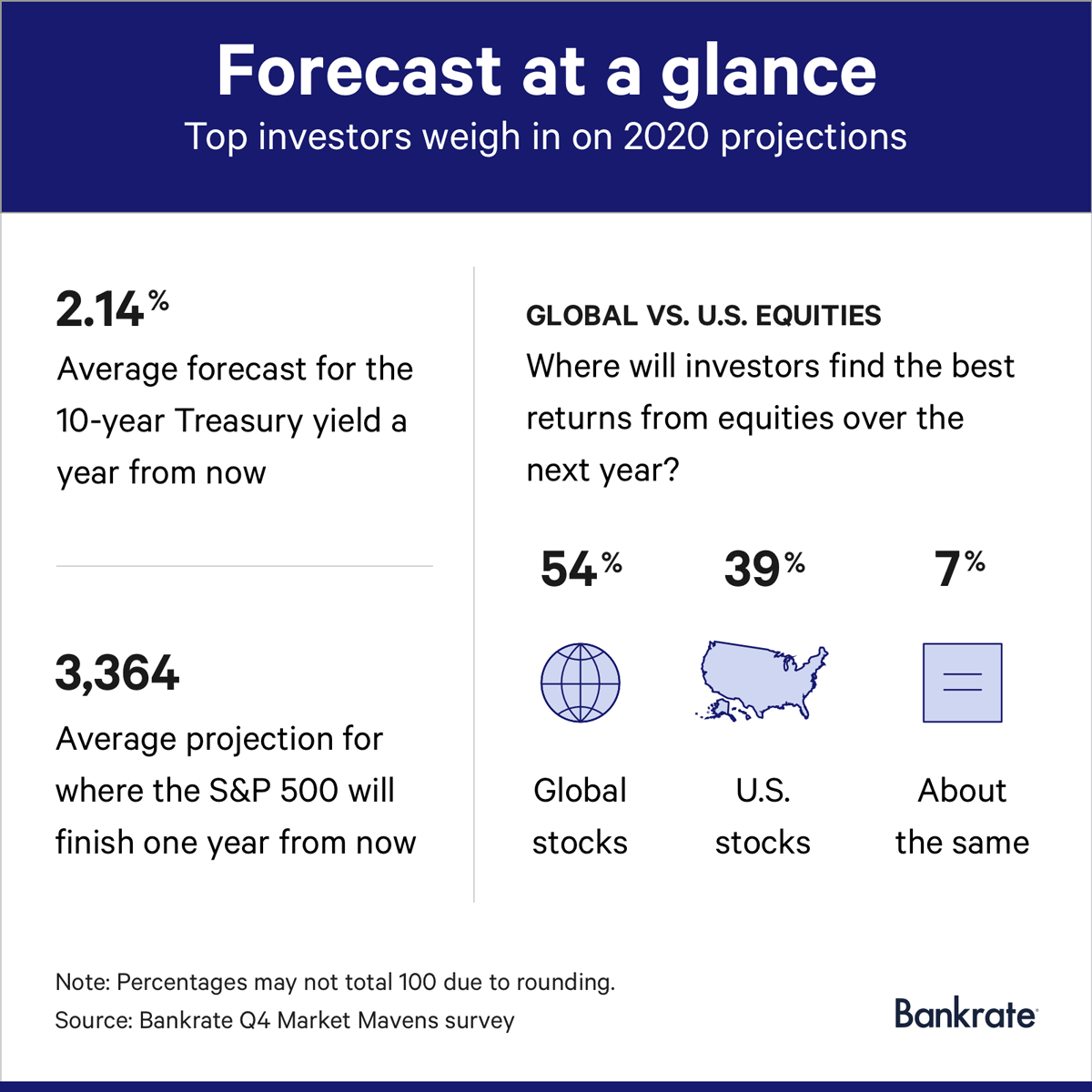 How will the 2020 presidential elections impact the markets?

While the presidential election is likely to turn some heads, most professionals (or 61 percent) expect it to have a moderate impact on the markets.

That’s mostly based on past experience. Since World War II, there have been 18 presidential elections. The S&P 500 has posted advances in 14 of those election years, rising by an average of 6.3 percent, according to Sam Stovall, chief investment strategist at CFRA Research. During the six elections that a first-term Republican has sought re-election, the market has risen 100 percent of the time, with an average gain of 6.6 percent, he says.

The Oval Office does have a hand in impacting many key sectors of the economy, from health care and technology to energy. But even if a new Democratic president is voted in, most experts aren’t expecting drastic change. Congress is likely to remain divided, meaning it’ll be tough to push for the type of policy changes big enough to affect the markets.

“The spectrum of policy outcomes in 2021 is probably not as wide as it currently appears based on candidate rhetoric,” says Brian Nick, chief investment strategist at Nuveen. “Even a truly progressive president and congressional majority would have difficulty passing a wealth tax or single-payer health care system with the various constraints and roadblocks built into the system.”

Meanwhile, 15 percent of experts foresee “much impact” from the elections this year, with 7 percent expecting “a little” impact and another 15 percent saying they see no impact at all.

“The most likely outcome is continued gridlock, which should mean major policy changes are unlikely and we remain at status quo,” says Brad McMillan, managing principal and chief investment officer at Commonwealth Financial Network.

Stock returns will likely be lower than normal, experts predict

Even with a bout of stimulus from the Federal Reserve in 2019, it’s going to be tough to keep the party going, most experts say. Sixty-nine percent expect returns to be lower than normal over the next five years, largely because prices are already so high.

“The starting point here really matters,” says Dan Eye, head of asset allocation and equity research at Roof Advisory Group. “With equity markets at all-time highs and valuations at the high end of the range over the last decade, investors should not expect a repeat of the previous 10 years. Historically, returns have been lower than average when valuations have been this high.”

About a third (or 31 percent) of investors expect returns from equities over the next five years to remain close to their historic norms. That’s largely because interest rates look like they’re going to be on hold this year, based on signals coming out of the Fed. At its last rate-setting meeting of the year, U.S. central bankers signaled wide agreement that they didn’t want to nudge rates higher or lower.

“Interest rates should not change, so the multiples paid shouldn’t change,” Forrest says. “This would be the biggest driver of equity valuations, so returns should hold steady.”

These expectations might be why investors say to look abroad for the best returns. Nearly 54 percent of experts favor investing in global equities, compared with 39 percent who say U.S. stocks will offer the best returns.

The S&P 500 rose by 29 percent in 2019, its best performance in six years. The index also barreled past 3,000 points for the first time in its history. But many experts caution that there’s likely not going to be much more room to grow.

“U.S. markets have been outperforming and have begun to either look fully priced or overpriced,” says Tom Lydon, CEO of ETF Trends. “International markets, after underperforming U.S. markets for many years, look undervalued and are in a position to catch up following the recent bout of global uncertainty in response to trade fears.”

Just 7 percent of respondents expect that returns will be about the same.

Despite how strong 2019 was for stocks, investors may want to look beyond growth stocks (or shares expected to increase in value rather than paying higher dividends), according to professionals. Just one market professional said growth stocks were the place to be.

About 62 percent of experts recommended that investors buy value stocks, or company shares priced below that of its industry peers that still have solid fundamentals.

But as stock prices have soared, the 10-year Treasury yield — which serves as a benchmark for the 30-year mortgage rate — has fallen off. That’ll likely continue over the next 12 months, according to the Market Mavens.

It’s safe to say that 2020 will offer a lot for investors to chew on. The hardest part for investors might be dealing with the high degree of uncertainty, experts said.

But it’s imperative that investors look past the day-to-day noise and focus on their long-term goals, says Mark Hamrick, Bankrate’s senior economic analyst. Though equities come with risk, their returns make them vital to your retirement savings.

“Investors need to look past any short-term noise to focus on longer-term financial goals, including retirement savings,” Hamrick says. “Most individual investors require exposure to the stock market, typically via mutual funds, for the superior return provided over the long-term in order to fund retirement savings.”

That’s going to be even more important for younger investors, who may still find themselves years away from retirement, Hamrick says.

Even so, the stock market withstood some trying times in 2019. The president was impeached, the Trump administration waged a hot-and-cold trade war with China, and the U.S. faced new geopolitical conflicts in the Middle East. It seems counterintuitive that stocks would go on to break so many records during a bumpy year.

“After the stock market essentially blew the roof off of expectations in 2019, it is logical for the outlook to be relatively subdued in 2020 and the years ahead,” Hamrick says. “While the news cycle remains volatile, the stock market has surprised to the upside.”