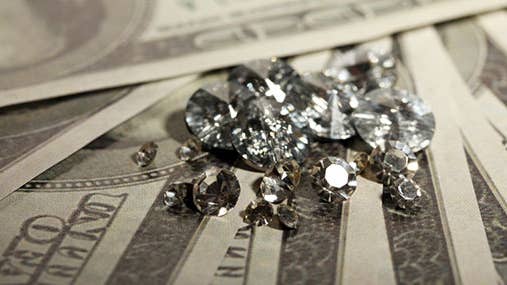 Diamonds, the gems that have symbolized love and marriage for decades, are beginning to attract wealthy investors as a commodity investment with potentially high returns.

Negligible yield on fixed-income investments and volatility in the equity markets are driving the search for a relatively stable investment that can pack some punch in returns. The wealthy have been turning to hard assets they can enjoy, including jewelry, art and even collectible cars. Investing in diamonds is a natural alternative.

Until recently, diamonds were off the radar screen as a pure investment for a variety of reasons, including lack of price transparency and a liquid trading market, as well as difficulty in establishing uniform standards of quality among stones.

“Each stone is very unique,” says Brent Fykes, senior investment partner at GenSpring, a multifamily office for individuals with at least $20 million to invest. For the most part, “An ounce of gold is an ounce of gold, but it’s not like that for diamonds.”

But with increasing global demand for the gem, companies are emerging with plans to replicate the success of gold and silver by developing diamond-backed exchange-traded funds or mutual funds.

Until the Securities and Exchange Commission approves such a fund or ETF, U.S. investors are largely limited to buying and selling physical gems, typically through a dealer. But whether considering a fund, ETF or physical ownership, “it’s a sucker’s bet” to get involved in the diamond trade unless you know what you’re doing, according to Martin Rapaport, chairman of Rapaport Group and the RapNet Diamond Index, a resource for diamond pricing.

The buzz around investing in diamonds has been fueled by news this spring of spectacular auction sales and rising prices for both rough and polished gems.

In April, Sotheby’s sold a 74.79-carat white diamond for $14.2 million in competitive bidding that took the price far above its presale estimate of $9 million to $12 million. In May, Christie’s sold a pear-shaped, 101.73-carat rock for $26.7 million.

With increasing global appetite for diamonds and a limited number of mining operations, supply and demand are working in the investor’s favor and driving up prices.

Another research firm, Wealth-X, reports that prices of rough diamonds have risen by nearly a third since 2005 and are likely to go up another 20 percent by 2017.

“Supply will probably increase 2 percent to 3 percent per year over the next decade, versus demand of about 7 percent per year,” Rapaport estimates. The overall view is that prices will go up because of buying in markets such as India and China, where new wealth is emerging, although demand in those countries has been waning with the softening economies, he adds.

The reality of buying and selling diamonds, however, is not dictated simply by the principles of supply and demand. It’s not like the average investor can go out and purchase a diamond and expect to sell it for a profit, says Edahn Golan, an analyst specializing in the diamond industry.”You have to have what’s called an ‘early hand,'” he says. “Every time a diamond changes hands among dealers, there’s a markup in price. If you buy from a polisher, it’s considered firsthand. Many collectors already know who is an early hand trader.”

Rapaport says there are four principles of diamond investing: price transparency, quality assurance, transaction costs and liquidity. Before buying and trading in gems, investors should understand how each of these affects their purchase.

Singapore Diamond Exchange, which sells diamonds at wholesale, offers one way to build a portfolio of diamonds and is similar to using a broker, says Golan. However, there are fees, and investors still need to understand what they’re buying.

In addition to a cache of knowledge, investors interested in diamonds will require a hefty sum of cash. Until there is a fund or ETF available, small investors won’t gain much from a physical investment in the gems, says Rapaport. “It’s not yet prime time for the small investor,” he says. “Our company deals with people who have $100,000 or more to invest.”

Because of the difficulty in pricing diamonds, ETFs and mutual funds based on the value of the gemstone have remained elusive. However, there are two prominent initiatives for ETFs, Golan says, from Index IQ and GemShares. Both companies have applications under review with the SEC.

The way the ETFs would work, Golan says, is the companies would buy and store physical diamonds, probably 1-carat, round white stones, since those held their value during the 2008 recession and are more readily traded. Shares would be issued to investors and an index created to track the changes in value within the wholesale market.

An ETF might be a good way to begin investing in diamonds as a commodity, Rapaport says, as long as prices can be reliably tracked and investors understand that diamonds have boom and bust cycles just like the equity market.

But Fykes says if clients express an interest in diamond ETFs, he would advise caution. “I think the funds will have a hard time getting confidence in pricing,” he says. Currently, the industry allows a certain amount of leeway in pricing among appraisers, which is a challenge, he adds, whereas prices of gold and silver are more established and straightforward.

Mutual funds, and even ETFs, can also fall victim to redemption issues, Fykes says, which sometimes force managers to sell at a loss in order to pay off investors. A similar scenario recently occurred with bond funds as investors fled on speculation of rising interest rates. And earlier this year, gold ETFs were facing redemption issues as prices fell. “If you have to sell diamonds back to the dealer, it’s kind of like selling a used car,” says Fykes. “You know you’ll take a haircut.”