The most generous billionaire 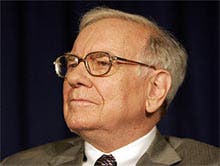 One billionaire far outpaced any others last year in his generosity to charity: Warren Buffett. The 82-year-old chairman and CEO of Berkshire Hathaway gave $3.09 billion, more than half the total amount given by the other 14 on the list of largest charitable donations, published by The Chronicle of Philanthropy.

Buffett is putting his money where his mouth is. In 2010 he announced that he was giving 90 percent of his fortune to charity and urged other rich Americans to donate at least half of their wealth. Since then, his Giving Pledge, as the campaign is called, has attracted dozens of billionaires, including media tycoon Ted Turner and Oracle Corp. co-founder Larry Ellison.

Buffett’s $3.09 billion gift last year was in the form of stock, to be divided equally among foundations run by his children. After Buffett, the largest donations in 2012 came from Facebook founder Mark Zuckerberg, whose $498.8 million gift to the Silicon Valley Community Foundation will support health and education. No. 3 is Paul Allen, co-founder of Microsoft, with a $300 million donation to the Allen Institute for Brain Science.