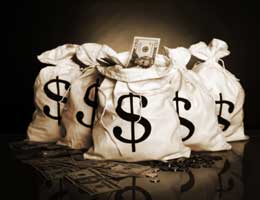 If you were to ask people what they would do with a windfall of $20 million, I bet none of them would say they’d spend it all, plus another $600,000, within eight years and then declare bankruptcy.

But one couple did just that. In 2004, a jury awarded a Missouri couple, Eric and Cassandra Peoples, a total of $20 million for lung injuries Eric suffered as part of his job at a flavor and fragrance maker. Now they’ve not only declared bankruptcy, but list more than $611,000 in liabilities, according to ABC’s “Good Morning America.” Their assets include a home worth $700,000 and personal property worth $33,000. The couple isn’t talking to media, so there’s no indication of where the rest of the money went.

Regardless of the circumstances, this is a version of the same tragic story for so many of the people who come into “found money” after they’ve hit the lottery jackpot, received an unexpected inheritance or won a court settlement. In the end, they would have been better off having never received the money because they end up deeper in debt.

“Way too often the first impulse is to spend” a windfall, says Leslie Corcoran, founder of Family First Financial Planning. Because the sudden wealth is unexpected, people often feel they deserve the opportunity to blow it, she adds. “Most people are used to spending what they bring in versus having a saving habit, so this is what they know how to do.”

When families that have not had money suddenly do, they are often unprepared for all the issues that come with handling wealth and it’s human nature to want things you can’t have, explains Andrew Mehalko, president of AM Global Wealth Management, a firm that manages money for the wealthy. “A good analogy would be to ask someone who has never trained for a marathon to go run one tomorrow,” he adds.

An amount as high as $20 million can seem like an unlimited bank account to those unaccustomed to having such a high net worth, so your first step toward preserving it for the long haul is to engage the services of a professional you can trust, who is not trying to sell you anything. Spending is not a sin, but you have to have the scope of what’s going toward taxes, debts and other expenses and take the time to develop a solid financial plan before you whip out the credit cards.

Corcoran advises parking the money in safe accounts until you can make informed decisions about investments. “You need time to adjust to this windfall and time to determine what you really want to do with it,” she adds.

The itch is too great for most people, so scratch it by blowing some money on that motorcycle you’ve always wanted or the vacation in the mountains; but keep it small. “I think people do need to plan for a portion to splurge,” says Corcoran. “Otherwise, the splurge will occur but will be of a much larger amount. Just like a diet, one needs to have some allowances for a little treat.”

One way to keep it small is to set a limit upfront. “Do NOT spend — on trips, houses, cars, boats, etc. — more than 2 percent of the after-tax proceeds of the award in the first year,” Mehalko advises. Instead, he adds, remember that you’re in this for the long term and “spend” the year training for the wealth marathon.

How would you handle a $20 million windfall?