Save by freezing leftover produce 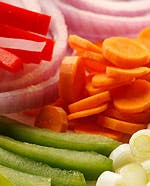 People living in suburban and urban areas can often learn a few lessons from those living in rural areas. Our Frugal $ense contest winner for April is Janet Ables of Ardmore, Tenn. This matriarch of a large Southern family suggests ways to save on produce, whether you buy from a grocery store or grow yours in a garden.

Janet Ables of Ardmore, Tenn., won $100 for submitting the following tip:
Chopping vegetables — and expenses
“To keep vegetables — such as bell pepper, onion or celery — from going to waste, just chop them and put in a Ziploc bag and freeze. The next time you need a tablespoon or two, you just break it off and use it. (It) saves time and money.”
Read more tipsSubmit your tip

Bankrate: Tell us a little about yourself.

Janet Ables: I have a large family, eight children, my triplets are 24 years old and I have 18 grandchildren, two on the way and one great grandchild. I have 13 to 35 (people) at my home on Sundays for lunch, after church. So I try to make things go as far as they need to. We live in the country, we’ve always lived in the country. Things that seem frugal to others just make common sense for us. It is a matter of the way we live.

Bankrate: Have you always had a garden?

Janet Ables: We usually have a produce garden. Of course we freeze our produce from the garden. Especially corn, I love frozen corn.

Bankrate: How do you freeze produce?

Janet Ables: You know if you get a bell pepper — a red one or a green one or a yellow one — and you use part of that in a recipe and you put the remainder in a Ziploc bag and put it in your crisper drawer, you wind up with some mush that you have to throw out in a few days. Just go ahead and chop the whole thing, put it in the freezer and then (the) next time you need your pepper in a recipe, you have it there and you just break off what you need. And it’s already done for you.

Bankrate: Are there any vegetables that you think freeze especially well?

Janet Ables: Red peppers especially, they’re very good in recipes, but they’re also very expensive and you don’t want to end up throwing half of it away.

Bankrate: Any other tips from your lifetime of experience?

Janet Ables: Two things: I am a Pampered Chef consultant so I ‘m always looking for quick tips for things I can use at my shows — like bell peppers if you want to use them in your salad and don’t want to freeze it for use later. If you’ll chop up what you need and leave the seed pod in, it will last twice as long as if you clean it and take all of the seed pod out. (The) second concerns leftovers. Vegetables and such go into one bowl and you put them in the refrigerator and you can make stew or soups and you can use it the next day. Most of the time people don’t like leftovers, but if you reinvent the leftovers, they’ll eat it. Don’t call them leftovers, name them something else.