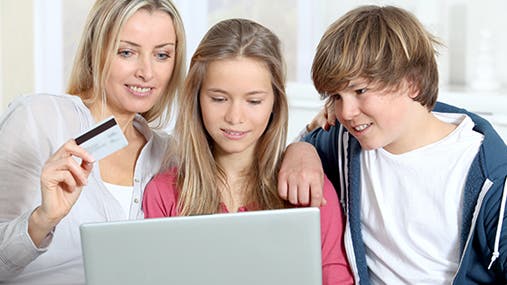 Teens can be easy targets for fraudsters.

Scammers seek out teens because teens have clean records and no established credit reports. Teens are also avid social network and Internet users, where personal data are more readily available.

The result is that teens make up 6 percent of identity theft cases reported every year, according to the Federal Trade Commission.

ID theft happens when a fraudster uses your personal information — such as a Social Security, credit card or bank account number — to purchase goods and services.

Unfortunately, teens usually don’t find out about ID theft scams until they apply for a driver’s license or get a credit card. By then, the damage is already done, says Robert Siciliano, a Boston-based personal security expert. Identity thieves may have already racked up thousands in debt under the teen’s name.

Later, teens may have difficulty getting a student loan, credit cards and even jobs, because employers are now checking credit reports of prospective employees, he says.

Siciliano says that’s why explaining the risks and pitfalls of a digital lifestyle is very important. That means their best defense is probably you — their parent. Here are some ways to help protect your teen from ID theft.

In countering that, Adam Levin, chairman of ID theft solutions site IDT911.com, says parents should stress that teens should exercise control over these assets, since their management can lead to financial gain, and lack of control can lead to financial pain. Your financial identity, created throughout your life as you save, spend and invest, can be seriously damaged by ID theft.

An identity thief can steal your Social Security number and use it to get a credit card, racking up charges, ruining your credit score and increasing your borrowing costs, if you even can borrow money after your credit is ruined.

Tell your child: Every dollar paid for having a low credit score is one you could have invested instead, Levin says. “It’s important to play a parental role because teens aren’t so concerned about providing information,” he says.

Begin by educating teens on digital behavior because they spend money online or take online quizzes, making them more susceptible to fraud, Levin says. Tell your teen to look for secure sites signified by a golden lock or only go to big sites such as Amazon or eBay. The golden lock signifies a high level of security in which your data are encrypted, so others can’t read it.

Also, warn teens about taking online quizzes or surveys promising free stuff, Levin says. Their purpose is to find out personal information, such as a teen’s favorite color or mother’s maiden name, so fraudsters can answer security questions that unlock their identity. “Some of them are actually sponsored by the bad guys,” he says.

Online gaming communities that use the Xbox and PlayStation game systems also can be dangerous for teens. You can play with people all over the world, and scammers may use fake identities in these communities to get personal information such as an account password or email address. Teens should be warned not to give out personal information online while playing these video games.

You can use a teen checking account as a teaching point. Helping your child open a checking account is a great starting point for educating them, Lewis says. “Show them how to protect data like account numbers and checking balances on a daily basis,” he says.

Check their Facebook page. As enthusiastic social networkers, teens unwittingly may share vital information, such as their birthday, address or phone number, on Facebook and other social media venues. Those are some of the same details used to verify your identity on financial documents.

They should look for account charges by unknown entities. “You want to know how they’re spending their money anyway and to make sure that no one else is using their accounts,” Lewis says.

Ratchet up security. Teens don’t always use proper password security on computers or smartphones, either forgoing security measures entirely or coming up with dumb, easy-to-uncover passwords for computers and laptops, Levin says. Or they leave their smartphones lying around.

And it’s not just the teens who are at risk. “Parents can be significantly damaged if their home computer is breached and tax information is on it,” IDT911.com’s Levin says.

One solution is to put parental blocks on computers used by teens, says Xavier Epps, a financial adviser for XNE Financial Advising LLC in Woodbridge, Va. Parental blocks are online tools that limit computer use, blocking specific websites. LifeLock Inc., of Tempe, Ariz., monitors a person’s identity for a monthly or yearly fee, but it can be set up to cover the family, too, he says.

Lewis advises to help your child download password-protection apps so no one can steal financial data, and to instruct teens not to give out their passwords to anyone. “Teens are notorious for sharing their online passwords,” he says.

Using preventive measures now is worth it to avoid financial pain later.