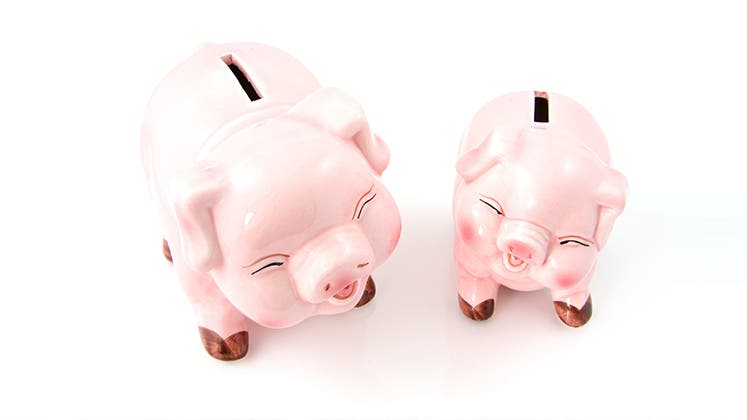 Piggy banks may seem like child’s play, but these timeless coin containers appeal to people of all ages. As many piggy banks have become collectors’ items, they can be great for starting an investment-worthy collection.

“It’s kind of like getting engaged. It’s an emotional thing; it’ll talk to you,” says Terry Kovel of Kovels.com and an author on antiques and collectibles. “If nothing talks to you, don’t collect piggy banks.”

If one does talk to you, take the emotion out with these five tips when deciding whether to invest in a piggy bank.

Do your research before buying. Don’t know much about banks? James Massey, publisher of WhatSellsBest.com, a website that monitors auction items worldwide, recommends searching auction houses online and sorting the results by highest price first. This will help you become familiar with the best-selling banks and manufacturers, and which ones will get you the most bang for your buck as an investment.

You’ll also want to decide what kind of banks you’re interested in. Piggy banks come in all sizes and are made of a variety of materials. There are also mechanical piggy banks, which feature motion that accompanies or follows the coin being deposited.

Books such as “Kovels’ Antiques & Collectibles Price Guide 2014” can be a great resource for buying and selling piggy banks as an investment, as can joining an organization like the Still Bank Collectors Club of America, which holds an annual convention that includes members-only buying and selling of banks.

Those interested in mechanical banks may want to look into the Mechanical Bank Collectors of America. To learn what appraisers look for in mechanical banks, Massey suggests visiting the “Antiques Roadshow” website to watch videos of banks being valued.

If you’re after typical “still” piggy banks, know that cast-iron banks made from the 1870s to the early 1930s are considered the most valuable from an investing standpoint.

“Early banks were made by some hardware foundries, some of which were out of business by the turn of the century,” says Doug Riat, president of the Still Bank Collectors Club. “Some later cast-iron banks were made by a few foundries that tried to diversify to stay in business by making banks or toys during the Depression, but by the mid-1930s, cast-iron still-bank production ended.”

Any banks produced after that time period are referred to as “modern” or “reproduction” piggy banks.

Determine your budget. Like most pursuits, the more effort you put into bank collecting, the more you’ll get out of it. “With any kind of collecting, my advice is to buy the best you can afford,” Kovel says. “In the long run, when you go to sell it, the more expensive it is, the better return you’ll get on your money.”

If you don’t have a ton to spend, though, don’t worry. Time is often on your side if you’re collecting for investment purposes — as long as you have the patience to wait it out.

Know where to look. Decades ago, collectible banks were relatively easy to acquire. Today, the task is tougher.

“Still banks are out there to be found, but not in the quantities they once were, as many are now already in collections,” Riat says. That doesn’t mean there aren’t some great finds to be had, maybe even in your grandparents’ basement.

Sites like Craigslist and eBay also can be a good source, but Massey cautions that you have to know what you’re looking for.

In addition, Riat says to “be very careful about reproductions, repairs and repaints.” These are not as good of an investment.

Keep your banks safely stored. Part of the joy of collecting, even if you plan to sell, is being able to display your wares. You don’t have to lock a bank away and never see it. Just make sure you keep your banks out of direct sunlight and in a spot where they’re not prone to toppling over so that you don’t erase any of their value.

“They like exactly what you like — not too hot, not too cold, not too wet, not too dry,” Kovel says.

Don’t try to clean or repair a bank on your own. “One of the biggest mistakes people make with collectibles is cleaning them,” Massey says. “Let’s say somebody goes out and buys a bank and it’s pretty dirty, but it’s also worth a considerable amount of money. You’re always better off with a professional as far as cleaning the bank.”

Why? “Collectors really want things in their original condition,” says Massey, who adds that wiping off the patina, a thin and usually green layer that forms naturally on copper and bronze objects when they’re exposed to air for a long time, could wipe away 80 percent to 90 percent of the value.

Riat says that in the past, collectors paid a premium price for rare banks. But now, the bank’s condition is the key factor in value.

“If you can find a specimen with 98 percent of the original finish, commonly referred to as ‘near mint’ condition, the same bank can have a value of $400 to $500. That said, cracks and breaks reduce value, and repairs and repaints even further reduce the value of the bank, often more in line or below the relative value at 50 percent of original condition,” Riat says.

Says Kovel: “If … you want to paint it green, just remember no one else is going to want it.”

Haley is a Seattle-based freelance writer who covers personal finance, retail, travel, health and a variety of other topics for print and online publications across the country. Her credits include "Cent$" (American Airlines Credit Union), "American Profile," "Every Day With Rachael Ray," "Four Seasons Magazine" and Match.com. She began writing for Bankrate.com in 2011. Haley graduated from the University of Pennsylvania with a degree in communication. To learn more about her work, visit HaleyShapley.com.