Folks out West set high standards for themselves, and young adults are — surprise! — more willing to enjoy life now and pay later, according to the results of a poll of Americans commissioned by Bankrate.com.

Are budgets important?
Almost nine in 10 respondents say it’s essential or very important to have a monthly budget.

And women say they’re better at sticking to budgets.

Bankrate commissioned a random survey in which 1,014 adults were asked their attitudes about budgeting and spending. Among the highlights:

Asked, “When it comes to achieving financial goals, how important do you think it is to create and live within a monthly budget,” Northeasterners were least likely to say that budgeting is essential or very important. Eighty-two percent of Northeasterners believe budgeting is that important, compared to 94 percent of Westerners, 90 percent of Southerners and 91 percent of the people in the north-central part of the country.

This national random-digit-dialed phone study of 1,014 adults 18 or older was conducted for Bankrate by GfK Roper Public Affairs & Media. The surveys were conducted from Dec. 26 through Dec. 30, 2006. The sample was weighted by demographic factors including age, gender, race, education and census region to ensure reliable and accurate representation of adults in U.S. households. Results based on the entire sample of 1,014 adults are projectable to the entire adult population in the United States, with a sampling error of plus or minus 3 percentage points. Results based on subgroups have a larger sampling error.

Are men and women so different?
The sexes agree that budgeting is important for achieving financial goals. 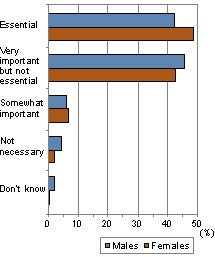 Although Westerners are convinced of the importance of budgeting, just 66 percent say they do an excellent or good job at sticking to their budgets, while the rest of the country stands at 77 percent. Either Westerners are worse at living within a budget, or they grade themselves more harshly. 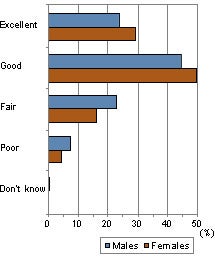 Among those who say they have worked out a monthly budget, women are more likely to say they are successful at sticking to it. Eighty percent of women say they do an excellent or good job at living within their household budget, compared to 69 percent of men who responded that way.

Lower-income Americans are less likely to say they stick to their budgets. Of people making less than $25,000 a year, 60 percent say they do an excellent or good job at living within the budget they have prepared, compared to 78 percent of those making $25,000 or more.

It makes sense that it’s harder to stick to a small budget than a big one, especially when unexpected expenses come into the picture. The poll results reflect that sentiment: Of the people who say they do a fair or poor job at living within their budget, more than half (54 percent) blame unexpected expenses. Only one-third (36 percent) of those who say they do an excellent or good job feel the same way.

Who follows a budget?
Of the people who say they budget, three-quarters say they do an excellent or good job of sticking to it.

The result of one question begs for a follow-up study. Respondents were asked if they agree with this statement: “Budgets are only for people who don’t have very much money.” There was agreement from about one-quarter (24 percent) of those who don’t have very much money — people who earn less than $25,000 a year. But among people making between $50,000 and $75,000, only about 6 percent agreed with that statement. Do low-earners believe they wouldn’t need a budget if they doubled or quadrupled their income? Are middle-income people disillusioned?

Finally, respondents were asked if they agree with this statement: “Life is too short to deny yourself pleasures just because you don’t have money right away.” There’s a double negative in that sentence (deny — don’t have), making it a bit hard to follow when people disagree.

Living without a budget
Seventy percent of those who don’t budget say they do an excellent or good job of living within their means.

So interpret the statement this way: “It’s OK to buy non-necessities on credit.” Do respondents agree or disagree?

Thirty-nine percent of Americans agree that it’s OK to buy non-necessities on credit, while 61 percent say it’s not OK. That seems rather hard to believe, given the popularity of credit cards, six-year auto loans and home equity lines of credit. Almost half (47 percent) of those age 18 to 34 think it’s acceptable to buy now and pay later, while only 32 percent of those 35 and older agree.

Ah, to be carefree and young! Or, as Shakespeare wrote: “A man loves the meat in his youth that he cannot endure in his age.”

What’s your experience with budgeting? Are you struggling? Successful? Share your story.

« Back to the Table of Contents