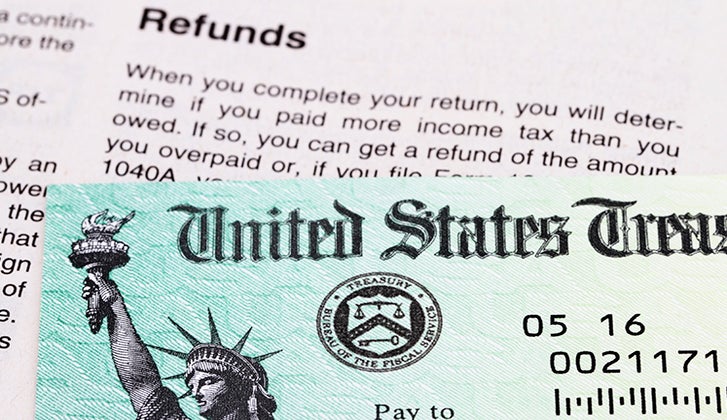 Americans may hate the annual tax-filing season, but they certainly welcome the refunds that are issued each year.

In fact, more than half of those who participated in Bankrate’s March Money Pulse survey say that they expect to get or have already received their IRS tax refund from the Treasury Department.

That’s not surprising. The IRS reports that most taxpayers do get money back each year when they file their returns.

What is surprising is that this phenomenon continues, despite the best efforts of tax and financial advisers to teach the public more efficient money management skills.

Many interest-free loans to Uncle Sam

Money managers regularly counsel taxpayers against having too much income tax withheld from paychecks. While this will produce a refund upon filing, it means that taxpayers surrender use of their own money for months.

The worker essentially provides the federal government a 12-month (or longer) interest-free loan.

“Most people think getting money back is a good thing, a windfall, but you’re simply getting your own money back,” says CFP professional Douglas Boneparth, vice president at Life and Wealth Planning in New York City.

The average refund amount so far this year is around $3,000. “That’s $250 a month you could have used throughout the year for saving or spending,” says Boneparth.

Refunds preferred across all income levels

The desire for a refund is strong at all income levels. More than half of respondents in the Bankrate Money Pulse poll say they prefer tax refunds to breaking even at filing time or owing Uncle Sam a bit.

And nearly 4 in 10 (38 percent) of all Americans say they would like a big IRS tax refund.

Only 27 percent of Americans say they want to hit that tax sweet spot of not getting a refund, but not owing Uncle Sam any money when they file their 1040 forms.

Laurie Ziegler, an enrolled agent with Sass Accounting in Saukville, Wisconsin, is not surprised about the refund preference.

“I do encounter it a lot,” says Ziegler, who is working her 23rd filing season as a tax preparer. In fact, one of Ziegler’s clients is getting a five-figure refund because the filer doesn’t want to owe the IRS.

When it comes to taxes, says Ziegler, people typically want to err on the side of caution.

Many taxpayers also use their annual refunds as forced savings accounts.

That’s somewhat understandable, considering interest rates on most liquid savings instruments are so low. But you also limit your access. “You can’t go to (the) IRS to get money to replace the furnace,” says Ziegler.

Still, many taxpayers apparently are comfortable with leaving their money in Uncle Sam’s hands. “We’re creatures of habit,” says Ziegler. “If it’s not broke, don’t fix it. But it is broke.”

“Is (forced savings) a good excuse? No, it is not. There’s no excuse for improper planning,” says Boneparth. “From a financial perspective, the reality is that it’s an inefficient, inferior way to save.”

What is surprising and a bit more encouraging from a financial standpoint is that more than a third (34 percent) of tax refund recipients plan to use the money to pay down debt.

Another 33 percent plan to save or invest the tax cash. About a quarter of poll respondents say they will spend their refunds on necessities, such as groceries or utility bills.

*Based on respondents who expect to or have already received refunds.

Retailers will be dismayed to learn that only 3 percent of taxpayers plan to splurge with their tax refunds.

Overall, taxpayers this year are a bit more conservative with their refunds than they were when surveyed five years ago.

“People are still very, very nervous about the future,” says Tim Gagnon, a tax attorney and accounting faculty member at Northeastern University in Boston. “They had to take on more debt and see a refund as an opportunity to get some of it down so they won’t be so leveraged.”

That’s a laudable goal. Still, Gagnon would like to see taxpayers get their money throughout the year.

Those who wait for an annual lump-sum refund not only waste use of their money while interest charges on debt grow, Gagnon says, but they also run the risk of not getting the money when they expect or need it if they encounter tax return processing delays.

All taxes are local

When asked what programs they would be most willing to pay higher taxes for, Americans narrowly favored higher education. Not surprisingly, the free tuition option was particularly popular among 18- to 29-year-olds, chosen by 43 percent in that age group.

Browning says there actually is some planning behind getting a refund. The problem is that many taxpayers don’t go beyond that.

“There generally is too little understanding of the trade-offs between getting a tax refund or not,” says Browning. “What you plan to do with a refund is what you could have done anyway with your money earlier.”

And, says Browning, many people don’t realize that tax planning is not just fancy financial maneuvering. Something as simple as filing a new W-4 to adjust withholding is tax planning. It’s a way to be more proactive in how to receive your money, says Browning.

Still, the receipt of a large refund that’s used for generally sound financial purposes could be viewed as the optimal suboptimal situation, says the Texas Tech professor.

“The optimal thing would be for people to have a zero tax refund and zero tax liability, to plan it right to maximize their money for optimal consumption over a set period, such as a tax year,” Browning says. “But if saving through a tax refund leads to people having money to set aside for saving, paying down or paying off debt, it’s not the optimal, but it could be the suboptimal solution.”

Who’s afraid of the stock market? And how often do Americans check their bank and retirement accounts online? For the answers to these questions, be sure to return for Bankrate’s savings and investing Money Pulse on April 9.

Methodology: Bankrate’s poll was conducted by Princeton Survey Research Associates International, which obtained the data via telephone interviews with a nationally representative sample of 1,003 adults living in the continental U.S. Telephone interviews were conducted by landline (502) and cellphone (501, including 276 without a landline phone) in English and Spanish from Feb. 26 to March 1, 2015. Statistical results are weighted to correct known demographic discrepancies. The margin of sampling error is plus or minus 3.7 percentage points.