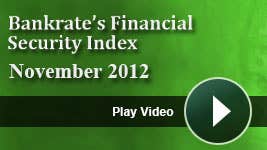 Forget saving money or paying down debt. The top financial priority for many Americans is simply staying afloat, according to Bankrate’s November Financial Security Index. Nearly a third of Americans, 32 percent, say that just staying current or getting caught up on bills is their main concern right now.

That could be good news if you think about it, according to Gail Cunningham, vice president of membership and public relations of the National Foundation for Credit Counseling.

When times are tough, just staying in place can be a victory. “This is a wise decision, both practically and financially. Falling behind on payments can easily snowball out of control, making a bad financial situation worse,” she says.

For nearly a quarter of the nation, or 23 percent, paying down debt is the most pressing priority.

“This is great news. Even if they are having trouble, they are thinking of paying down their debt,” says Sugato Chakravarty, Ph.D., professor and head of the department of consumer sciences and retailing at Purdue University. “It is to me an encouraging sign that people are taking their financial obligation quite seriously. And maybe even not doing other things in favor of paying down their debt.”

While living paycheck to paycheck and paying off debt are the focus of the majority of Americans, 20 percent of Bankrate’s survey respondents say that saving is their most immediate concern. Young people are most likely to pick savings as their top financial priority. One-quarter of 18- to 29-year-olds say saving is their main focus, compared to only 9 percent of Americans older than 65. The older cohort was much more likely to say keeping up with bills was their priority at 36 percent, compared to 26 percent of the youngest age group.

Here’s the good news: Young people may be more financially literate than previous generations as a result of the push to educate them on personal finance issues before setting them free in the real world.

Chakravarty teaches a budgeting class at Purdue and has seen a change in the students over the 15 years it’s been taught.

“If I had to make a generational statement, my sense just from the data I have is that younger people, thanks to these types of classes, are much more cognizant (of personal finance issues) than the slightly older population that may not have been as thoroughly drilled while they were in college,” he says.

On the bad news front, 50 percent of survey respondents who say they are just making ends meet are not employed, and 22 percent are retired.

For the retired set, ultralow interest rates on savings may be pushing senior citizens into survival mode. With less interest income from savings and fixed-income investments, people who are living off savings have seen their income fall dramatically.

At the same time, there simply aren’t enough jobs. Between high unemployment and stagnant wages, the sense that it is hard to get ahead these days is unshakeable. For example, in October, 2.4 million Americans were marginally attached to the workforce, meaning they were unemployed but haven’t looked for work in the four weeks preceding the survey. Of the marginally attached workers, 813,000 were classified as discouraged, which means they have all but given up on finding a job. Meanwhile, 8.3 million people remain underemployed, according to the Bureau of Labor Statistics employment report for October.

In addition, incomes are not keeping up with increases in the cost of living. Growth in hourly earnings has clocked in under the historical average inflation rate of 3.23 percent, according to a parsing of Bureau of Labor Statistics data from the Economic Policy Institute, or EPI.

“You can’t taste it or smell it or touch it, but it’s something that we all feel — and that’s inflation. You go to the grocery store and see things are more expensive than they used to be,” says Chris Zeches, Certified Financial Planner professional and vice president at Zeches Financial Services in Phoenix.

When wage increases fail to keep up with the rate of inflation, “people don’t have the money to go out and keep up with everyday items,” he says.

When the going gets tough, it’s time to budget. If just keeping your head above water is soaking up an entire paycheck, it may be time for an emergency intervention. “If a person is struggling to meet living expenses, it is usually a sign that their financial situation is in need of immediate attention,” Cunningham says.

“Paying living expenses first — rent or mortgage, utilities, groceries and gasoline — provides stability at home. If there is a vehicle payment, it should be next in line,” she says.

Finally, unsecured creditors, such as credit card companies, should be paid last. Avoiding late fees is important, in addition to preserving a decent credit score. But nothing comes before keeping a roof over your head. Unfortunately, even years into the economic recovery that’s still a real concern for many.