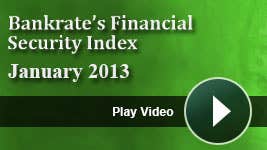 Were you naughty or nice over the holidays? Nice — that is, to your pocketbook. Most people say they landed squarely on the nice list, with 82 percent of Americans reporting that their holiday spending came in at or under expectations. On the naughty side, 16 percent of consumers say they spent more than expected, according to Bankrate’s January 2013 Financial Security Index.

The 2012 holiday season was consistent with the two previous years. In January 2011, 19 percent of Americans said they had overspent during the holidays, and a year later, 17 percent said they spent more than expected for the holidays.

Saving or spending less than expected was also in line with previous years, with 28 percent coming in under budget this year, compared to last year’s 24 percent and 27 percent in 2011.

Though consumers’ estimated budgets may have been in line with previous years, the forecast for the holiday sales season shows a slight dip from 2011, according to Chris Christopher, a senior principal economist and director of U.S. and global consumer markets with IHS Global Insight, a global market information and analytics company.

“We suspect holiday sales should be in the neighborhood of approximately 3.9 percent higher than last year,” Christopher says. “For the past two years, they were around 5.5 percent higher.”

The final official figures won’t be known until later this month.

There were myriad drains on spending enthusiasm in 2012, including the generally sluggish economy and consumer confidence going over the proverbial cliff at the end of the year.

“Our analysis is that the run-up to Christmas was not very strong,” Christopher says.

In late October, Superstorm Sandy disrupted luxury shopping in New York City, and then “after the election, the ‘fiscal cliff’ became paramount to the American household, and then consumer confidence fell dramatically,” he says.

In Bankrate’s survey, the youngest cohort was most likely to overspend, with 30 percent of those younger than 30 going over budget while just 12 percent of older consumers did.

The group most likely to report that their spending fell in line with expectations was the oldest group surveyed.

“It appears to support the ‘older and wiser’ adage, as the highest number of respondents who spent what they projected, 67 percent, came from those age 65 and older,” says Gail Cunningham, vice president of membership and public relations for the National Foundation for Credit Counseling.

Somewhat surprisingly, parents were no more likely than nonparents to say they overspent, at 17 percent and 15 percent respectively.

Most stuck to a budget

The major news is that most people had a budget and stuck to it.

“It is encouraging to see that more than half of respondents spent an amount close to what they anticipated during the holidays. This suggests that they had a budget and controlled spending, thus shouldn’t have any unpleasant surprises in the mailbox once the bills start arriving,” says Cunningham.

If you’re among the few who admit going overboard on holiday spending, there are a few ways to counteract the craziness. First, stop spending.

“When you go on a diet and find yourself falling off the wagon, one of the natural human tendencies is to go hog-wild, and not just eat two Oreos but to eat the whole package,” says Ellie Kay, author of “The 60-Minute Money Workout.”

“When it happens with finances, people just think, ‘Well I already overspent, I might as well continue to overspend,'” she says.

In order to pay off the debt, regroup and adjust your budget. Kay recommends taking a page from successful dieting strategies and using the buddy system to get you back on the wagon.

“One of the most successful programs is Weight Watchers — one of the biggest reasons they are successful is the accountability. There is something about it that just works,” she says.

Of course, simply stopping the bleeding is only one part of the process. Repairing the damage involves redrafting a budget with fewer discretionary expenses, such as eating out. It could even involve cutting down fixed expenses such as insurance and cellphone plans.

“For example, re-evaluate your homeowners policy. Most people will start with their auto insurance, but you can also save on homeowners as well,” says Kay.

Cutting the fat in your budget only works if you follow through and funnel the savings toward debt. To avoid overspending in the future, save in advance for known upcoming expenses.

Slashing spending and paying down debts without a bigger plan for the future is also a recipe for disaster. Avoid careening from crisis to crisis with a savings account set aside for special events. With direct deposit from your employer, your paycheck can be spread around several accounts, each earmarked for a separate purpose. Alternatively, some financial institutions will let you set up a recurring transfer between accounts — or even between banks — for free, so you don’t have to deal with the hassle of changing direct deposit instructions with your employer.

However the logistics work out, saving regularly throughout the year will give you ample funds by the time December rolls around. Get started now, though; there are only 337 shopping days until Christmas.