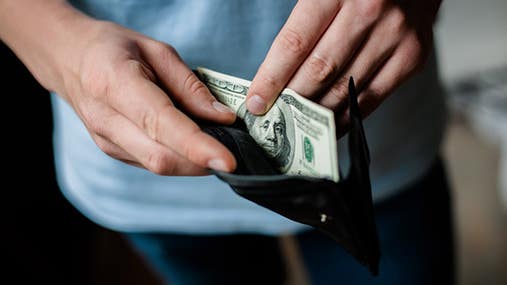 More than four years after the last recession officially ended, Americans are still holding onto their wallets tightly as they worry about the economy and as their paychecks barely keep up with inflation.

Nearly one-third of the respondents in a national poll accompanying Bankrate’s monthly Financial Security Index say they have to hold back on spending because their incomes have been stagnant.

“Since the so-called recovery began in 2009, the only group who has really seen an increase in household income is the top 5 percent,” says Elise Gould, an economist at the Economic Policy Institute, a Washington, D.C. think tank. “I don’t think people feel like they have more money to spend while their expenses are still going up.”

Average household income was a little more than $51,000 in 2012, virtually unchanged from the previous year, according to Census data released in September. And that’s 8 percent below the level from 2007, meaning many Americans are earning less than what they made before the recession started.

Amid the slow progress and despite recent economic improvements, consumers remain concerned about their economic future. Seven out of 10 respondents in Bankrate’s survey, conducted in early October, say they have to limit their spending each month, and nearly a quarter say the reason is they need to save more. Another 20 percent say they’re holding back because they’re worried about the economy.

“We’re stuck in a slow-growth economy, with high unemployment and one economic headwind after another,” says Greg McBride, CFA, senior financial analyst at Bankrate.com. “Stagnant incomes, lack of savings, and concern for the economy really sum up how people feel about their own financial security and the impediments to making meaningful progress.”

The aspiration to build up savings appears to be the only good news in this survey, says Daniel Roccato, adjunct assistant professor of economics at Rutgers University.

“Americans at least are more aware of the fact that we have not been at the top of our class with regard to our ability to save, and are planning to do something about it,” Roccato says.

But many of those who want to save might not be able to stick to that plan, even though they understand the importance of having a rainy-day fund.

“The lessons of the recession, especially the prevailing issue of long-term unemployment, really drove home the importance of having savings to weather an income reduction or outright job loss,” McBride says. “While people recognize the importance of savings, they’ve made very little progress in building up savings and, as a result, are perpetually uncomfortable with what savings they do have squirreled away.”

Vicious circle for consumers and economy

When your income stays unchanged while the cost of living goes up, the only way to save more is by cutting back further on consumption, Roccato says. Reduced consumer spending can hurt the economy, at least in the short term, potentially giving you even more to worry about, he adds.

As consumers remain worried about the economy and their stagnant wages, they are reluctant to take on new credit card debt, notes David Nice, associate economist at Mesirow Financial in Chicago.

“Without pay increases, it is difficult for individuals to take on additional spending, especially now with individuals unwilling to take on credit card debt to make purchases,” he says.

Consumer credit card balances in the U.S. declined for the third consecutive month in August, as indicated by data released this month by the Federal Reserve. Consumers’ revolving credit, which mainly reflects credit card debt, fell by $6.5 billion over three months to a seasonally adjusted $848.9 billion.

Still, many consumers feel they owe too much. Eleven percent of the respondents in Bankrate’s survey say too much debt is the reason they’re limiting their monthly spending.

Surprisingly, only 6 percent of consumers in the survey say they are holding down spending because they are worried about their job.

“It appears that most folks feel somewhat secure that the job they are going to today will be there tomorrow,” Roccato says. But those respondents who named concerns about the economy as the reason they’re limiting spending also are concerned about job security, in a way, he adds.

“People tend to personalize this when they are asked about their jobs, so maybe they think, ‘My job seems OK, but my neighbor’s seems a little bit shaky,'” Roccato says.

No shopping sprees for a while

Consumers’ feelings about jobs and the economy play a major role in how they spend, Nice says. And until Americans feel more confident about those things and their wages begin to increase, they will remain tightfisted.

“I think the lackluster jobs market and overall economy will continue to keep a cap on spending,” he predicts. “As soon as consumers start to see robust gains in the jobs market, alongside strong growth in the overall economy, they will feel more positively about their future and will hopefully receive real income increases that will allow them to take on more spending, as well as utilizing their credit cards.”