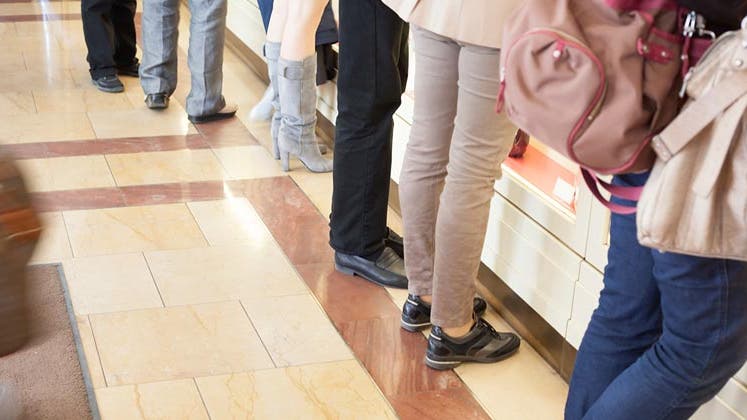 Going to the bank is basically like traveling to California by stagecoach or having milk delivered to your door straight from the dairy. A relic from another time, right?

Not so much. Despite the shift to online and mobile banking, bank branches continue to exist and many people still go to them. In fact, only about 1 in 5 Americans has gone an entire year without visiting a bank branch, Bankrate’s Financial Security Index for December shows.

Nearly half of Americans, 45%, have been in a bank branch for personal business within the past 30 days, according to the survey.

Most interesting is the fact that the loyalty to branches cuts neatly across demographic lines for the most part.

“There is no major distinction among those who are branch loyalists. They are going to branches because of consumer financial behavior, not because they are younger, more educated or have more money,” says Dan Geller, Ph.D., behavioral finance scientist at Analyticom, a behavioral economics and finance firm.

Why do people go to bank branches?

When nearly every transaction can be done on a smartphone, why would anyone go to a bank?

“When the level of financial anxiety increases, people tend to make more instinctive financial decisions, rather than analytical. This, for many people, means to physically be in the place where the money is. It gives them comfort seeing the place,” he says.

When people are less anxious about their finances, they are more open to doing things remotely, Geller says.

Who goes to the bank the most?

“The likelihood of having visited a branch in the previous 30 days declines with income,” says Greg McBride, CFA, chief financial analyst at Bankrate.com.

There are fewer banks

If you’ve gotten the sense that banks figure less prominently in the landscape recently, you’re correct. There are fewer banks now than there were 20 years ago. There were 6,270 commercial banks and savings institutions at the end of September 2015. In 1995, there were 11,971, according to the Federal Deposit Insurance Corp.

“We are seeing a reduction in bank branches in rural areas,” says Bert Ely, a consultant to the banking industry and founder of Ely & Co. Inc.

“Bank consolidation is leading to a drop in bank branches. A lot of that drop-off is in small towns and rural areas. That is happening across the country,” he says. People in rural areas in Bankrate’s survey were more likely to have been to a bank in the past month than those in urban areas — 50% compared with 44%.

What do rural folks do in the face of branch closings? “They have to drive further,” Ely says.

If you’re wondering why your bank has just one lonely employee drifting between a counter and the drive-thru, that’s why.

“Banks are reducing the number of people per branch,” says Mark Riddle, director of research and content delivery at BAI, a financial services research association.

“Branches are still very important, but transactions are shifting more digitally over time, which is impacting branch staffing,” he says. “They are shifting from transactions toward supporting more complex questions and serving customers’ financial needs.”

Even if tellers aren’t on hand to take your birthday check from Grandma, there’s still a lot for banks to do. After all, banks aren’t just about taking deposits and handing out lollipops.

Banks traditionally lend money to small businesses and individuals, and that role isn’t going away anytime soon. Many people still want to work with someone in person when taking out a mortgage or a car loan. For big purchases and complicated questions, there may be no easy substitute for in-person human interaction.

Plus, not everyone in every community is entirely on board the digital locomotive yet.

“Banks have obligations to the communities they serve. Under the Community Reinvestment Act, banks are encouraged to provide resources to traditionally underserved communities. The presence, or absence, of physical branch locations — in light of technological advances — is an integral part of the debate about how banks are meeting consumer needs,” says Dave Pommerehn, vice president and senior counsel for the Consumer Bankers Association.

For now, branches are sticking around. And according to Bankrate’s survey, most people will be happy about it.

The Financial Security Index uses a national telephone survey that’s conducted in English and Spanish by Princeton Survey Research Associates International. Calls were made Dec. 3-6, 2015, with 1,000 adults living in the continental U.S. The survey has a margin of error of plus or minus 3.7 percentage points.