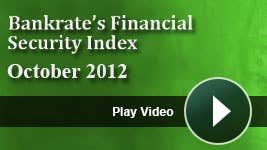 The Federal Reserve’s latest declaration to keep interest rates shockingly low until 2015 has not galvanized the populace into borrowing truckloads of money. In fact, most consumers say the Fed’s announcement does little to make them more inclined to borrow money, according to Bankrate’s October Financial Security Index.

Just 23 percent of consumers say they are tempted to take on more debt, but 74 percent say “no thanks” to low-rate borrowing right now, Bankrate’s survey reveals.

At the Sept. 13 meeting of the Federal Open Market Committee, the Federal Reserve’s monetary policy group, it was announced that the federal funds rate — the very short-term interest rate controlled by the Fed — will remain close to zero percent for a year longer than the group previously thought.

Though one of the stated aims of the central bank’s policy is to stimulate economic activity through consumer spending and borrowing, economic theory posits that the announcement may have the opposite consequence in the short term, according to Bill Hampel, senior vice president of research and policy analysis and chief economist at the Credit Union National Association.

Even in normal times, though, consumer loan demand is rarely moved by interest rates, says Hampel.

Though consumers do shop by price when they need a loan, a squishier metric is actually more influential when it comes to deciding whether to take on more debt: consumer confidence.

“If people were comfortable that they would be able to find jobs or keep their jobs, then, even if rates were a little bit higher, they would be willing to borrow more and spend. But that is not the situation,” says Brian Rehling, managing director and chief fixed-income strategist at Wells Fargo Advisors.

Uncertainty about everything from the recession in Europe, the presidential election and the looming fiscal cliff is limiting consumer confidence — as is the still-high unemployment rate, currently 7.8 percent, according to the Bureau of Labor Statistics.

All of that might be bearable if household incomes were moving up. But they aren’t.

Data from the Census Bureau released in mid-September show that real median household income in 2011 was $50,054, down 8.1 percent from 2007, the year before the recession began. Real income reflects the erosive effects of inflation.

“In today’s environment, it’s upside down: Incomes are falling. So, when incomes are falling, people worry, ‘How am I going to pay it back if I borrow?’ no matter what the interest rate is,” Barone says.

No shortage of debt

The most recent numbers from the Federal Reserve showed that total household debt is at 103 percent of disposable income.

Hampel says that number represents total debt in the household sector — both mortgage and nonmortgage debt combined. “It peaked at the beginning of the financial crisis at 123 percent. Normal, back 10 to 15 years ago, was somewhere south of 80 percent,” he says.

So what do low interest rates do?

In normal times, low interest rates might nudge consumers to borrow money, but the Federal Reserve intends to stimulate the economy by helping homeowners refinance their existing mortgages.

The most recent actions by the central bank — the announcement of the third round of quantitative easing, or QE3 — pushed mortgage rates to new lows. If many people can refinance their mortgages, that will free up some household income that can then be spent or invested.

But refinancing isn’t taking on new debt; it’s just repackaging debt that’s already on the books, so to speak. The real rush to borrow money may only come just before the sale ends, about three years from now.