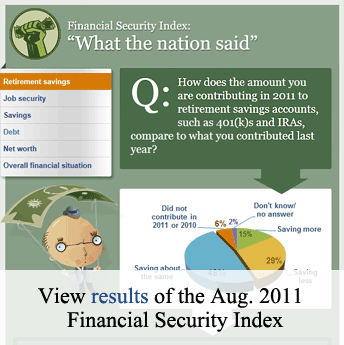 Bankrate’s Financial Security Index, which gauges the level of uncertainty and insecurity among Americans, plunged to 92.3 from 95.6 last month. The range is 50 to 150, with 100 signifying that consumers feel the same level of financial security as they did 12 months ago. A number that’s less than 100 means consumers are feeling less secure, while a number more than 100 indicates a higher level of security.

In nearly all areas of their finances — job security, savings, net worth and overall financial security — Americans’ feelings sunk to a new low since December, when Bankrate began commissioning Princeton Survey Research Associates International to poll consumers on a monthly basis.

Today, nearly half, or 47 percent, of Americans say they are less comfortable with their savings compared to a year ago, up from 35 percent in May.

After posting mostly gains since its recovery began in March 2009, the Dow Jones Industrial Average in recent weeks took a decidedly negative turn, rattling investors. Three out of 10 Americans report their net worth is lower than it was 12 months ago, while just 2 out of 10 say it’s higher.

In most areas of personal finance, consumers’ moods have shifted toward pessimism.

This month, Bankrate also asked Americans how much they’re contributing toward their retirement savings. In the story, “Retirement savings low on priority list,” Bankrate reporter Sheyna Steiner reveals that nearly 3 out of 10 Americans are saving less this year for retirement than they did last year. These days, saving for retirement is more important than ever before. The experts she talked to make a case for paying yourself first, even when times are tough.

Also, for an in-depth look at this month’s Financial Security Index findings, check out Bankrate’s slideshow, featuring analyses of specific demographic information and advice from experts.