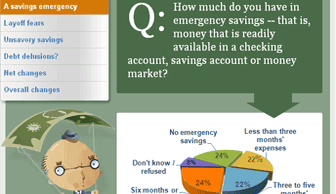 Home prices are still falling, unemployment is once again rising and the stock market lost ground every week in May.

But while the signs of a possible double-dip recession are increasing, this month’s Financial Security Index poll discovered a frightening fact: Roughly half of Americans are dangerously unprepared for a personal financial emergency.

Bankrate’s Financial Security Index poll for June found 24 percent of Americans have no emergency savings at all. Another 22 percent said their emergency savings would cover, at best, three months’ worth of expenses.

Only one in four said they have six months’ worth of expenses for use in emergency, the minimum recommended by many financial planning experts.

“It still looks like a lot of people are skating on very thin ice,” says Frank Armstrong, a Certified Financial Planner and president of Investor Solutions in Miami.

Not surprisingly, higher-income earners were most likely to have a cushion of savings to fall back on. However, even this desirable demographic has surprisingly sparse savings levels.

“Those most likely to have an adequate savings cushion are individuals in their 50s and 60s, and higher-income households,” says Greg McBride, CFA, senior financial analyst at Bankrate.com. “But even among these groups, at least half do not have six months’ expenses in an emergency fund.”

Certainly, there’s one simple reason why millions of American households aren’t prepared for the next recession. It’s because they haven’t recovered from the last one yet.

Job creation has been shockingly slow during the economic recovery, and in fact unemployment last month ticked up to 9.1 percent. According to McBride, more than 6 million Americans have been unemployed more than six months. Their emergency funds are low because they’ve had to drain them.

In that sense, the Financial Security Index’s findings suggest a renewed recession could be particularly devastating to American households. In 2008, the country entered a recession after a long economic boom. If a recession occurred now, it’d be after several years of economic struggles for many families.

Eddie Reece, a psychotherapist who works with clients on financial issues, isn’t surprised that many people with the apparent means to prepare for a rainy day are failing to do so.

“Psychologically, the amount of money doesn’t matter,” Reece says. “What matters is the relationship someone has to money. So, if you have a very sensible relationship with money and do all the things you’re supposed to be doing, you will have your emergency fund whether you’re making $20,000 a year or $1 million a year.”

Experts say too many people put off saving until they have extra money. All too often, that day never comes.

“It’s like dieting,” says Mark Cortazzo, CFP, and founder of Flat Fee Portfolios of Parsippany, N.J. “People feel as though they’re sacrificing and feel like they have less.”

As is often said about diets, his advice is to incorporate a sustainable savings routine into your everyday life. Keep your eye on long-term goals.

“If you get a raise, take half of the raise and add it to your savings and keep the other half,” he says. “You’re not taking anything away; you’re just getting less of an increase.”

If need be, put your savings systems on autopilot, such as direct deposit from your paycheck. “Make it palatable so that you can sustain it,” says Kimberly Foss, CFP and president of Empyrion Wealth Management in Roseville, Calif.

Don’t be afraid to start small. Those first few baby steps can put you on the path to surviving the next financial emergency. “If you can’t save $500 per paycheck, start with $50,” Foss says. “Then do $50 again on the second paycheck that month. The next month, bump the total saved up to $125 or $150. The following month, save $200.”

This month’s Financial Security Index also found more Americans feeling uncomfortable with their level of savings in general, 39 percent versus 35 percent in May. But on a brighter note, “consumers’ comfort level with debt reached a new high, with 26 percent saying they’re more comfortable and only 19 percent saying they’re less comfortable with their debt relative to 12 months ago,” says McBride.

The Financial Security Index for June was down slightly, to 97.8, from 98.5 in May. While minor, the drop could indicate that the succession of natural disasters and negative economic news is beginning to wear on the minds of consumers.

The Financial Security Index survey was conducted by Princeton Survey Research Associates International, or PSRAI, with a nationally representative sample of 1,006 adults living in the continental United Sates. Interviews were done in English by Princeton Data Source from June 2-5, 2011. Statistical results are weighted to correct known demographic discrepancies. The margin of sampling error for the complete set of weighted data is ±3.6 percentage points.