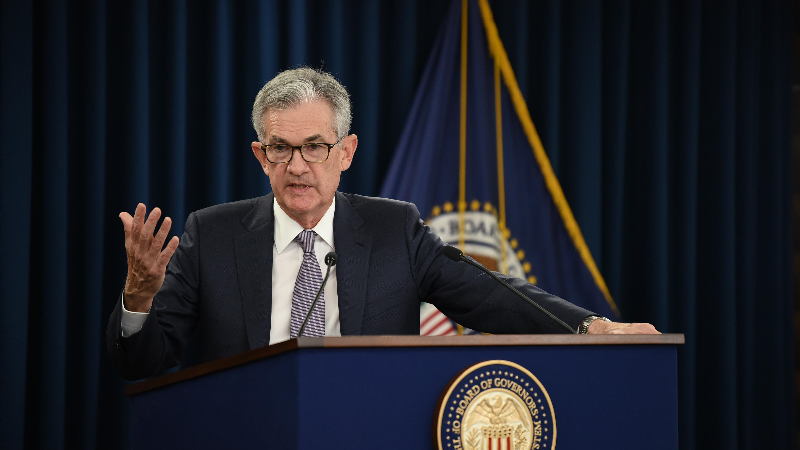 Federal Reserve policymakers lowered borrowing costs for the third time this year in an effort to help sustain a record-long U.S. economic expansion, but they might now be ready to tap the brakes on more cuts.

The U.S. central bank voted Wednesday to reduce its benchmark interest rate by 0.25 percent, or 25 basis points, the same move that officials made at both the July and September meetings. But it removed the key phrasing “act as appropriate to sustain the expansion” from its policy statement, suggesting they’re comfortable with policy — at least for now.

“The Committee will continue to monitor the implications of incoming information for the economic outlook as it assesses the appropriate path of the target range for the federal funds rate,” the Federal Open Market Committee (FOMC) said in its post-meeting statement, released at 2 p.m. ET in Washington.

The move brought the federal funds rate down to a target range of 1.5 percent and 1.75 percent, where it was before the June 2018 rate hike.

Rate cuts have different meanings for both savers and borrowers. Typically, borrowers benefit from rate cuts because reductions shift down the cost of borrowing money. The move will likely push down interest rates on auto loans, as well as variable-rate mortgages and home equity lines of credit (HELOCs). The interest rate on your credit card will also likely fall.

Savers, however, aren’t the first in line to benefit. When the Fed cuts rates, banks lower their yields on savings accounts and certificates of deposit (CDs) as a result. That means you get less money for stashing your cash.

“Returns for online savings accounts will drift lower following the latest rate cut but will remain light years ahead of the 0.1 percent that most banks are paying and where most consumers have their savings stashed,” says Greg McBride, CFA, Bankrate’s chief financial analyst. “The medicine has been administered, now we wait to see if it works.”

Throughout 2019, Fed officials have been keeping an eye on geopolitical tensions, as well as an economy that’s been slowing both globally and domestically.

The U.S.-China trade war took center stage during the July and September policy decisions, with officials cutting rates largely to counteract the drag its caused on the outlook, business investment and uncertainty. Officials stressed that the economy was still in a good place, comparing the reductions to taking out insurance on a car or a home in case of an unexpected emergency.

Those threats might be dissipating. President Donald Trump indicated that the U.S. and China are nearing an early “Phase 1” trade deal. Fed Chair Jerome Powell said that risks threatening the U.S. economy are “moving in a positive direction,” mostly because of these developments.

But new risks are becoming more apparent in the data. U.S. employers in the private sector have been hiring at a slower pace. Manufacturing activity is contracting. And even though consumers helped prop up growth at a 1.9 percent pace, sentiment gauges are starting to moderate, showing that they may start to feel jittery about the economy.

In one of the only changes to the Fed’s post-meeting statement, Fed officials said business investment and exports “remain weak.”

Powell said “there’s plenty of risk left” during his post-meeting press conference with journalists, but he made clear that officials expect a solid economy moving forward, describing hiring and consumer spending as “strong.”

“We see the current stance of policy as likely to remain appropriate, as long as incoming information about the economy remains broadly consistent with our outlook,” Powell said. “We believe monetary policy is in a good place.”

The October decision also marked the fourth straight meeting of dissents for Powell, with Boston Fed President Eric Rosengren and Kansas City Fed President Esther George preferring no adjustments. St. Louis Fed President James Bullard, however, approved of the policy decision this time around, after dissenting from the majority in June and September.

In total, the Fed has now cut rates by 75 basis points across its July, September and October reductions. That’s similar to the round of easing that took place in the 1990s, when Fed officials cut borrowing costs at three straight meetings while the economy was still expanding. Officials then likened it to a mid-cycle adjustment, and that’s been the similar messaging the Fed has adopted in its current round of stimulus.

Will the rate cuts boost the economy?

Powell told journalists that policy often acts with a lag and that much of the enacted stimulus won’t be realized until months down the road. That may suggest officials prefer to wait-and-see just how much the cuts they’ve already provided will boost the economy.

“There’s something to be said with this three-and-done scenario,” says Michael Reynolds, CFA, investment strategy officer at Glenmede. “We often describe monetary policy as a blunt instrument. There’s not an immediate effect to all of these things or how it blows through the economy. The Fed is going to try to take stock of that over the next few months.”

But that doesn’t mean the Fed will be quick to hike rates again. During the press conference, Powell said officials will be closely watching inflation to tell when it’s time to start raising borrowing costs. Inflation, however, has been running below the Fed’s target for most of the current expansion.

Over the past six months, it’s averaged out to 1.6 percent, judging from the Fed’s preferred measure of personal consumption expenditures.

Markets cheered the message, with the S&P 500 closing near a record high.

“It was a bit of a dovish and hawkish message,” Reynolds says. “Hawkish in the sense that it doesn’t seem like more rate cuts are inevitable at this point, but dovish because he set a pretty high bar for rate hikes moving forward. It’s going to be inflation; all eyes are on inflation. It just doesn’t seem as symmetrical that rates can go in either direction.”

Messaging from the October meeting may seem to contradict Powell’s notion that officials are making policy decisions on a meeting-by-meeting basis, says Ken Matheny, executive director of Macroeconomic Advisers by IHS Markit. Though it’s still a relevant phrase, it’s not as useful anymore, he says.

“He’s saying, ‘We think we’ve probably done enough. We are going to continue to assess incoming developments, but unless there’s a major surprise, we’re done with this easing cycle,’” Matheny says.

That likely signifies a tone shift for Fed watchers moving forward, he says, one that’s not as focused on the downside risks.

“A lot of the market commentary in recent months has been focused on downside risks to the outlook and how much accommodation the Fed was going to add,” Matheny says. “Now, with the FOMC statement and the chairman’s press conference in essence saying, ‘Hey, we think we’re done for now,’ questions start to rise: If you’re done, then that means the next move is just as equally likely to be up as down, so what are the conditions that will cause you to think about raising rates?”

But that reduction might come as a disappointment to Trump, who has publicly berated the Fed and its chair. Since July, when the Fed cut rates for the first time in more than a decade, Trump has tweeted about the U.S. central bank 67 times.

Trump on Tuesday continued his attacks, tweeting that the Fed “doesn’t have a clue.” Just a week earlier, he said officials would be “derelict in its duties” if it doesn’t lower rates or stimulate the U.S. economy through other measures.

Savers can likely breathe a sigh of relief, now that the Fed doesn’t look like it’s going to be cutting rates again anytime soon. Though rates have fallen from where they were at the beginning of 2019, you can still find a savings account that yields higher than the national average. (Use Bankrate’s tools to find the right option for you.)

Borrowers, however, may still have some time to take advantage of the Fed’s three rate cuts, McBride says.

“Mortgage rates are one full percentage point lower than this time last year and the refinancing window remains wide open for many homeowners,” McBride says. “Being able to trim $150 per month out of the household budget by refinancing to a lower rate could be the pay raise homeowners didn’t otherwise get.”