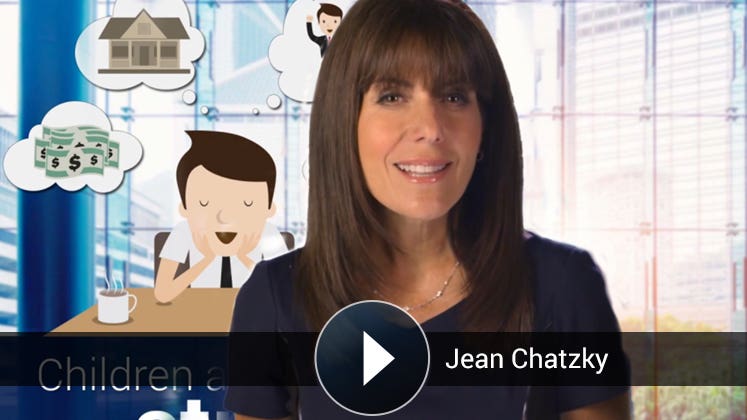 You or someone you know probably has an adult child living at home. According to Pew Research Center analysis of U.S. Census Bureau data, the number of young adults living at home rose to 36 percent in 2012.

This begs the question for parents who think kids should live their own lives at some point: When should you cut the financial cord?

Children should begin earning for themselves at an early age by contributing to household chores and taking on extra tasks to earn cash, says family finance expert Ellie Kay. Make sure children understand their responsibilities, and contributions will increase as they get older.

“If you set a precedent that you will just hand over cash every time kids ask, the problem can exacerbate as adult financial responsibilities and mistakes take over,” she says.

David Bakke, a personal finance reporter, says his parents gave him the rule that if he wanted to buy something, he had to earn the money to pay for it. Today, he says it’s “one of the best things my parents did for me.”

This system also applied to Andrew Schrage, one of Bakke’s reporting colleagues. Schrage’s parents made him save up for a car as a teen. “Although, they did sell me one of their old cars at a significantly reduced rate and (paid) for my auto insurance into my late teens,” he says.

Kay agrees that if a teen wants to drive, he or she should pay for his or her own car. She also thinks teens should be required to pay for a portion of their auto insurance, so they appreciate what it costs.

Entitlement is especially prevalent in kids today who did not earn their own way in and have no idea what items cost, Kay says.

“As parents, we owe our children food, clothing, health care and shelter, not fun with friends, designer clothing, cellphones with data plans, a car or a party-school college experience,” Kay says. “If kids want those things, they need to earn it for themselves. Otherwise, they feel entitled instead of appreciative.”

She emphasizes that when kids work for things, they value them more. And this includes a college education.

Students who choose to work a moderate amount toward their college expenses often do better academically, according to the nonprofit College Board. Eighty-five percent of first-time, full-time undergraduate college students received some type of financial aid from academic years 2006-07 to 2010-11, according to the National Center for Education Statistics.

Start cutting the cord on college financing early. Kay says to let teenagers know a portion of their time must be spent earning money for college, whether it be from a higher GPA or excelling in extracurricular activities. Kay says researching local, affordable schools; applying for state scholarships, grants and work-study programs; or joining the military are all ways to reduce college costs and earn money for college tuition and living expenses.

She adds that raising adults who take responsibility is the goal because that time period between ages 18 and 22 is when you should be cutting the cord on most financial responsibilities.

“Giving teenagers access to your credit card sounds counterintuitive, but avoiding the topic is a horribly misguided approach to teaching kids how to use credit and achieve a good credit score,” says John Ulzheimer, president of consumer education at SmartCredit.com. “You have to assume they will use a credit card, so teach them how to use it sooner rather than later. Adding your older teen to your credit card account is the equivalent of driver’s ed and a learner’s permit when it comes to credit usage,” he says.

Ulzheimer and Kay agree on never co-signing for loans or credit cards for your kids, no matter what age. “If you co-sign, they control the card or loan but you have equal debt liability if an account defaults. It puts your own debt-to-income ratio and credit score at risk,” says Ulzheimer.

Kay says, “The baby boomer trend is to bail out their adult kids repeatedly, which deteriorates parents’ own wealth and retirement.”

When to cut the cord

A “boomerang kid” is an adult child who returns to live at home again later in life.”When a boomerang fails to launch or refuses to leave home, you’ve got to cut that cord,” says Kay. “Make it as uncomfortable as possible for that adult child to live at home. Instead of feathering the nest, add a few pine cones to make leaving the nest seem more attractive — and then they will fly.”

More On Finances And Children:

Read more From Naomi
Naomi Mannino is a contributing writer at Bankrate. Naomi writes about loans and banking.