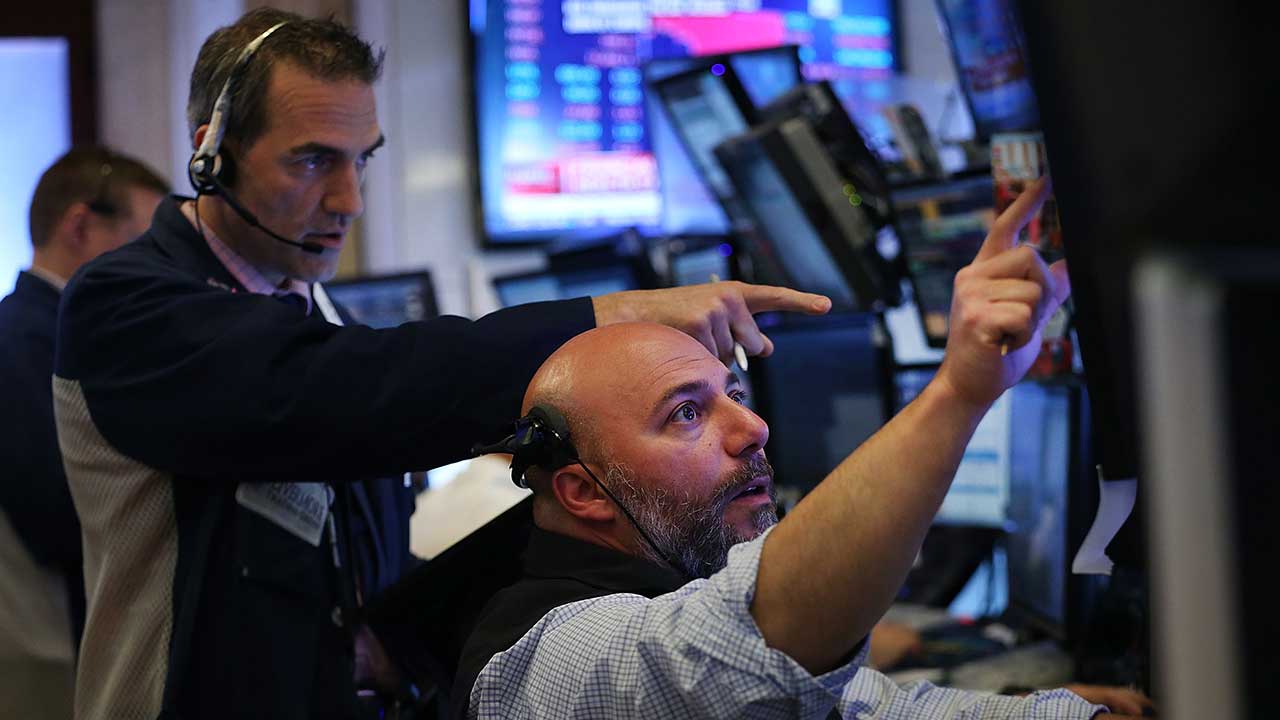 When it comes to managing their financial lives, Americans should make hay while the sun shines.

Experts say the economic outlook is bright, at least in the short term, according to Bankrate’s Second-Quarter Economic Indicator survey of 18 top economists. Additional job growth is expected and the unemployment rate is predicted to keep falling.

“Strong economic growth, with real GDP growth close to 3 percent, should absorb most of any slack left in the labor market,” says Lynn Reaser, chief economist at Point Loma Nazarene University. “Only those primarily between jobs or lacking critical skills will be remain in the jobless count.”

But all good things must come to an end. Analysts surveyed by Bankrate predict we’ll see an economic downturn sooner rather than later. Mortgage rates will continue to tick up, and there’s a good chance that we’ll see at least two more Federal Reserve interest rate hikes before the end of the year.

Consumers should aim to get their finances on track before the economy starts to lag. Don’t wait to start chipping away at a mountain of debt or padding the emergency fund in your savings account.

Is a recession around the corner?

The current bull market celebrated its ninth birthday in March. But the next economic slowdown could be closer than you think.

In all, more than three-quarters (78 percent) of the economists who were surveyed think a recession will rear its ugly head within three years: 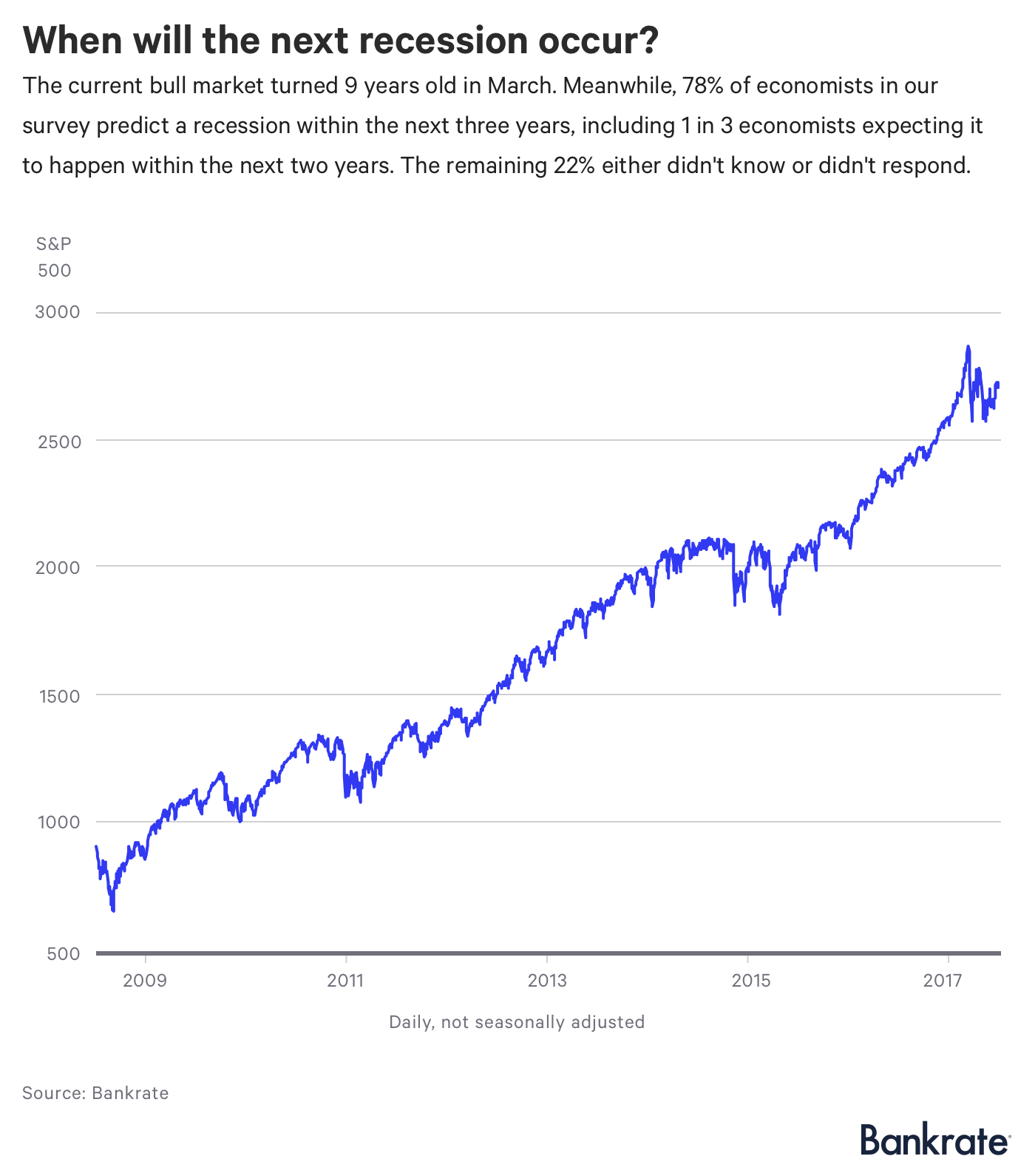 “This business cycle is shaping up to end in a traditional way, where the economy and inflation heats up, and the Fed must raise rates to cool it off,” says Robert Frick, corporate economist at Navy Federal Credit Union. “Given wage and inflation pressures seem subdued, and the pace of the expansion has been slow, a recession may not occur until late 2020.”

Four in 10 U.S. adults can’t cover a $400 emergency expense, according to the latest report from the Fed. If you’re unprepared to face the unexpected — or survive a potential economic downturn — now’s a good time to open a new savings account. The best ones pay around 2 percent APY.

Job growth to continue, but at a slower pace

The economy has been steadily adding jobs month to month as employers scramble to find top candidates to fill open positions. Overall employment growth, however, will probably slow over time.

Meanwhile, the percentage of jobless Americans actively seeking work continues to decline. Some 89 percent of the economists told Bankrate they expect the unemployment rate to remain below 4 percent a year from now. It’s currently 3.9 percent. 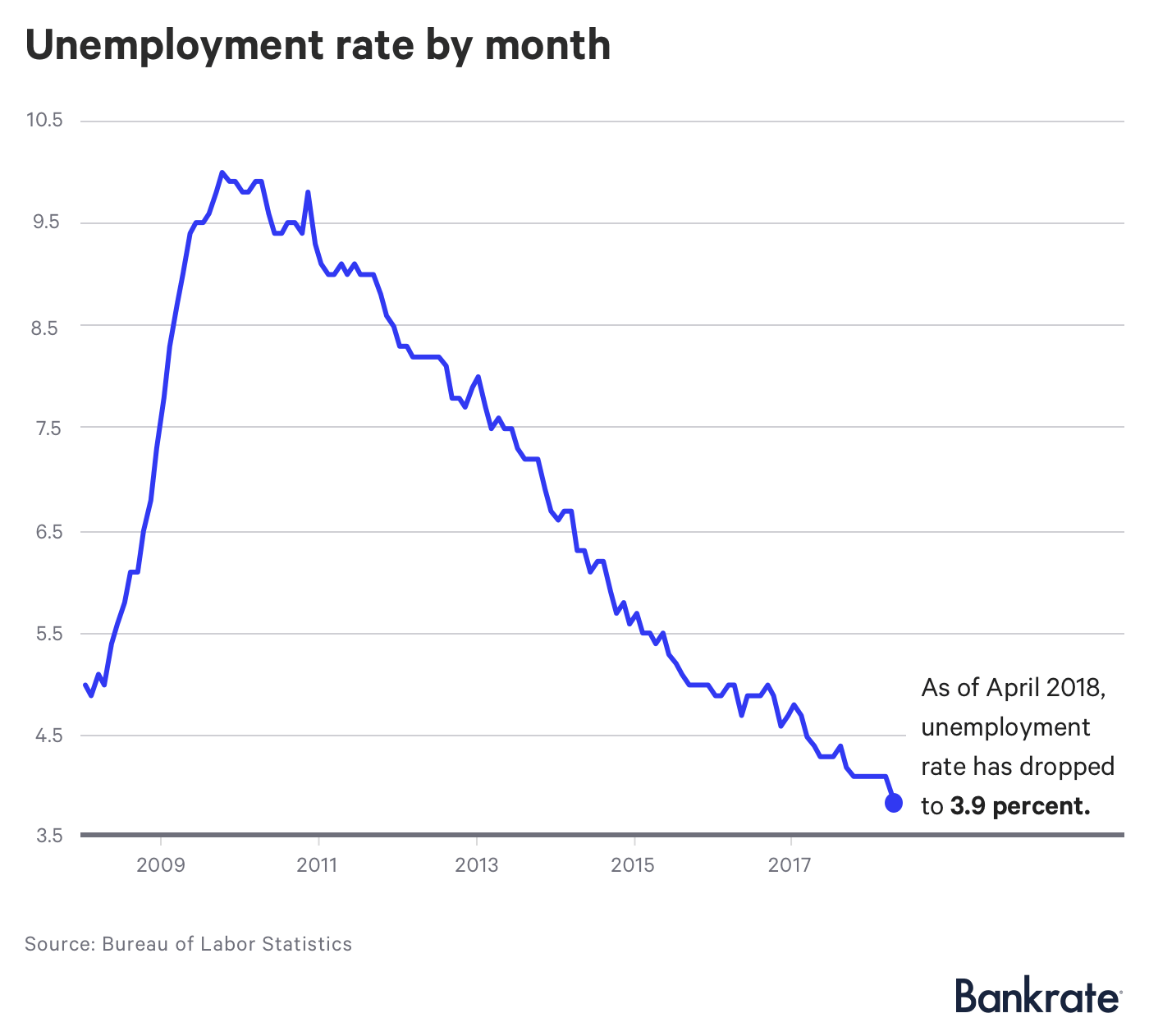 Inflation is finally starting to pick up, and monetary policymakers haven’t been shy about their plans to keep the economy from getting too hot.

Most of the market is prepared for an interest rate hike at the next Fed meeting in June. And 83 percent of survey respondents anticipate that we’ll see a total of three or more increases in short-term interest rates in 2018. Half of them expect the Fed to hike rates at least four times in 2018. 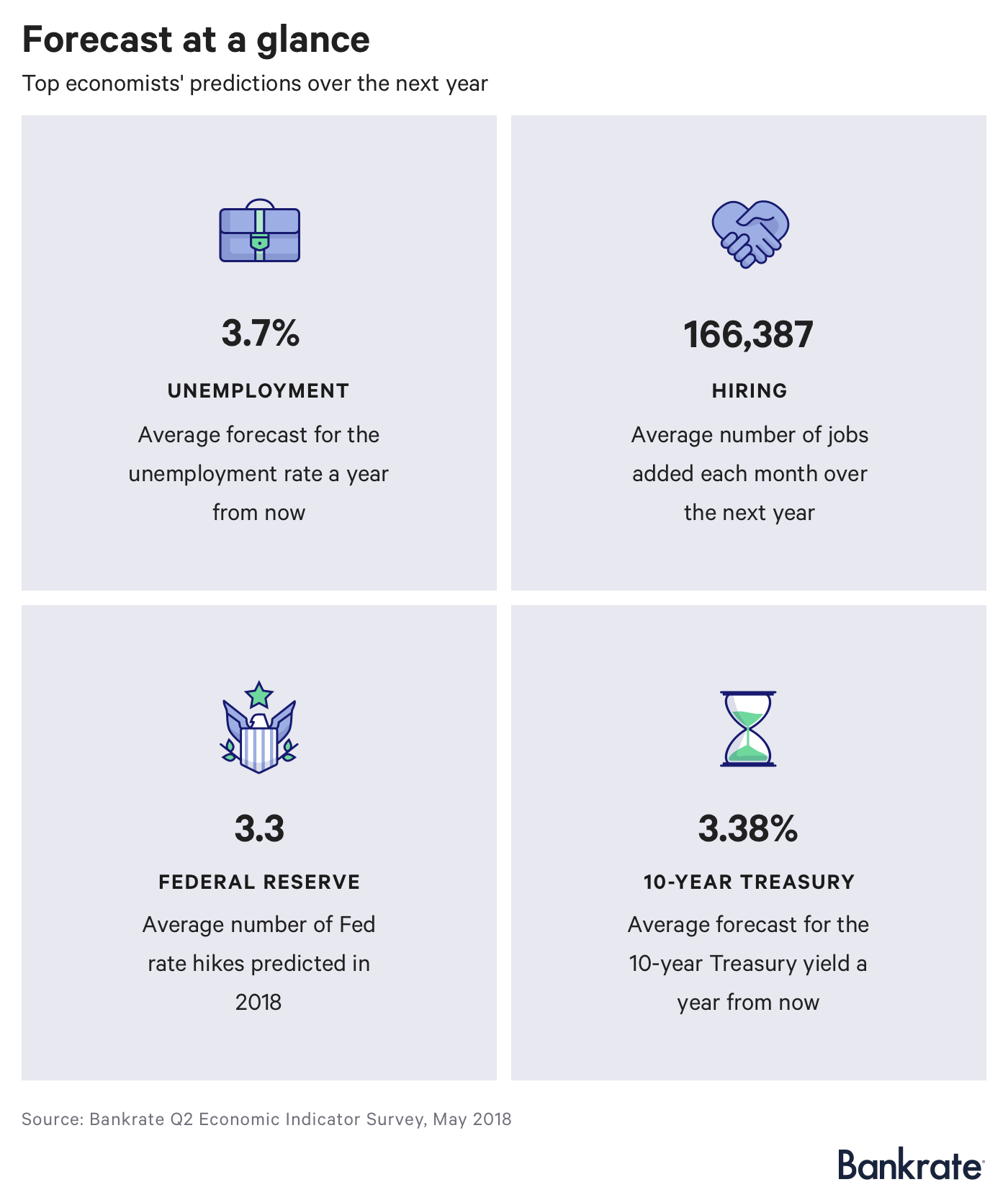 Don’t be surprised to see mortgage rates rising as well, particularly as the Fed unwinds its trillion-dollar balance sheet. The forecast for the 10-year Treasury note — the benchmark for 30-year fixed mortgage rates — is slightly higher than it was in the first quarter. Two out of three economic experts predict a yield between 3 percent and 3.49 percent.

Borrowers struggling to get their debt under control should get ready to face the music. Higher interest rates in the coming months means you’ll be paying more out of pocket.