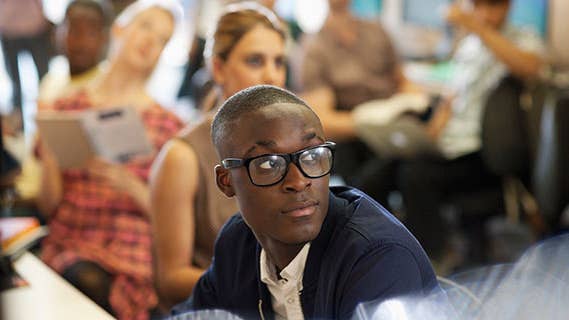 It’s not getting any easier to pay for college. Students are strapped an ever-growing amount of student loan debt.

Kantrowitz, now publisher and vice president of strategy at Cappex.com, sees the jump as a major financial hurdle facing college graduates, as if finding a job and moving away from college aren’t stressful enough.

“The failure of federal and state grants to keep pace with increases in college costs on a per-student, inflation-adjusted basis shifts the burden of paying for college from the government to the family,” Kantrowitz says.

It forces 2 options on families — go to a lower-cost school or borrow more. Neither strategy appeals.

Help from the administration?

Last week, the Consumer Financial Protection Bureau came out with its Payback Playbook, which would provide borrowers with personalized information about their repayment options from loan servicers so they can plan on a monthly payment they can afford.

“Millions of consumers needlessly fall behind on their student loan debt, despite their right under federal law to a payment they can afford,” bureau Director Richard Cordray says.

Even so, Kantrowitz says the playbook would violate the Truth in Lending Act if implemented by a private lender, although the largest share of loans are federal student loans.

“The Obama administration is trying to steer all borrowers into income-driven repayment,” he says. That can be a problem for some borrowers because it increases the cost of the loan.

The repayment term should be a standard 10-year period, Kantrowitz says.

“Anything more, and it starts affecting the next generation,” he says.

It has set a deadline of June 12 for comment as part of its request for information on borrower loan communications.

Is student loan debt becoming a problem for millennials? Is it still a problem for Gen. Xers and baby boomers? What do you think?Tweet to @sfpounds