Skip to Main Content
2 min read Published April 08, 2022
Written by
Brian Baker
Written by Brian Baker Investing reporter
Bankrate reporter Brian Baker covers investing and retirement. He has previous experience as an industry analyst at an investment firm. Baker is passionate about helping people make sense of complicated financial topics so that they can plan for their financial futures.
Brian Baker
Edited by
Brian Beers
Edited by Brian Beers Managing editor
Brian Beers is the managing editor for the Wealth team at Bankrate. He oversees editorial coverage of banking, investing, the economy and all things money.
Brian Beers

Net asset value, or NAV, represents the value of an investment fund and is calculated by adding the total value of the fund’s assets and subtracting its liabilities. Mutual funds and ETFs use NAV to calculate the price per share of the fund.

NAV is calculated by adding up what a fund owns and subtracting what it owes. For example, if a fund holds investments valued at $100 million and has liabilities of $10 million, its NAV will equal $90 million. Further, if the fund has one million shares outstanding, the NAV per share will be $90.

The net asset value formula for a fund looks like this:

The assets and liabilities of an investment fund typically change daily, so NAV will change from one day to the next.

Mutual funds calculate their NAV per share daily and that is the price you’ll pay to buy or sell shares in the fund. Mutual funds aren’t traded throughout the day like stocks, but instead are priced at the end of the trading day. If you’re purchasing or selling shares in the fund, you’ll receive the next available NAV price. Placing a trade order during the day before market close will allow you to receive that day’s NAV as your price, but orders placed after market close will be executed at the next day’s closing NAV.

Most mutual funds are open-end, which means shares are issued and repurchased directly by the fund. But another type of fund known as closed-end funds aren’t required to repurchase shares from shareholders and as a result shares of these funds may not trade for NAV. Closed-end funds sell shares in public offerings, after which the shares are traded at market prices on exchanges. The shares may sell above or below the fund’s NAV.

ETFs have many similarities with mutual funds, but they trade more like stocks. ETFs calculate their NAV daily, but also estimate the NAV every 15 seconds throughout the business day. This estimate is published on several financial websites. An ETF may trade at a premium or a discount to its NAV at any given time.

It may seem like comparing a fund’s change in NAV over time is a good way to calculate investment performance, but that approach ignores some key data. Funds typically distribute income like dividends and interest to shareholders, which lowers a fund’s NAV. Mutual funds also distribute realized capital gains, which also lowers the NAV. Looking at the change in NAV between two dates won’t account for these distributions.

It’s better to look at the fund’s total annual return over time to understand its overall performance more fully. This information can be found on the mutual fund’s website or in its prospectus.

NAV is a fairly simple calculation that you will run into often when investing in mutual funds and ETFs. Make sure you understand how and when it was calculated for funds you’re considering and make sure to look at total annual return data when comparing fund performance. 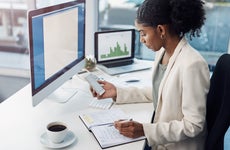 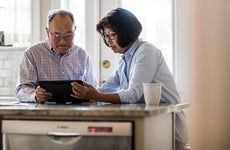 What is an ETF? Learn about exchange-traded funds 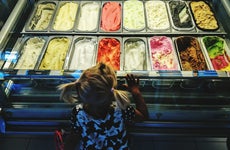 What is asset allocation and how does it work? 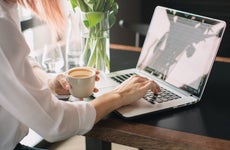 What is net income? Definition and how to calculate it