Skip to Main Content
6 minute read Published August 30, 2022
Written by
Jason Steele
Written by Jason Steele Travel Rewards Expert Contributor
Jason Steele is a professional journalist and credit card expert who has been contributing to online publications since 2008. He was one of the original contributors to The Points Guy, and his work has been appearing there since 2011. He has also contributed to over 100 of the leading personal finance and travel outlets.
Jason Steele
Edited by
Liliana Hall
Edited by Liliana Hall Associate Editor
Liliana is an editor and journalist with a background in feature writing on the Bankrate Credit Cards team.
Liliana Hall

Eviction is a word that doesn’t sound very good to most people, and for good reason. It means you’ve been legally forced from your home, usually because you failed to pay your rent. So, it’s logical to assume being evicted will hurt your credit. But you might be surprised to learn that the eviction order itself isn’t what hurts your credit directly.

An eviction is when a landlord gets a court order to legally remove a tenant from a property. Evictions occur when a tenant has violated the terms of the lease, typically for failing to pay rent. However, tenants can be evicted for other reasons such as committing crimes or acts of violence, not complying with community health and safety standards or for having unauthorized subletters or pets.

It’s been estimated that there are roughly one million evictions in a typical year in America, which means around 2.3 million people are removed from their homes every year. South Carolina has the highest eviction rate of any state at 6.2 percent, according to News America, and other states with high eviction rates include Arizona, Virginia and Delaware.

Furthermore, non-white households have higher rates of eviction than predominantly white households, according to Eviction Lab, and women are evicted at a rate of 16 percent more than men.

What to do if you receive an eviction notice

When you receive an eviction notice, you are being informed that a legal process has been initiated. This can lead to the court issuing an eviction order. Some evictions are curable, meaning that there’s action that can be taken to fix the problem and remain in your home. For example, if you’re behind on your rent payments, you can catch up.

But with an incurable eviction notice, you’ll have no choice but to vacate. Thankfully, you always have the right to appear in court and fight the eviction. The rules vary from state to state and even in certain cities, so it’s up to you to learn the laws of your community or contact an attorney that can help you.

What happens if you get evicted?

As with most court proceedings, you are allowed to have an attorney when your case is heard. Not having a lawyer can put you at a severe disadvantage compared to the landlord. Fortunately, there are organizations that can help tenants facing an eviction fight in court, such as community legal services and legal clinics sponsored by your local bar association.

But if you’ve had your day in court and lost, the judge will likely issue an eviction order forcing you to move out as soon as possible. If you don’t leave when ordered to, many jurisdictions allow the police to help enforce a judge’s eviction order. That’s why you should be looking for a short term living arrangement anytime you’ve received an eviction notice and are awaiting a court date.

Does eviction show up on your credit report?

An eviction order will also appear in public records, which future potential landlords could discover. An eviction notice can appear in your city or state’s website, and there are numerous tenant screening services that landlords can use to find eviction records. You can also request copies of your credit reports that can show any collections accounts related to past due rent.

Needless to say, if potential landlords find out that you have been evicted, they will be far less likely to rent their property to you.

How to remove an eviction from your record

If you’ve been wrongly evicted, you can pursue legal action in court. And if you’ve had past due rent go to collections, then you can settle it. Once settled or paid off, you can also ask to have any collections accounts removed from your credit report. Another tactic is to ask to have the eviction records removed from tenant-screening reports as a condition of repayment of past due rent.

Nevertheless, eviction orders can still show up in public records for as long as seven years. And while the eviction itself won’t appear on credit reports, it will continue to appear on tenant-screening services and other background checks.

How to avoid eviction in the first place

The best way to make sure that there isn’t a record of being evicted is to avoid the eviction altogether. If you’ve been issued an eviction notice, then you may still have time to fix the problem before going to court. If the reason for the eviction is failure to pay rent, catching up is one option.

But if you’re unable to pay what you owe, consider speaking to the landlord about possibly moving to a more affordable unit. And if there are other reasons for the eviction notice, it’s best to take action to fix them, rather than go to court and risk an eviction order. If you have the option of working with the landlord to solve the problem that led to the eviction notice, that will be your best option.

How to rent again after an eviction

If you’re looking for a place to rent again after being evicted, there are still some options. First, you could find a private landlord that may be willing to understand the circumstances that led to the eviction, and give you another chance. It can help if you can provide documentation of a special circumstance that led to your eviction that’s unlikely to reoccur, such as a health problem or a natural disaster. Offering up detailed personal references can also help.

If all else fails, consider trying to live with friends or family members while you rebuild your credit. For example, you could get a credit card for people with bad credit, and continue to make on-time payments to other lenders. You can also use a rent reporting service to include any rent you are paying under your current living situation.

The federal government’s Consumer Financial Protection Bureau (CFPB), lists many renter protection resources on its website.The National Center for State Courts also lists many local housing legal aid providers on its website. And if you feel that you’ve experienced housing discrimination, the following groups may be able to help:

Having an eviction on your record won’t directly affect your credit, but having a collection item related to an eviction will appear on your credit reports and hurt your credit score. The best way to prevent this is to work with your landlord and avoid being evicted. But thankfully, there are legal resources available to renters. By understanding what eviction is and how it affects your credit, you can do your best to make sure that it never happens to you.

SHARE:
Written by Jason Steele Travel Rewards Expert Contributor
Read more from Jason
Jason Steele is a professional journalist and credit card expert who has been contributing to online publications since 2008. He was one of the original contributors to The Points Guy, and his work has been appearing there since 2011. He has also contributed to over 100 of the leading personal finance and travel outlets.
Edited by
Liliana Hall
Edited by Liliana Hall Associate Editor
Liliana is an editor and journalist with a background in feature writing on the Bankrate Credit Cards team.
Liliana Hall
Associate Editor 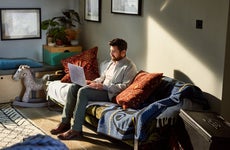 Evictions during the pandemic: What to know and where renters can get help 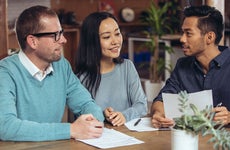 Rental lease agreement: Know what your lease means and how to get out of it 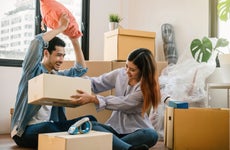 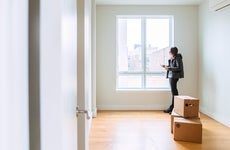 How to get an apartment with bad credit