Almost half of credit card holders (46 percent) carry debt from month to month, according to a recent Bankrate survey. That’s up from 39 percent a year ago.

Unfortunately, those balances cost more than ever. The average credit card charges 19.85 percent, the highest since we started tracking these rates in the mid-1980s.

The highest inflation readings in four decades and the Federal Reserve’s aggressive series of interest rate hikes meant to tamp down inflation are the primary explanations for the sharp increases in credit card balances and rates.

Why do people get into credit card debt?

Contrary to popular belief, most people get into credit card debt for very practical reasons. The top explanation is an emergency expense, according to research conducted by our sister site CreditCards.com. This illustrates the importance of building an emergency savings fund. Without one, your next unexpected medical bill, home repair or car repair could end up costing you a lot of money in credit card interest.

Day-to-day expenses are the second most common explanation for credit card debt. This category is especially relevant in the current climate since just about everything costs a lot more these days. Even though inflation has started to ease somewhat, grocery prices are still up almost 12 percent over the past year and shelter costs 7.5 percent more, per the latest Consumer Price Index.

Inflation is hitting people with lower incomes the hardest. They have less money to go around, and their budgets are primarily necessities, so there isn’t as much room to cut back. Our latest survey found that 55 percent of cardholders with annual household incomes under $50,000 carry balances from month to month.

How to get out of credit card debt

Paying down your credit card debt may sound easier than done, especially right now, but there are plenty of things you can do. My top tip is to sign up for a 0 percent balance transfer card. These allow you to move your existing high-cost credit card debt over to a new card with an interest-free promotion lasting as long as 21 months.

I think the best way to use one of these is to divide what you owe by the number of months in your 0 percent term. Try to keep to that fixed payment structure — it’s much harder to pay off the full amount if you leave it all until the end, or if you muddy the waters by adding new purchases.

A personal loan is another potentially useful form of debt consolidation. If you have good credit, you might be able to qualify for a rate as low as about 7 percent for as long as seven years. You could use this money to pay off your higher-cost credit card debt immediately and then pay off the personal loan rate at a more favorable rate over a longer period of time.

Finally, don’t forget about the fundamentals. Could you take on a side hustle, sell stuff you don’t need or cut your expenses? Every dollar you’re able to put toward your credit card debt represents a guaranteed, tax-free return. Depending on your interest rate, it could easily be 20 percent or more.

One thing is for certain: Try to pay way more than the monthly minimum. If you have the average credit card balance ($5,474, according to TransUnion) and you only make minimum payments at the average interest rate of 19.85 percent, you’ll be in debt for 202 months and will owe a grand total of $7,637 in interest. 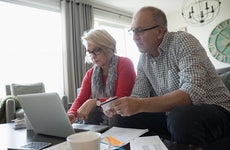