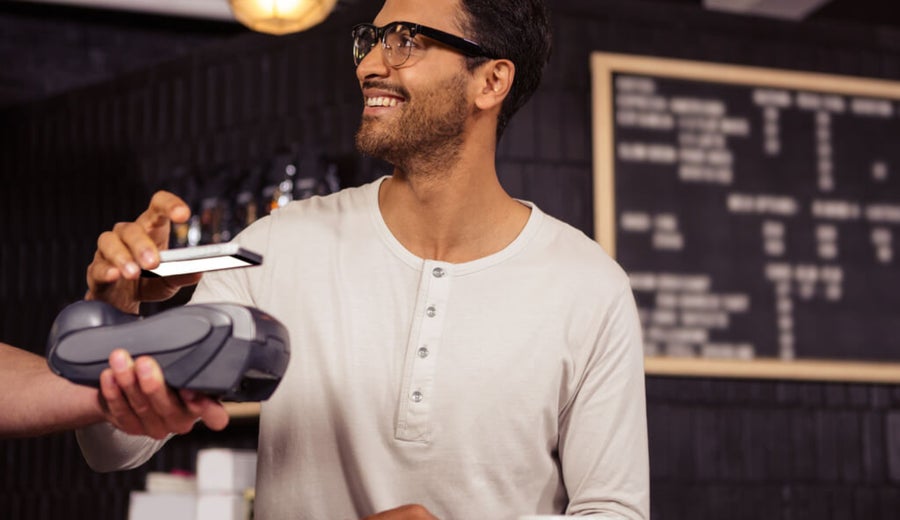 For a long time, mobile wallet services like Google Pay and Apple Pay were marketed as technology that could make shopping more convenient and secure.

While these benefits were real, it was the coronavirus pandemic that propelled digital payments into the mainstream.

To show just how quickly our habits changed, let’s take a look at some data from Safeway.

Clearly, as fewer shoppers want to handle cash or touch the keypads of point-of-sale terminals, more are turning to their mobile phones to pay.

So, it’s time to find out more about one of the key players in the digital payment sphere: Google Pay.

Just what is Google Pay? Is it secure? How does Google Pay work? And most important, should you use it?

Google Pay in a nutshell

Let’s start at the beginning.

Google Pay is a mobile wallet and payment system that came about after the merger of Google Wallet and Android Pay in January 2018.

It’s now one of the largest digital payment services in the world.

The way it works is that you download the Google Pay app and install it onto your smartphone or smartwatch. You can use Google Pay on your iPhone or iPad, too, but only if you’re in the U.S.

What’s interesting is that you don’t add money to your digital wallet — instead, you add a payment method, such as a debit card, credit card or your bank details.

Google’s secured servers store the details and retrieve them when you use Google Pay to complete a purchase.

Think of a mobile wallet being just like a physical wallet but the cards and accounts are accessible through your mobile device.

You can select Google Pay as a payment method when buying online, paying in person or settling up for in-app purchases, and you can also use Google Pay Send, a feature within the app, to send money to friends and family.

So what makes paying with mobile wallets like Google Pay contactless when you use it in-store?

When you’re making a purchase in person, you simply unlock your phone and hover it over the card reader to complete the payment transaction — there are no keypads to worry about and nothing else you’ll need to touch.

While there isn’t a payment system that’s 100 percent secure, Google has a wealth of expertise and experience in data protection: After all, collecting and storing information plays a big part in the tech giant’s phenomenal success.

As a form of security, Google Pay doesn’t store your actual card details on your phone. Instead, that information lives on Google’s secured servers and is strongly encrypted. This means even if your phone is stolen, thieves won’t be able to access your debit or credit card details. They could still make purchases if they can unlock your phone, of course, but you can strengthen your device’s security with pass code protection and biometric identification.

How to set up Google Pay

Setting up Google Pay is straightforward whether you’re using an iOS or Android device.

It’s important to note that iOS users will need to run iOS 7 or later to use Google Pay to send money to friends and family. Also, iOS users can’t use the app on their iPhones or iPads to pay in-store.

Here are the steps to setting up Google Pay:

The kind of payments you can make with Google Pay vary depending on where you live and the device you have. As mentioned, Google Pay for iOS is available only in the U.S. and India.

But Android users can use Google Pay to make contactless payments in 29 countries, including the U.S., U.K., Germany and Singapore. Bear in mind that for in-person purchases, the merchant has to support NFC or contactless payments, so check for the GPAY or NFC payment symbol at the store or use your app to find stores that accept this form of payment.

In addition, your bank or credit card issuer has to support Google Pay. Google has a long list of banks and other financial institutions that work with its payment platform, including most major banks and credit unions.

Another cool feature is that you can pay for train and bus travel with Google Pay in countries like Australia, Canada, India, Japan, Russia, Singapore, Ukraine, the U.K. and the U.S.

While there is no charge to send money to family and friends or buying with a debit card, Google Pay will charge 2.9 percent if you use a credit card.

Here are three top credit cards to use with Google Pay:

The Blue Cash Preferred is a great card to link to your Google Pay account because of its generous cash back rewards for purchases in family-friendly spending categories. While there is an annual fee of $95, you’ll be rewarded the following cash back rates:

A big advantage with this card is that you won’t have to enroll to earn these high cash back rates.

To sweeten the deal, there is a welcome bonus offer of $250 in statement credits if you spend $1,000 within the first three months. Add to that an offer of 0 percent intro APR on purchases for 12 months (then APR of 13.99 percent to 23.99 percent thereafter) and it’s clear the Blue Cash Preferred is a real winner for rewards on everyday purchases.

Chase Freedom Unlimited®: Best for simple cash back with no annual fee

If you value a simple rewards program you won’t have to think about, then Chase Freedom Unlimited is hard to beat. For starters, this card has no annual fee, so it won’t cost you to have it as long as you pay outstanding balances at the end of each month.

Here are some of its other benefits:

With Chase Freedom Unlimited, you can redeem your rewards for cash back, statement credits, gift cards, merchandise, experiences or even travel rewards. You can redeem conveniently through the Chase portal and your rewards won’t expire as long as your account remains open.

Continuing with the theme of no annual fee, the Citi Rewards+ Card deserves a place in your Google Pay account if you tend to make many smaller purchases.

The Citi Rewards+ extra features make it unique. For example, points get rounded up to the nearest 10 on every single purchase. So, if you buy a $3 coffee you’ll earn 10 points instead of three. For someone who makes small purchases frequently, points can add up quickly.

You’ll also receive 10 percent of points back for the first 100,000 ThankYou Points you redeem each year, so you’re rewarded for both earning and redeeming rewards.

Your Google Pay wallet is a good storage place

Just like your physical wallet, your Google Pay mobile wallet is a great place to store bits and pieces you’ll need while on the go. It can make your travel virtually paper-free.

For example, you can store rail passes in your Google Pay mobile wallet so all you have to do to board the train is hold your smartphone near enough to the reader at the fare gate.

You can also use your mobile wallet to store digital loyalty cards, gift cards, flights, event tickets and boarding passes.

You can send and receive money with Google Pay

In the U.S. and India, you can also use this digital platform to send or request money without incurring extra fees.

This functionality, however, was developed primarily for money transfers between family and friends. You can send up to $10,000 in a single transaction or over seven days. Florida residents can send $3,000 every 24 hours. If your recipient doesn’t use Google Pay and fails to claim the money within 14 days, your money will be returned to you.

How Google Pay stacks up to other mobile wallets

Aside from Google Pay, there are several other mobile wallets you can consider — Apple Pay, Samsung Pay, Chase Pay, PayPal and Venmo are just a few other well-known providers.

If you’re deciding between these two platforms, your choice will likely be determined by which device you own. While iOS users can use the Google Pay app to transfer money between friends and family, Apple Pay can be used only on Apple devices.

Google Pay also has advanced security features that include multi-layer encryption and you can link your PayPal account to Google Pay — a feature not available on Apple Pay.

We’ve taken a close look at Google Pay — what it is, how to use it, what you can use it for and how secure the platform is. When it comes down to it, we like what we see.

The platform features multiple layers of security, is widely accepted by retailers and extremely easy to set up. It delivers convenience and it really is as good as a physical wallet in terms of keeping cards as well as other important bits and pieces in one place.

With many shoppers worried about the hygiene of giving and receiving money, it’s likely that mobile wallet adoption will continue to grow. If you’re thinking about setting up a mobile wallet, then Google Pay is definitely a top choice — especially if you’ve got an Android handset. Just make sure not to use a credit card as a payment source if you want to avoid fees.