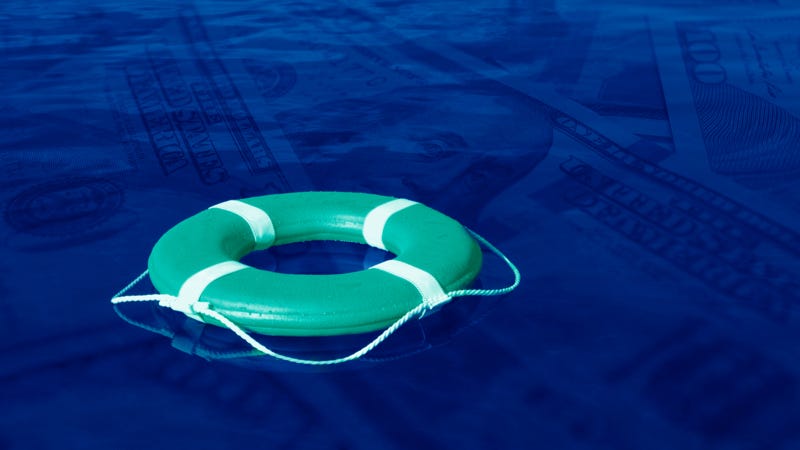 Many of us would be in trouble if we had to foot the bill for an unplanned expense.

Bankrate’s January Financial Security Index survey reveals that just four in 10 U.S. adults (41 percent) would cover the cost of a $1,000 car repair or emergency room visit using savings. The findings echo what previous Bankrate studies and others — including the Federal Reserve and the Pew Charitable Trusts — have found about Americans’ lack of rainy-day savings.

The higher your household income, the more likely you would be to use savings to pay for unanticipated costs. That’s true for nearly six in 10 (59 percent) households earning $75,000 or more annually.

Men (45 percent) were more likely than women (38 percent) to say they would draw from savings when faced with the unexpected. And when their backs are against the wall, just 36 percent of younger millennials would turn to emergency funds to pay $1,000 (compared with 41 to 44 percent of older folks who would say the same).

[READ: Americans divided on whether to credit Trump with strong economy]

Coping with the unexpected 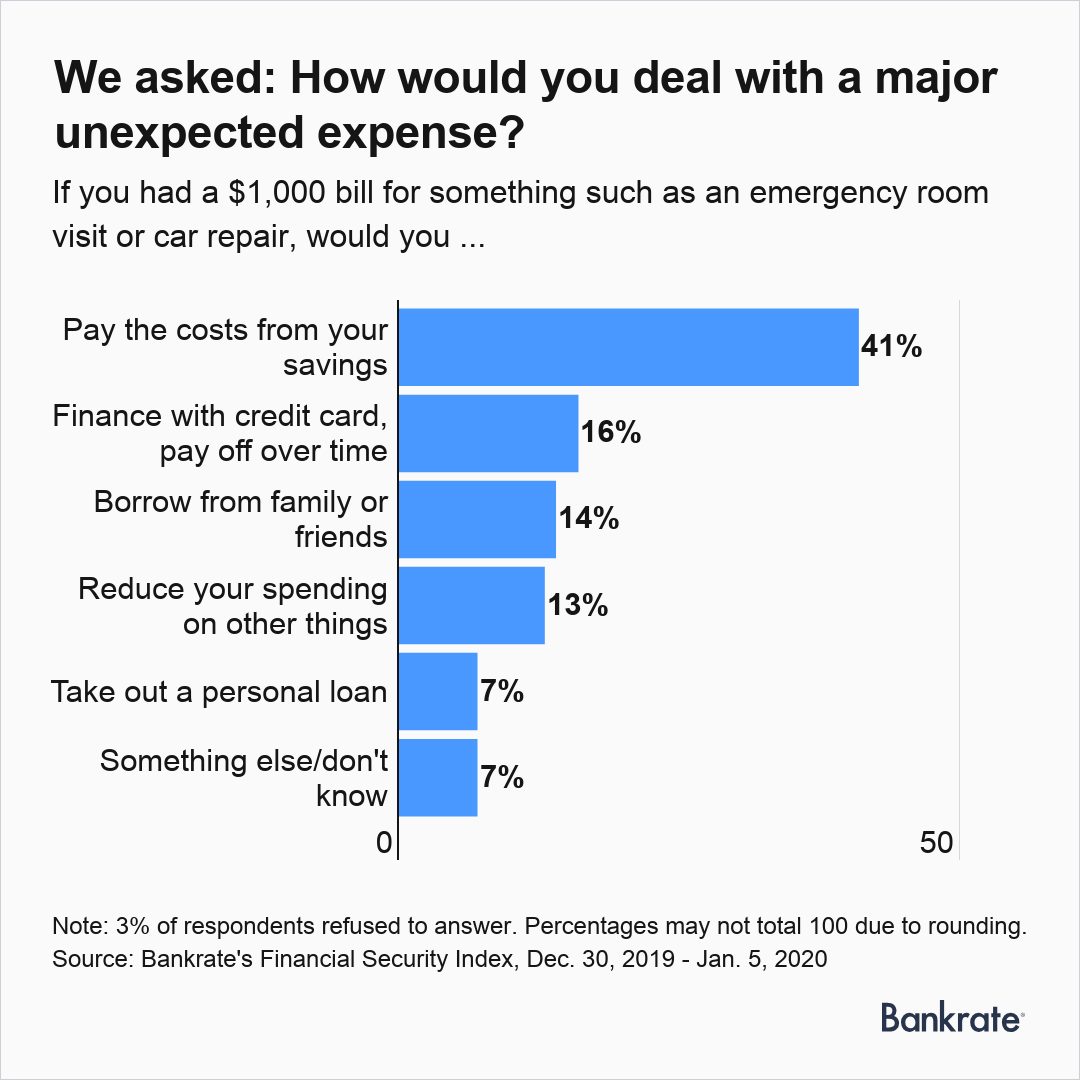 When in a pinch, those who lack emergency savings turn to other methods to make ends meet.

[READ: The best (and worst) states to retire in]

Overall, for adults without enough savings to cover a $1,000 emergency, the most common alternative is using a credit card. That was the preferred payment method for 16 percent of Americans. Going into debt to deal with a rainy day can get expensive.

“But this comes at a high cost, as the average $3,500 expense financed at the national average credit card rate of 17 percent would require monthly payments of $125, taking three years to pay off and incurring nearly $1,000 in finance charges,” says Greg McBride, CFA, Bankrate chief financial analyst. “Whatever savings you can accumulate acts as a buffer from high-cost debt when unplanned expenses arise.”

More than one in four U.S. adults (28 percent) report that they or an immediate family member had major unplanned expenses within the last 12 months.

Of course, there’s no telling who will find themselves needing to replace a dying car engine or rush a child to the hospital in an emergency.

The Pew Charitable Trusts, which has released reports on financial shocks in recent years, notes that just one can have a lasting impact on a household. Depending on income level, a single financial shock “can create a ripple effect,” says Pew’s financial security and mobility project manager, Karen Kavanaugh. “In other words, one shock may lead to another as a family tries to recover.”

The high cost of emergency expenses 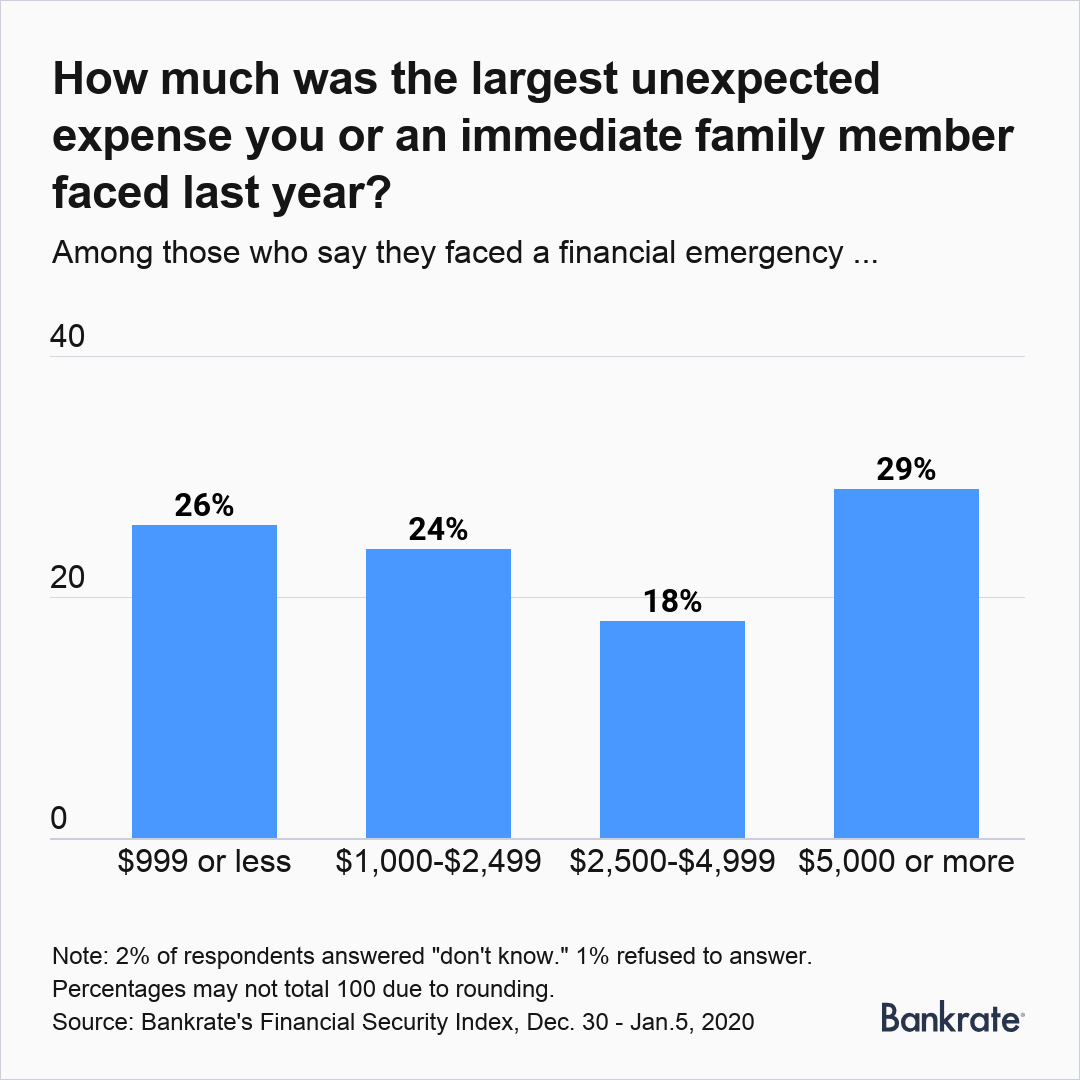 Emergencies often aren’t cheap. Among survey respondents who said they or their family members dealt with an unexpected expense in the past 12 months, the median amount of the largest expense was $1,750.

Three in 10 adults (29 percent) said they or their family members spent at least $5,000 in the past year to cover an unanticipated cost. Nearly one-third (32 percent) of the lowest earners spent $5,000 or more compared with 28 percent of the highest-earning households.

“Much of this is attributable to lower monthly expenses,” McBride says. “If you’re renting a place with two roommates within walking distance from work, you’ll generally have a lower exposure to big unplanned expenses than the middle-aged homeowner that gets a flat tire, has a water heater go out, or finds out the kids need braces.”

Preparing for the worst

Even as the economy has improved over time, Americans haven’t gotten any better at saving.

“High household expenses and stagnant income can put limits on how much you can save,” McBride says. “But the main reason is that saving just isn’t a high enough priority that households will cut back on spending or automate the savings in order to make it happen. The first step is the most important.”

Companies like Prudential Financial have begun offering employees access to sidecar savings accounts, giving them the opportunity to set aside funds for emergencies in addition to saving for retirement through a 401(k) or another employer-sponsored account. In the absence of such programs for many other workers, however, most Americans must take it upon themselves to adequately save for the unexpected.

This comes down to getting into the habit of saving, McBride says.

“Establishing the habit via direct deposit from your paycheck or automatic transfer from checking into savings is critically important, especially if you’re starting from a position of little or no savings,” McBride says. “If you wait until the end of the month and try to save what is left over, too often there is nothing left over. Becoming a good saver isn’t just a switch that you flip one day.”

Cutting back on spending — which 13 percent of Americans are doing when faced with unexpected expenses — is also an option for families hoping to quickly grow the emergency fund in their savings account. Bryan Bibbo, lead adviser with The JL Smith Group in Avon, Ohio, recommends eliminating unnecessary costs by taking simple steps like negotiating utilities, shopping at more-affordable grocery stores and shopping around for insurance.

“Find ways to save money across the board,” Bibbo adds. “The idea here is to not make major changes in every aspect of your life, but instead to make minor changes that will save a few bucks that when totaled will come out to a decent amount saved.”

This study was conducted for Bankrate via telephone by SSRS on its Omnibus survey platform. The SSRS Omnibus is a national, weekly, dual-frame bilingual telephone survey. Interviews were conducted from December 30, 2019 to January 5, 2020 among a sample of 1,015 respondents in English (980) and Spanish (35). Telephone interviews were conducted by landline (307) and cell phone (708, including 470 without a landline phone). The margin of error for total respondents is +/-3.39% at the 95% confidence level.  All SSRS Omnibus data are weighted to represent the target population.