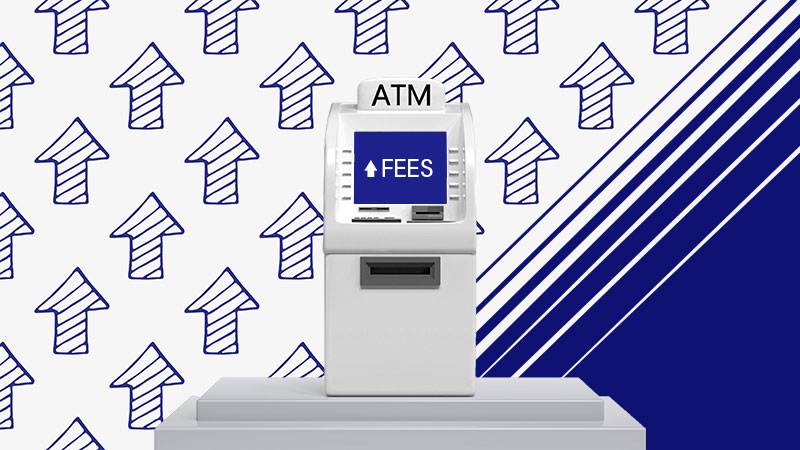 Interest rates may be heading down, but bank fees are still moving in only one direction: up.

The average overdraft fee is $33.36, according to Bankrate’s 2019 checking account and ATM fee study. That’s slightly higher than it was last year and close to where it was in 2017 when it peaked within a period of two decades.

The cost of using out-of-network ATMs is increasing as well. Total ATM fees, on average, are getting closer to $5 a pop. But consumers are going the distance to avoid these charges. According to a recent report from Mercator Advisory Group, more than three-quarters of consumers say they do anything they can to dodge ATM surcharges. Fortunately, getting around these fees and others associated with checking accounts isn’t too difficult.

Bankrate surveyed 10 banks and thrifts in 25 large U.S. markets. We gathered information about interest-bearing and non-interest-bearing checking accounts and details regarding ATM and debit card fee policies. Below are the highlights from our study.

On average, the cost of withdrawing more money than you have in your account is a bit higher than it was in 2018. Still, you can commonly expect to be charged a bit more — around $35 — for a single overdraft.

Depending on the bank or credit union you choose, you could pay more for ending up in the red. And it’s possible to get hit with several overdraft charges in a single day.

Frustration over hefty overdraft fees has led to legal attempts to ban them in certain circumstances and resulted in the creation of apps and banking alternatives that don’t charge customers for overdrawing their accounts.

Quite a few banks charge customers for keeping their accounts open, especially if they fail to meet a minimum balance requirement.

For checking accounts paying interest, the average minimum balance requirement climbed to $7,123, the highest it’s been in two decades. To avoid monthly fees with a non-interest-bearing checking account, customers must keep less than one-tenth of that amount in their account (about $622, on average).

Minimum deposits for checking accounts are also climbing. The average minimum needed to open a non-interest checking account has increased by about 1.4 percent in the past year to $162.94.

Now that more checking accounts are “free” (meaning they have no monthly service fees or balance requirements), you may be better off opting for an account that doesn’t require you to deposit too much money and opening a high-yield savings account or money market account.

About 4 in 10 non-interest checking accounts (42 percent) are considered free, the highest percentage since 2011.

If you’re using an ATM outside of your bank’s network, expect to get hit with two fees: a surcharge from the owner of the ATM and a fee from your own bank or credit union.

ATM surcharges, on average, cost customers $3.09. And your bank will charge you around $1.63 to use someone else’s ATM. In total, charges for using the wrong ATM can cost you an average of $4.72. But with so many surcharge-free options available, consumers aren’t necessarily paying that much.

“I think what may be happening is that the owners and operators of the ATMs who are relying on the surcharge income to operate those ATMs may be seeing fewer customers,” says Sarah Grotta, director of debit and alternative products of advisory service at the Mercator Advisory Group. “And so on a per-transaction basis, they may be raising the fees to make up for the fact that fewer consumers are actually paying a surcharge.”

Of course, how much you’re charged at the ATM depends on where you live. Residents in cities like Houston and Atlanta pay significantly more for using out-of-network ATMs than some of their counterparts on the West Coast.

While having a checking account isn’t getting cheaper, the good news is that fees are typically easy to bypass. Instead of visiting an out-of-network ATM, for example, you can avoid additional charges by asking for cash back when shopping for groceries. Looking at accounts offered by credit unions and smaller banks could also work in your favor, since they tend to have more ATMs available than bigger banks, says Greg McBride, CFA, Bankrate chief financial analyst.

Dodging fees also comes down to just paying more attention to your account balances. If you have a tendency to overdraw your account, consider getting an account offered by a non-traditional bank.

“An increasing number of fintech companies and neobanks are offering accounts that do not charge overdrafts, and are worth considering for those with more than the occasional overdraft,” McBride says.

Correction: An earlier version of this story referred to the average ATM surcharge as reaching a 15-year high rather than a record high for the 15th consecutive year. It also misstated in a reference that the average ATM fee from your own bank or credit union had increased from last year.