Dear Tax Talk,
I had a charge-off that was apparently reported to the Internal Revenue Service in 2010. In April 2012 I paid back approximately half of this debt. In July 2012 I was informed that I owed the IRS extra tax for 2010 because of this income. I sent them a copy of the receipt to try and get the amount reduced by half, as half had since been paid; therefore it’s not income. They were not impressed and are still after me for the full amount. Will I be able to deduct the paid portion on my 2012 taxes? How can I resolve this tax bill dispute with the IRS?
— Ken

Dear Ken,
There are various defenses to fight this tax bill battle, but your best bet would be to hire an accountant to represent you so that you prevail in this matter. If I understand you right, you owed someone, let’s say, a bank, money that you did not repay in 2010. The bank charged this off as an uncollectible account and issued you a Form 1099. It sounds like you didn’t include this debt in your 2010 taxes and the IRS probably sent you a correspondence exam letter, known as a CP2000, asking why you didn’t record this as income.

For some unknown reason you paid off half of this debt in 2012 and you believe that you shouldn’t have to pay tax in 2010 on this debt. I agree with you, the IRS is not seeing it right. Your defenses would be:

Good luck and let me know how things turn out.

Tax debt relief: How to resolve your debt with the IRS

Can’t pay the IRS what you owe? 4 ways to avoid major penalties 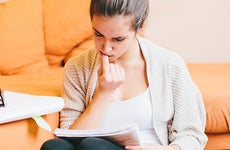 What to do about an IRS notice on taxes due

How to prove income with no tax return