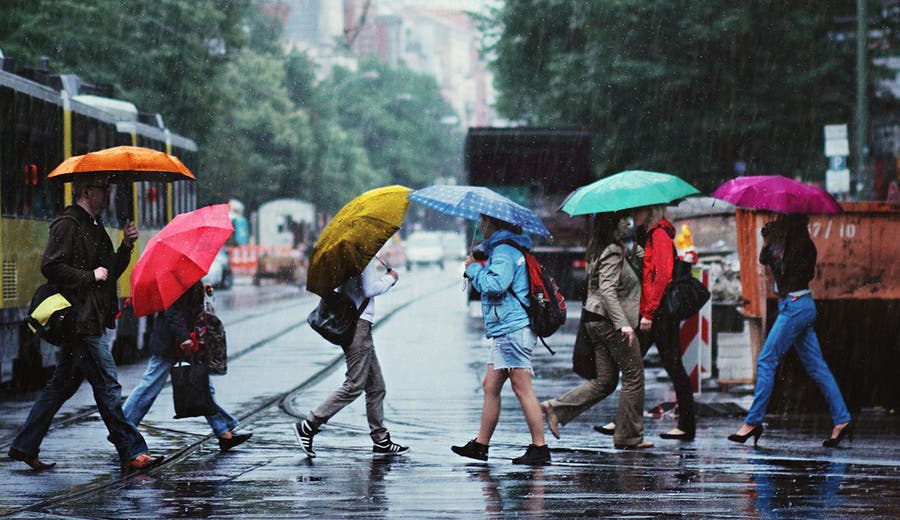 On the list of issues we struggle with as a nation, saving money is near the top.

More than 1 in 5 working Americans aren’t saving any money for retirement, emergencies or other financial goals, according to Bankrate’s March Financial Security Index survey. The survey was conducted for Bankrate by SSRS, who interviewed 1,003 respondents via telephone.

To most experts, that’s not a surprise. And over time, we’ve made little progress toward addressing this problem.

“This result has shown little change over the past few years, consistently coming in at 20 percent or 21 percent since 2016,” says Greg McBride, CFA, Bankrate chief financial analyst. “Unfortunately, this means it hasn’t improved.” 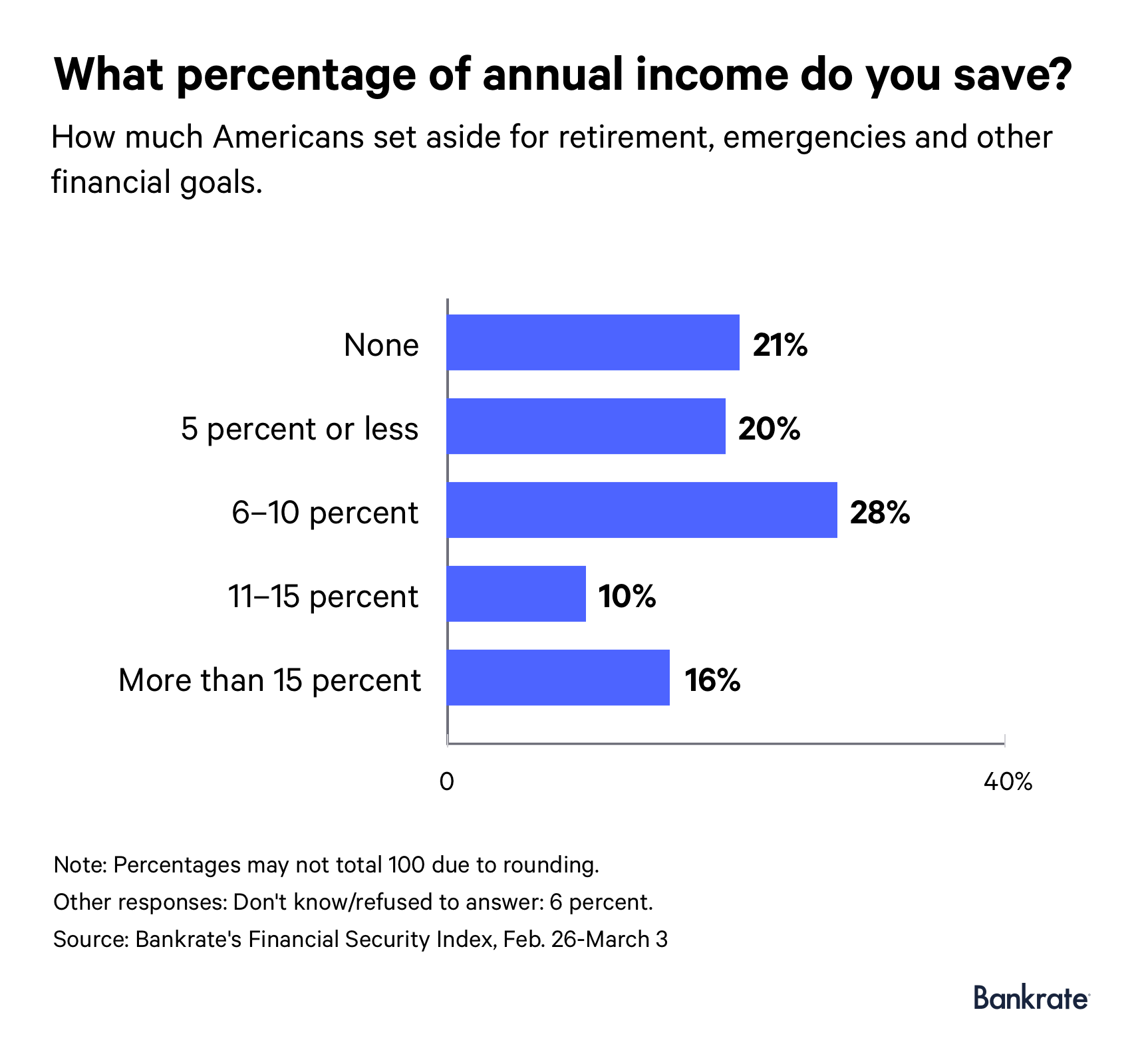 Who is (and isn’t) saving

Compared with their wealthier counterparts, low-income working Americans are more likely to say they struggle when it comes to saving money.

More than 4 in 10 households (45 percent) earning less than $30,000 per year aren’t saving any money. That’s the case for about 6 percent of the highest-earning households.

Men are more likely than women to say they’re saving more than 15 percent of their income. About 1 in 5 males and 13 percent of females fall into that category.

There’s also a generational divide between who’s socking away more money. Older households (age 55 and above) are more likely than other age groups to be saving more than 10 percent of their annual income. Millennials and Gen Xers, on the other hand, are more likely to say they’re not saving any money at all (or they’re not saving more than 10 percent of their income).

The survey results may highlight some of the financial challenges millennials face that make saving money difficult, like student loan debt, the lack of wage growth and the increased cost of essentials, says Douglas Boneparth, president of Bone Fide Wealth and co-author of “The Millennial Money Fix.”

“There’s also greater pressures to spend,” Boneparth says. “You can’t ignore that we live in a consumerism kind of society that’s being amplified by things like social media.”

Gen Xers are in a similar financial boat.

“I think Gen X has even greater responsibilities than millennials do, specifically when you think about college savings and expenses like that,” Boneparth adds.

Why we aren’t saving

According to the survey, 38 percent of working Americans have too many expenses. Across different income levels, age groups and regions, that’s the most common reason we aren’t saving more money.

But are people aware of where their hard-earned money is going or are they spending it mindlessly? A 2018 Bankrate survey about financial vices found that the average American spends more than $2,900 a year on restaurant food, takeout meals, prepared drinks and lottery tickets.

“I wonder how many of them really scrutinize what they’re spending their money on,” says Nancy Wong, professor and chair of the department of consumer science at the University of Wisconsin-Madison. “And a lot of the times, like what most I think financial consultants would say, it’s actually the little things that add up.” 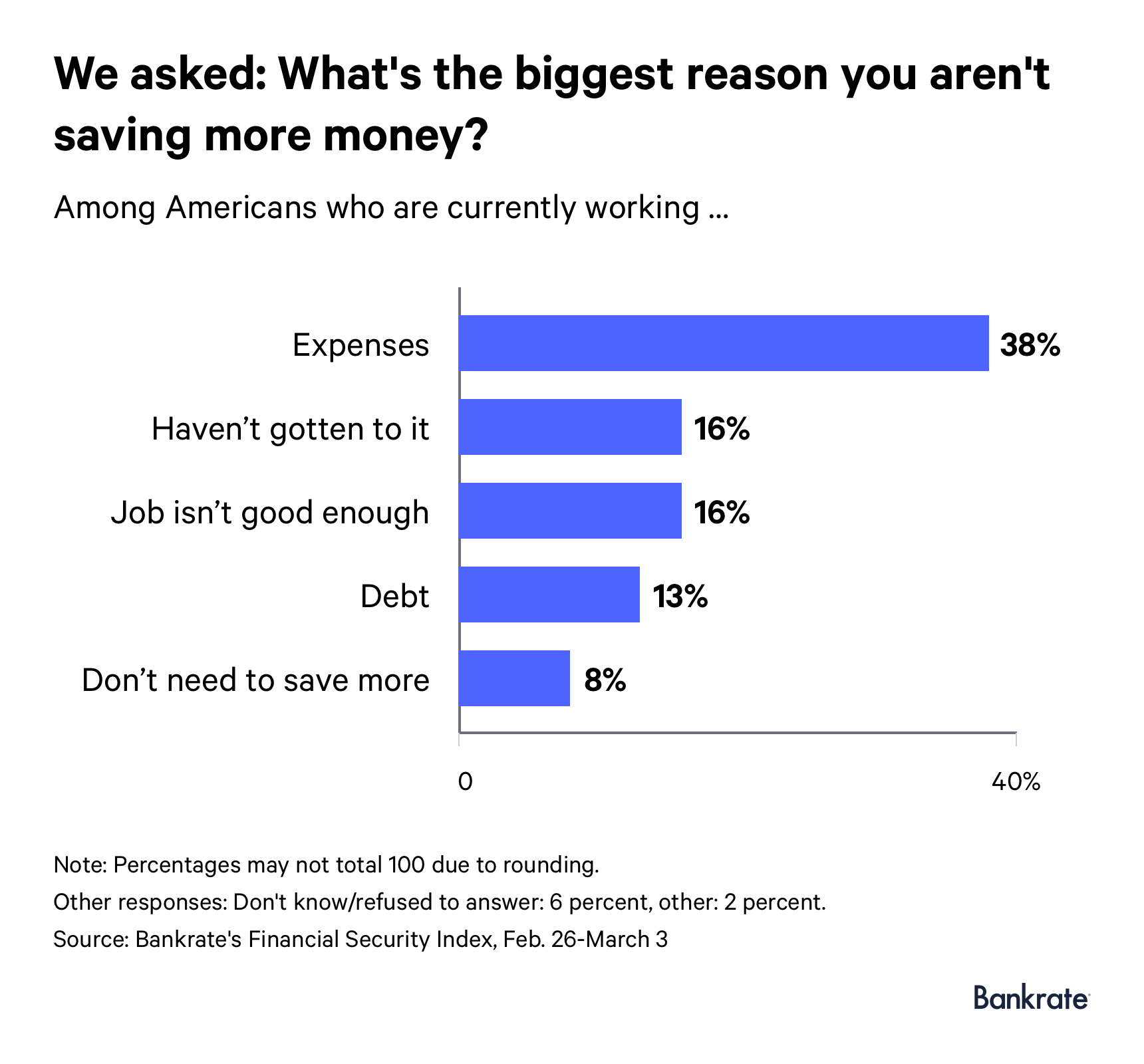 Some Americans (16 percent) say they just haven’t gotten around to setting any money aside. Twenty-two percent of millennials feel this way.

“Saying you haven’t gotten around to it is a lousy excuse,” McBride says. “Having money tucked away for unplanned expenses and actively saving for your retirement are too important not to prioritize.”

Low-income Americans living paycheck to paycheck may realistically have nothing to save. For these families, finding ways to earn extra money may be more effective.

“I don’t want to come off as that person who’s like, ‘Oh yeah, just go work a second job,'” Boneparth says. “But there are things you can do. You can work more jobs. You can side hustle. You can ask for a raise.”

How much you should save

Financial advisers, for the most part, recommend transferring at least 15 percent of your income into a savings account.

But how much you should save for retirement or a rainy day will vary depending on different factors, including your income level and financial situation.

Wong says it’s probably best to have a specific amount of money you’re planning to save instead of striving to put away a percentage of your income.

“There is also research that shows that because percentages are relative terms, right? And it doesn’t feel very concrete because what exactly is 10 percent? Depending on your level of income, 10 percent would be very different for each individual,” Wong says.

How to save more

Saving more money begins with ensuring your funds are in a high-yield savings account or CD. You may also need to make some significant changes to your lifestyle.
“If high monthly expenses are the culprit for why you’re not saving more, you have two options: Boost your income or cut your expenses,” McBride says. “Either way, it is going to take sacrifice and some tough decisions – but the financial security and peace of mind are well worth it.”
But Wong says we make a mistake by tying the act of saving money to specific goals.

“Goals tend to be in the future, and they are also less concrete. And then you sort of like work yourself backwards, because it doesn’t actually transcribe into what you do on a daily basis or on a regular basis,” Wong says. “You have to rely on discipline and self-control and stay within your budget in order to reach that goal.”

Instead, she recommends incorporating saving money into your daily routine and turning it into a regular habit.

“If you’d like to buy that cup of cappuccino or something, each time you buy you have to promise to put a dollar away,” Wong says.

Turning the act of saving money into something that happens automatically can also work well for many people.

“The most effective method to save more money is to do so automatically,” McBride says. “Set up payroll deductions that go directly from your paycheck into a dedicated online savings account for emergency savings and a workplace retirement plan or an IRA for retirement savings. Save it before you get the chance to spend it.”

Whatever route you decide to take, just know that now is the time to make saving money a priority. Most business economists predict we’ll face a recession by 2021.

“The labor market is the tightest it has been in 50 years, and the wage growth is the highest in a decade,” McBride says. “Now is the time to make hay while the sun shines and put some money away for when things aren’t so good.”

This study was conducted for Bankrate via telephone by SSRS on its Omnibus survey platform. The SSRS Omnibus is a national, weekly, dual-frame bilingual telephone survey. Interviews were conducted from Feb. 26-March 3, 2019, among a sample of 1,003 respondents in English (965) and Spanish (38). Telephone interviews were conducted by landline (401) and cellphone (602, including 410 without a landline phone). The margin of error for total employed respondents (546) is +/-4.68% at the 95% confidence level. All SSRS Omnibus data are weighted to represent the target population.