Being a homeowner requires a long-term commitment to a home and the community that surrounds it.

There’s also the mortgage, though how long you’re attached to it is entirely up to you.

Take Elisabeth Thomas, for example. She and her husband paid off their 30-year fixed-rate mortgage — with an interest rate of about 3.9% and a $204,000 original loan amount — less than 3 years after their home purchase.

The first-time homeowners live in a single-family home in the Tampa, Florida, area that they purchased in June 2012. After a couple of years of making their monthly principal and interest payments the traditional way, they consulted a financial adviser.

More On Paying A Mortgage Early:

He reviewed all of their debts and savings vehicles, including retirement accounts, and concluded that paying off the mortgage would better suit their situation than investing the money elsewhere.

“And the next week, we went to the bank and paid it off,” says Thomas, who is the founder of Launch Product Marketing, a marketing firm. That was February 2015.

Thomas says she and her husband were able to pay a lump sum and quickly get rid of their mortgage because they’re both lifelong supersavers.

“We’ve been taught the value of a dollar and we’ve always saved our money,” she says.

They apply the age-old “needs versus wants” mentality to their household spending, which ended up helping them greatly when they chose to pay off their mortgage.

“Since we made the decision to pay off the mortgage, we’re very happy.”

Maureen Welsh, public relations director at 401(k) robo-adviser Blooom, and her husband bought their Overland Park, Kansas, home in 2010. They got a 30-year fixed-rate mortgage for $200,000 and their interest rate was somewhere around the high 3s to low 4s.

It’s their second homeownership adventure, and they’re determined to wipe out their mortgage as fast as they can.

“Our goal is actually to have it paid off before our oldest (child) goes into high school, which is in 2 years,” Welsh says.

To pay off their home loan more than 2 decades ahead of schedule, the game plan is designating any windfalls they get — bonuses, tax refunds, etc. — to the mortgage as principal-only payments. Additionally, the couple lives off just 1 of their 2 income streams.

They usually make extra payments on the mortgage of $1,000 to $2,000, though that has been put on hold to pay off a home equity line of credit they took out for home improvements.

“That’s kind of diverted some of our extra mortgage payments,” Welsh says.

They expect to have their HELOC paid in full in months and will immediately resume their aggressive strategy for tackling the mortgage.

So far their loan balance is down to about $138,000. They have a debt thermometer posted in their home office to keep track of their progress. 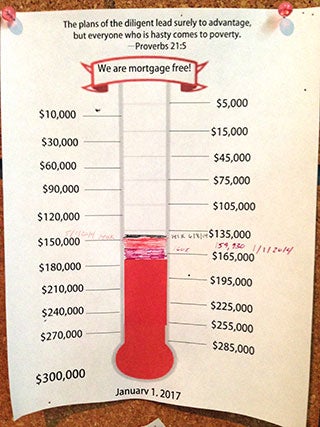 Marry yourself to becoming mortgage-free

Paying off your mortgage years ahead of schedule requires a huge commitment.

For instance, just as you “pay yourself first” by funding your savings account on paydays, you should give your home loan the same treatment, Welsh advises.

“Do that first instead of saying, ‘Well, whatever we have left over at the end of the month we’ll put toward the mortgage,'” she says. “That will get you in trouble because everything is going to seem more important than paying off your 30-year mortgage.”

Most importantly, don’t get overwhelmed by the size of your loan.

“It’s kind of like someone who needs to lose 300 pounds; you’re not going to do it all in 1 month or even a year,” Welsh says. “Just try and stay motivated.”