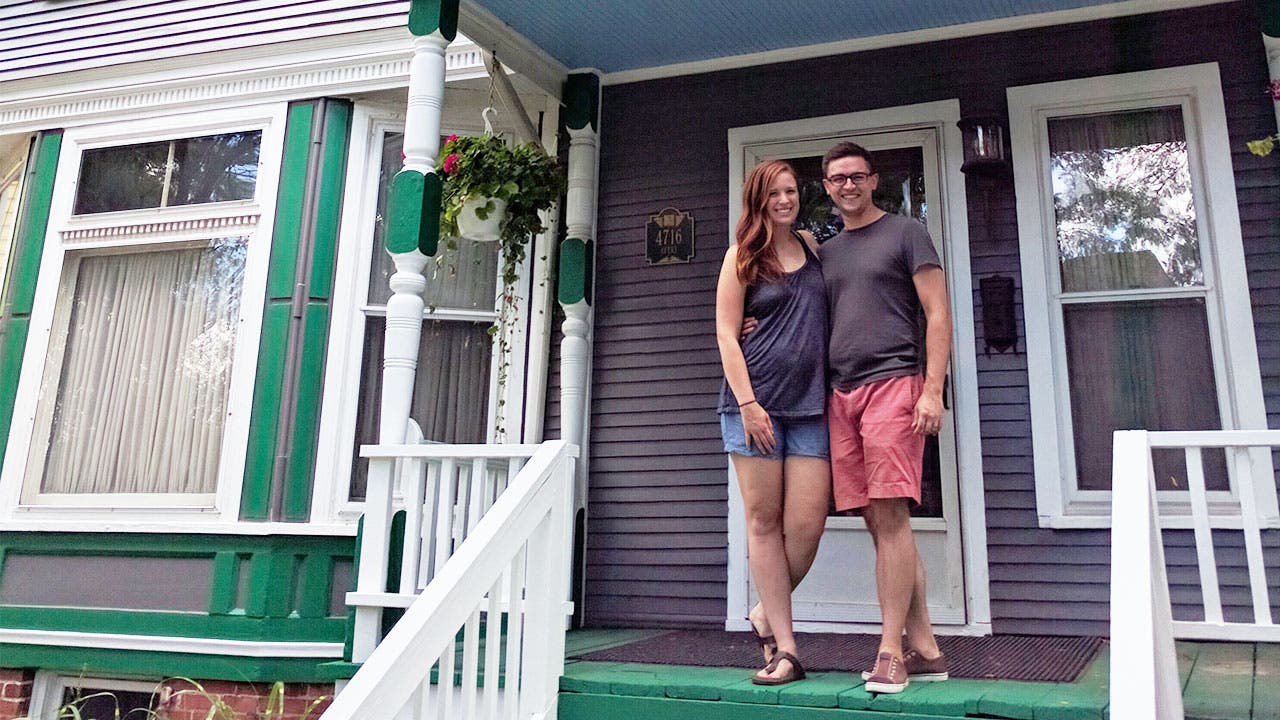 Married couple Kris Knowles and Jen Knowles are moving across the country from Seattle to Detroit. After seven years of living in the Emerald City, they’re leaving because of the high cost of living.

“We both have student debt and other debt we’re paying off. We make a lot on paper but it’s not much in Seattle. If we want to buy here we would have to make double what we’re making or move an hour outside of the city,” says Jen, a physical therapist.

In Seattle, the couple faced average home prices of about $720,000, according to Redfin, a real estate brokerage. But the reality was that houses in the city were closer to $1 million, says Jen.

By moving to Detroit the couple estimates they can save about $12,000 in one year to put toward a home, which would cost a fraction of what they would pay in Seattle. Their budget is $250,000 for a 3- to 4-bedroom house, which is extremely doable in a city where the average home value is $38,000, according to Redfin.

“When we looked at the numbers it just made sense. We didn’t want to have to move an hour away from work in order to afford a house. The whole reason we moved to Seattle was to be in Seattle, not in the suburbs,” Jen says. “After visiting family in Detroit a few times, we were really pleasantly surprised.”

Lots of folks are surprised about Detroit, long a symbol of urban decay. Moving to Detroit in search of the American dream is no longer an unusual story. For a city that saw a dramatic drop in population, from its peak of 1.8 million in 1950 to 673,000 people today, the fact that businesses and people are moving back is testimony to its resilience, says 29-year old Andy Cisler, a data analyst at Bankrate.

“I think Detroit is super unique in that everyone very much wants to take ownership. People feel like this is their city. It’s big enough to matter in the world and small enough for individuals to make a difference. People here want to make an impact,” Cisler says.

Something for everyone in Detroit’s housing market

Awash with businesses, breweries, upscale restaurants, art galleries and music venues, downtown Detroit is alive — which is why, according to Justin Robinson, vice president of economic development at the Detroit Regional Chamber, there’s a 98 percent housing occupancy rate there.

“The greater downtown has undergone a tremendous revitalization. Prices in that area have gone up significantly,” says Robinson. “Office buildings are being converted into residential and even those apartments are seeing some appreciation. There are about 6,000 new units, so an enormous amount of construction is taking place.”

Downtown isn’t the only area that’s seeing growth. West Village, East Riverfront, North End and Southwest Detroit are just a few neighborhoods that are primed for major changes, according to Robinson.

Robinson estimates that about a dozen neighborhoods stayed intact during the downturn, creating opportunity today for homebuyers to get a house at a reasonable price.

Detroit’s millennial population grew by 10.4 percent in 2018, ranking fourth in growth among tech talent markets with labor pools of more than 50,000, according to CBRE Inc.’s annual Scoring Tech Talent report.

“A lot of people under 40, who want to live in cities, are moving here. They don’t have to drive if they don’t want to. You can take our new streetcar, the Qline, which runs down Woodward Avenue through downtown,” says Robert Tesh, marketing director for Downtown Realty.

Corporations are betting on Detroit

Detroit is not only attracting people who want an affordable urban experience, but it’s also bringing in big names from corporate America. Companies are investing billions of dollars on a town they see as making a comeback.

Last year, Google moved to a 29,000 square-foot-office in downtown Detroit. Microsoft opened a regional office there last year, occupying 50,000-square-feet of office space, while Linkedin has a 74,000-square-foot office in the historic Sanders building. Amazon also has an office there, where more than 100 tech and sales employees work, while mortgage giant Quicken Loans is headquartered downtown.

Recently, Ford purchased the historic Michigan Central Station in Corktown, a trendy area just west of downtown. The 1.2 million square-foot space will be home to mixed-use office, retail, and residential, according to a statement by Ford. The company estimates about 2,500 Ford employees will be based there by 2022 while an additional 2,500 workers from other companies will work out of that space.

“At a conference I attended last month, Ford said they’re making it like a smart corridor,” says Tesh. “They’re putting all this infrastructure in and they’re going to test electric and automated vehicles there. They’ve got a lot of plans. You figure 5,000 jobs in Corktown alone, that’s 15,000 people or more when you factor in spouses and kids.”

Dan Gilbert, founder of Quicken Loans, Rock Ventures and chairman of the Cleveland Cavaliers, is also rolling the dice on Detroit. The entrepreneur has invested billions on reviving the Motor City. He owns more than 90 downtown properties, including the historic Detroit Free Press Building, which is currently undergoing a $70 million renovation.

“Detroit is capturing the imagination of people,” Robinson says. “You’ve got about 150,000 people employed and 350 operating retail spaces in greater downtown. Virtually every week there’s a new bar or restaurant. It’s really starting to fill in the city.”

Revitalization is not evenly distributed

To be sure, not all of Detroit is on the rebound. There are still neighborhoods that are dealing with high crime and urban blight.

“There are large sections of this city where a lot of folks have left and moved to the suburbs,” Robinson laments. “When 1 million people leave your city, this is what happens. Entire city blocks become empty over time. You might see streets where 80 percent of the homes are still there or just one or two homes are there. That’s the juxtaposition you see in this city.”

Between 2000 and 2010, Detroit lost 25 percent of its population, about 237,500 people. Many long-time Detroiters lost all the equity in their homes when people fled for the suburbs, leaving houses abandoned to squatters, copper scrappers and arsonists. Now many of these folks are wondering when progress is coming to their neighborhoods.

Rose Patterson, a 65-year old retired schoolteacher and native Detroiter, lives in Brightmoor, one of the most blighted neighborhoods in Detroit. She says she’s happy there’s finally momentum in her city, but she wonders when it will reach her neighborhood.

“In my neighborhood, there’s no major supermarket. The government allowed Section 8 to move in and people just couldn’t afford to take care of their homes,” says Patterson. “What happened is that our homes dropped in value so we couldn’t sell them. I don’t see improvement in my neighborhood yet.”

The city of Detroit and private corporations are working to fight blight through a number of programs. For example, The Detroit Land Bank Authority is helping locals find affordable housing by selling houses that have been abandoned or foreclosed upon. They’re the largest landowners in Detroit, with about 90,000 of Detroit’s 380,000 parcels under their control.

Quicken Loans has partnered with Detroit Land Bank and Home Depot to execute their Rehabbed & Ready Program. This helps existing homeowners recover some of the equity they lost and offer rehabbed homes to residents at an affordable price.

Many of Detroit’s struggling neighborhoods suffer from appraisal gaps, largely due to the tax foreclosure system in place, says Laura Grannemann, vice president of strategic investments at Quicken Loans.

This has led to stark contrasts between home values of similar stock separated by the city’s border.

“In many cases on one side of the Detroit border a home is worth $170,000 and once you get into Detroit it’s worth $40,000. So we’ll do strategic rehab of homes in those neighborhoods in order to stabilize those values,” Grannemann says.

One hundred homes in 12 neighborhoods have been rehabbed through this program, with all the mechanical, electrical and plumbing components updated. Homes that are chosen for the program are not so blighted that it costs hundreds of thousands to rehab the property, Grannemann says.

“These are homes that are strategically placed, where one comparable will make a big difference in that neighborhood. In other words, if we can sell a property for $100,000 it will have a ripple effect across the community. Neighbors two blocks away can then use that comparable to value their home and make sure they’re getting the equity they deserve out of that home.”

For people like Patterson, who have lived through Detroit’s heyday and have seen its decline, it’s good to finally see the city transform, although there’s still much to be done.

“When I moved here the homes were simply beautiful. These were homes with large backyards and spacious rooms. These were three-bedroom brick homes. People had money to put in beautiful fixtures. The death of Detroit was sneaky. It just crept up on us. Some people complain that they’re not helping everyone out. But, I tell them they have to make downtown good so that people will want to come. I think it’ll get better,” Patterson says.

This story is part of a Bankrate series on American cities that have a combination of job expansion and affordable housing.