You earned how much?! A brief history of CD rates 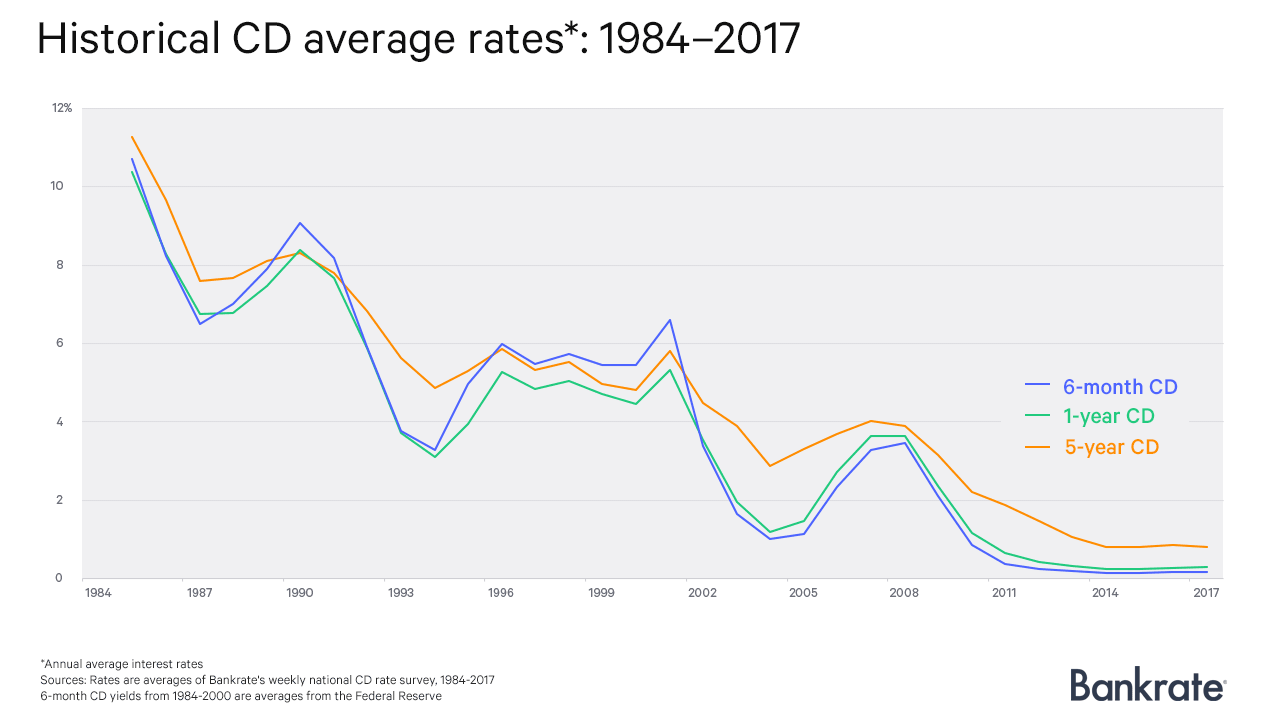 The rise and fall of CD yields

Decades ago, average CD yields exceeded 10 percent APY. You won’t find a return anywhere close to that today. In fact, the average 1-year CD pays just 0.4 percent, according to Bankrate’s most recent national survey of banks and thrifts.

The downside to high CD rates? That’s an indication that inflation is high, as well, and your savings aren’t as valuable as you think.

Here’s a look at the historical ups and downs of CD rates and what yields could look like in the future. Compare current rates now to grow your savings. 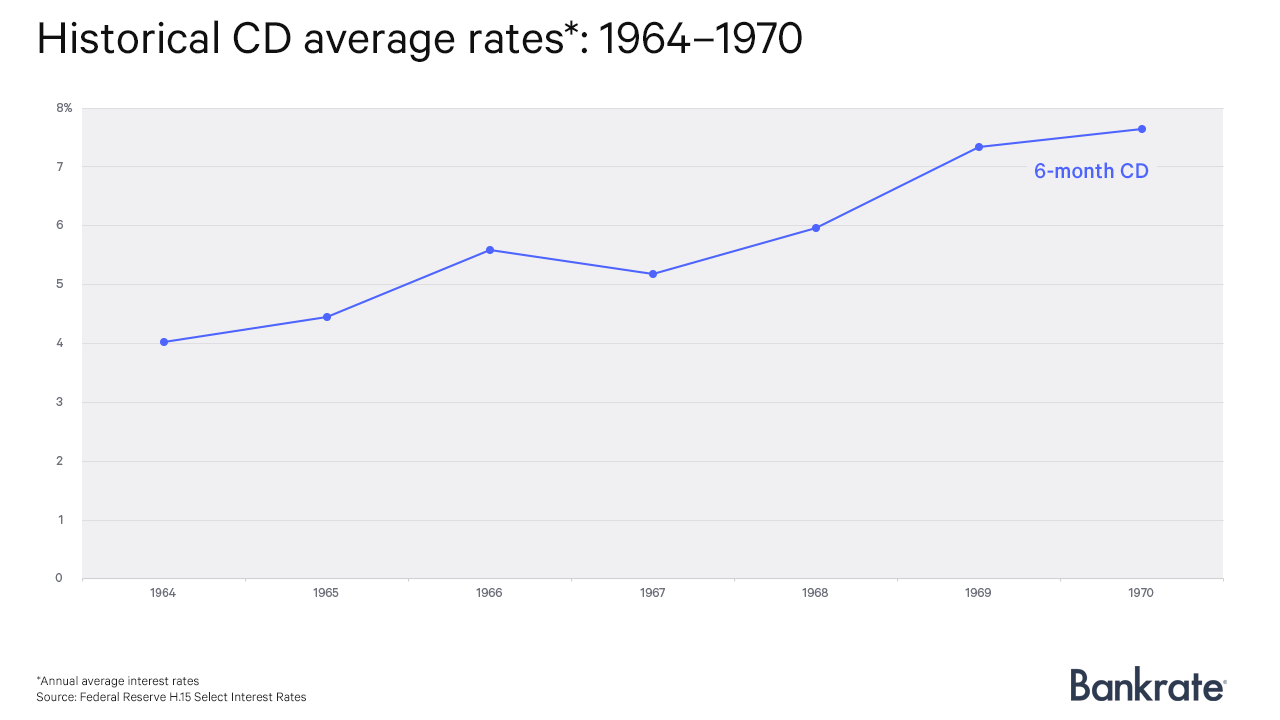 Back then — more than a decade after World War II — countries around the world watched their economies boom.

“The 60s themselves were a time period of expansion, and it was the beginning of our ramping up of the Vietnam War,” says Steve Swidler, a professor in the finance department at Auburn University.

In the mid-1960s, consumers looking to buy a 6-month CD could expect to find rates between 4 and 5 percent APY, according to data from the Federal Reserve. Soon thereafter, rates began to rise.

“Those sort of controlled rates went away when you saw the volatility that really started in the late ’70s and ’80s,” says Ted Beck, president and CEO of the National Endowment for Financial Education.

Calculate how much interest you could earn with a CD today. 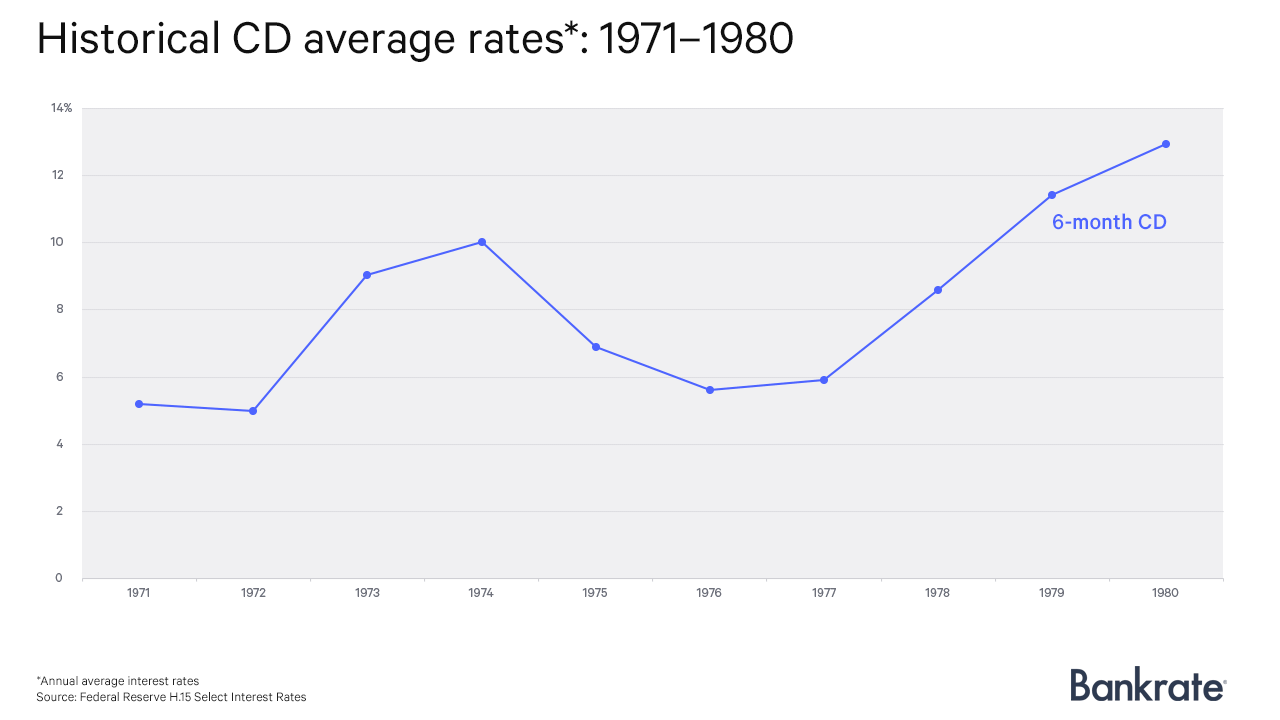 “I think the big thing was paying for a big, expensive war that we were waging in the 1960s and early 1970s led to rapid inflation,” Swidler says.

“It was a combination of accelerating inflation in the early ’70s and then tight monetary policy in the late ’70s that pushed up CD rates relative to what we had in the ’60s,” says Gus Faucher, senior vice president and chief economist of the PNC Financial Services Group. 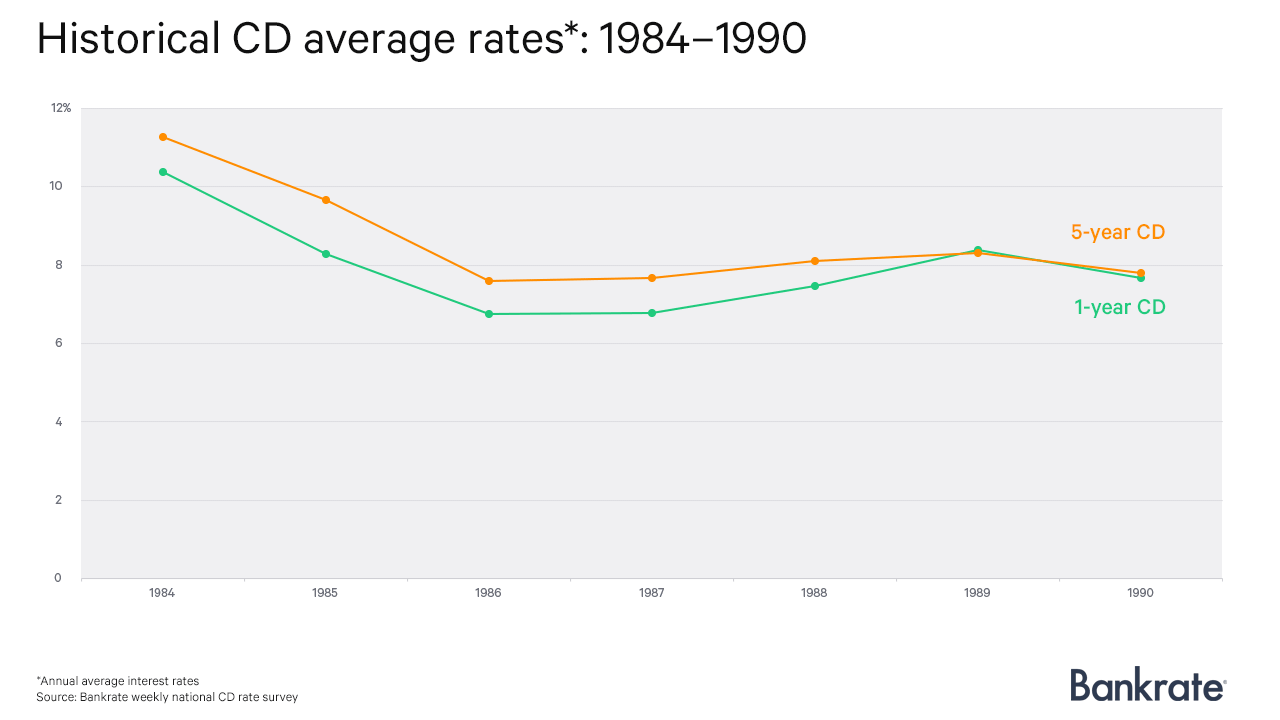 “The reason why the interest rates were so high in the ’80s is that we had that runway inflation,” says Jerry Lynch, a professor of economics in Purdue University’s Krannert School of Management.

While savers enjoyed higher rates on their certificates of deposit, their spending power took a hit. Find out how much interest you could earn on a CD these days.

“With inflation rates being so high, your purchase power might not actually have been that good because it was being eroded by inflation,” Beck says. 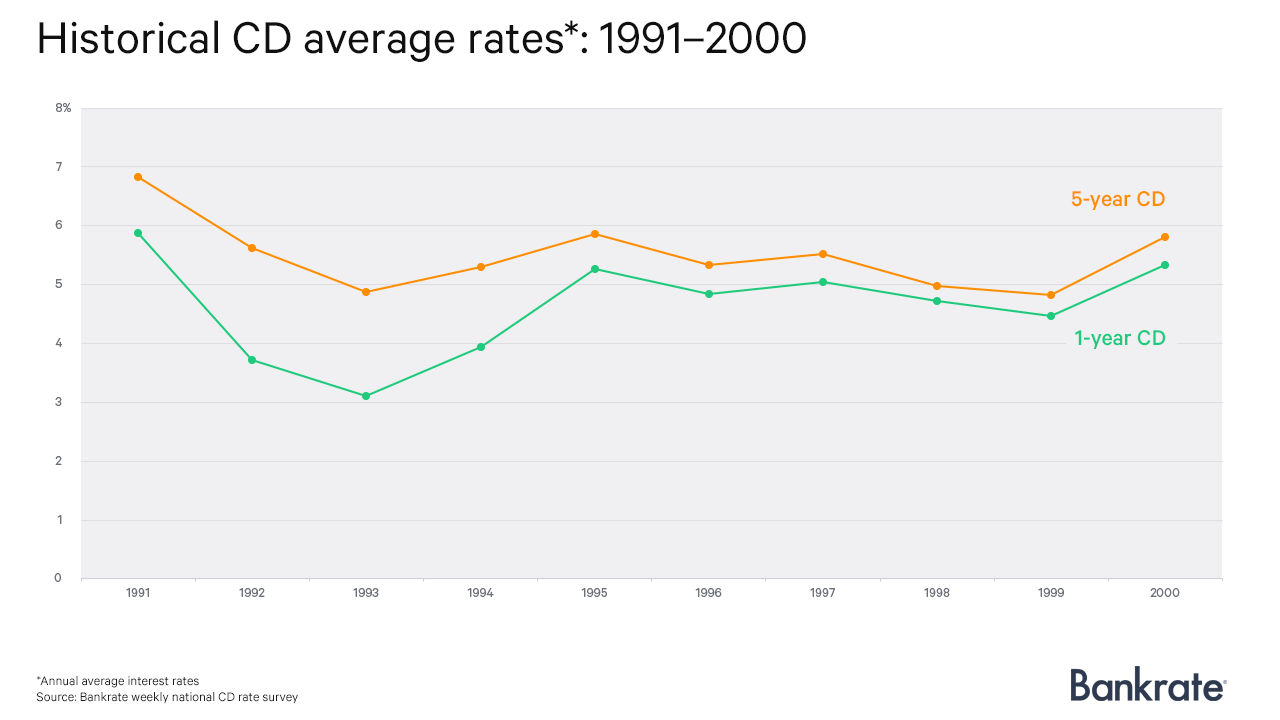 “The Fed didn’t need to run monetary policy as tight,” Faucher says. “It’s kind of the flip side of what we saw in the ’70s and ’80s, kind of a low inflation, low interest rate environment.”

CD rates started to look normal again. After sinking to 3.12 percent APY in 1993, the average rate on a 1-year CD rose to 4.47 percent APY in 1999. Find out how today’s rates on CDs and savings accounts stack up. 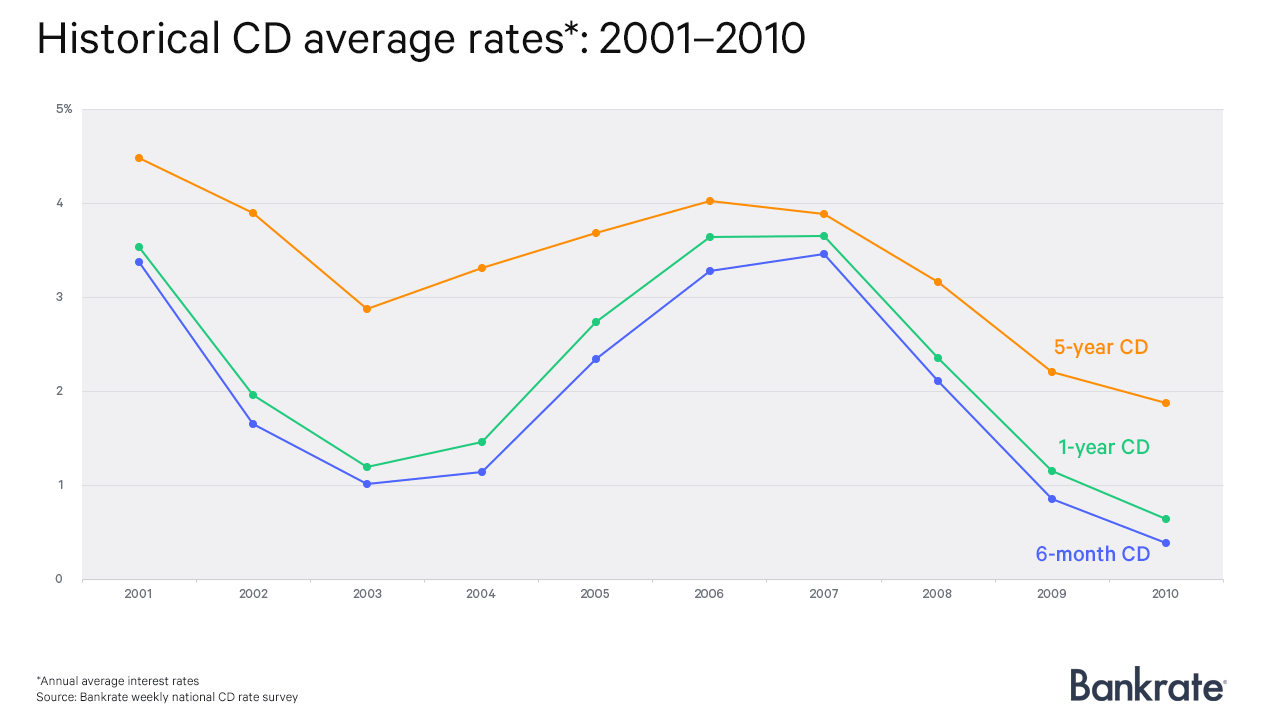 In early 2000, the economy started to slow. Hoping it would pick up speed, the Fed lowered interest rates. 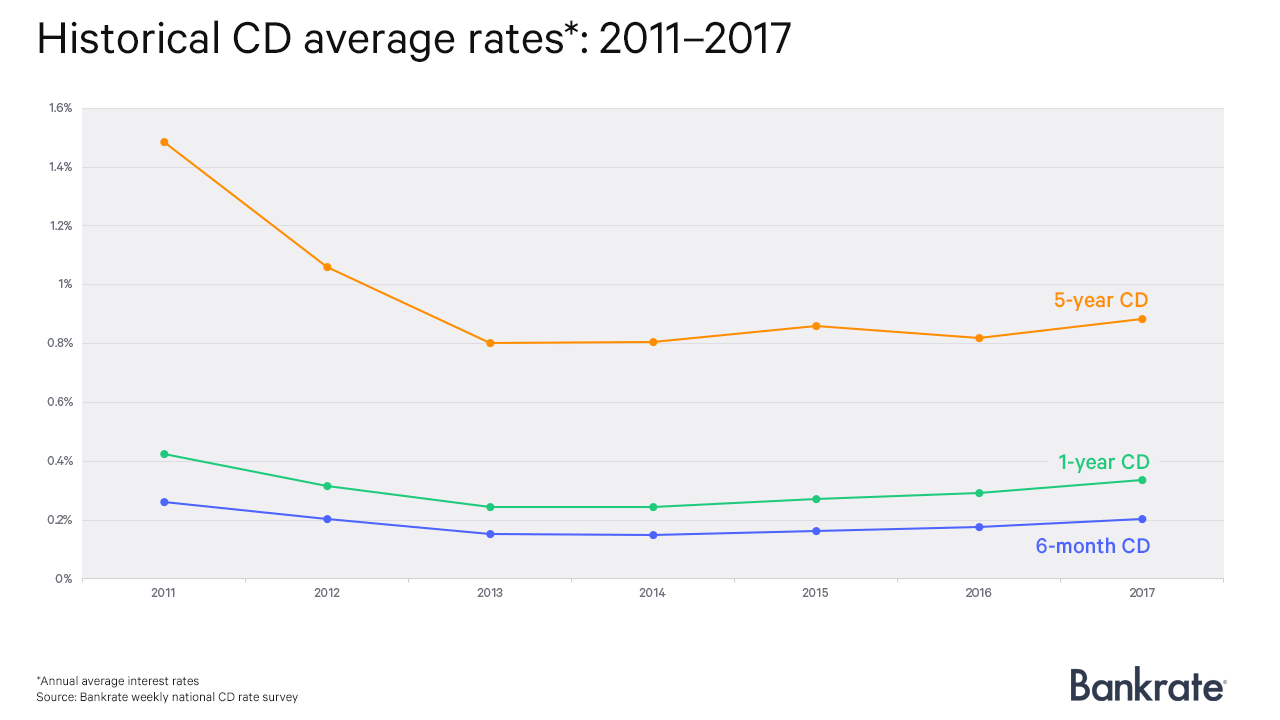 A decade after the Great Recession, they’ve barely budged. The average 1-year CD rate is now 0.4 percent APY, according to Bankrate’s most recent national survey of banks and thrifts.

Much of that, Faucher says, is due to the actions of the Fed and central banks worldwide.

“It’s a product of the global low interest rate environment, which is in turn a function of monetary policy both in the U.S. but also overseas.” 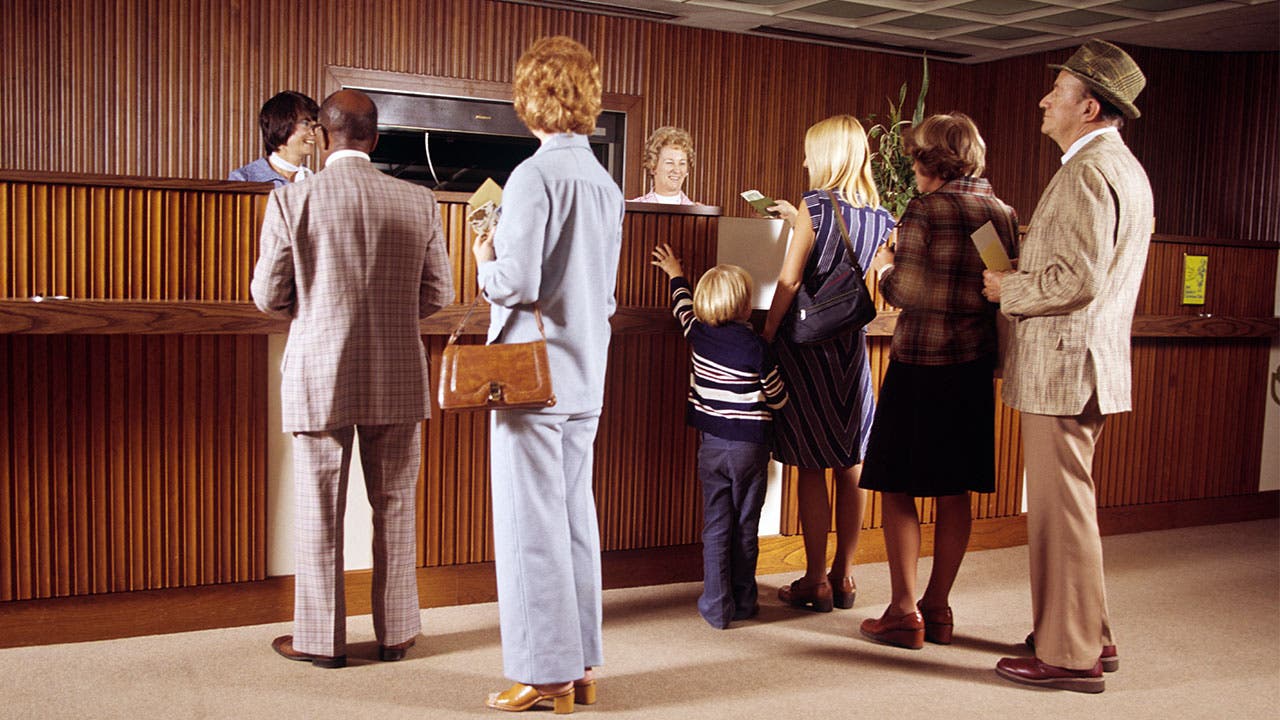 What the future holds

With the Fed gradually lifting interest rates, savers could eventually see CD yields rise. But it’s hard to predict how quickly or slowly banks and credit unions will act.

“I think CD rates are gonna be sticky for a while,” he says. “They’re not out there competing to get funds that they can turn around and lend out. They have all the funds that they want right now.”

As far as where CD rates are headed years from now, it’s hard to say.

“Tell me where inflation is and tell me what the Fed decides to do,” Beck says. “Those are the variables that will drive it. So to say it’s going to be at a certain point, I think, would be pure guesswork.”

One-year and 5-year CD rates are averages of Bankrate’s weekly national survey from 1984-2017. Because averages begin in 1984, the decade average for the 1980s is based on incomplete data.