The UK's most progressive cities of 2020

How progressive a city or town is can be really important to house hunters, as they look to make their move to a destination that may be better suited to their values and beliefs.

The mortgage experts at Bankrate UK assessed how progressive each UK city is, using key data points relating to social and environmental issues.

The ‘progressiveness’ of a city is defined not only by its recognition of the issues, but how the city addresses them and enables positive change.

Whether it’s a green-minded commitment to recycling, a strong voter turnout, or ensuring gender diversity in local government, these cities have not just realised their duty to encourage a socially-aware community, but they are enabling its continued progress.

Bankrate UK scored 50 cities in the following 7 categories in order to determine which is truly the UK’s Most Progressive City:

In 2019, Bankrate UK analysed 7 individual criteria in order to assess how progressive the UK’s cities are with regards to social and environmental issues. In 2020, we have revisited the criteria* to see which cities have continued to make headway on these issues and who has, unfortunately, taken a step back.

Use the below table to see how your city performed in this year's Progressive Cities Index. Click on each of the individual headings to see who ranked top and bottom for each criteria, or switch the view to see how the 2020 scores compare to 2019.

After finishing in third place last year, Bath has topped the rankings for 2020 as the UK’s Most Progressive City. Despite not ranking in first place for any of the 7 categories, Bath managed to hold off stiff competition from Bristol and Leicester.

While many may have expected Brighton & Hove to climb up to first place after missing out on the top spot by just 0.33 points last year, the famously ‘green’ city has in fact dropped 8 places to finish 10th this year. Despite maintaining its status as one of the most vegan and vegetarian-friendly locations in the UK, a decline in progressive search trends and voter turnout has resulted in Brighton slipping away from the top spot.

This year’s largest climber is Manchester, which has risen from position 30 to 13. The North-West’s largest city has made significant progress when it comes to reducing the Gender Pay Gap and increasing the number of Ultra-Low Emission Vehicles (ULEVs) on the road, helping it move into the top 15 most progressive cities in the UK.

Belfast saw the biggest decline in rankings over the past year, falling from position 21 to 43. Despite making progress in 2 of the criteria this year, the significant decline in recycling and Google searches around social and environmental issues has meant that Northern Ireland’s capital is now amongst the least progressive cities in the UK.

Want to live in one of these areas?

Find out how to buy your first house

The UK's 10 most progressive cities 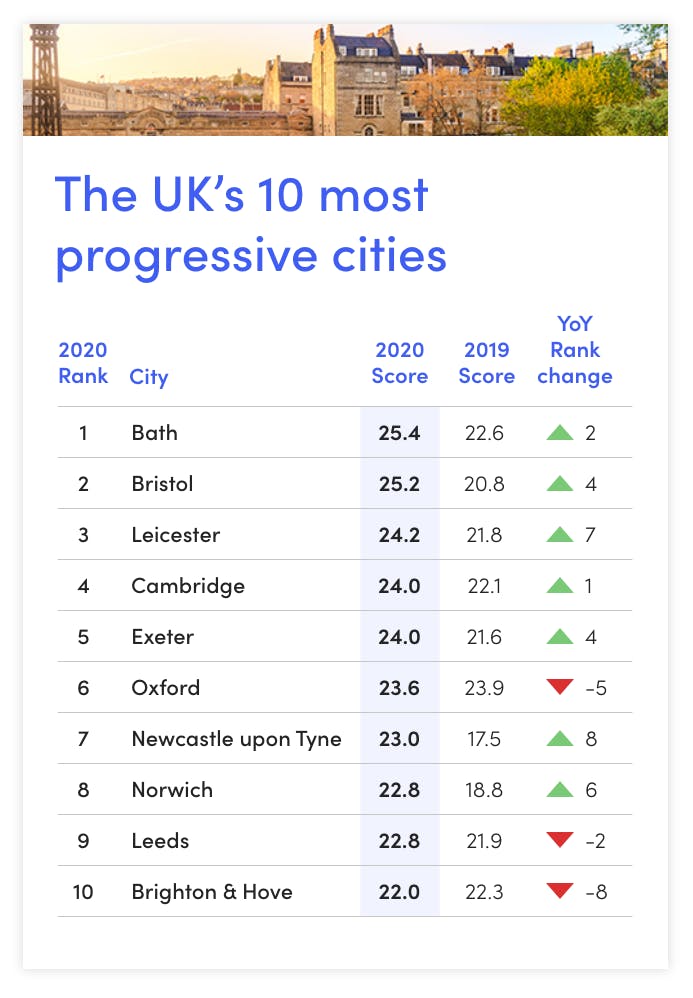 The 2020 Progressive Cities runner up, Bristol, has climbed from position 6 to 2 in the past 12 months. The cultural hub has made improvements across all categories, with the most notable being with regards to the number of ULEVs on the road and searches related to environmental and social issues.

Leicester comes in third place on the 2020 Progressive Cities Index this year after beating Cambridge by 0.2 points.

Newcastle upon Tyne and Norwich have all made significant progress in the past year. Both of these cities previously sat outside of the top 10, however thanks to score improvements in several categories, these cities can now proudly label themselves as some of the most progressive in the country.

At the other end of the index are the cities which are considered the least progressive in the UK. 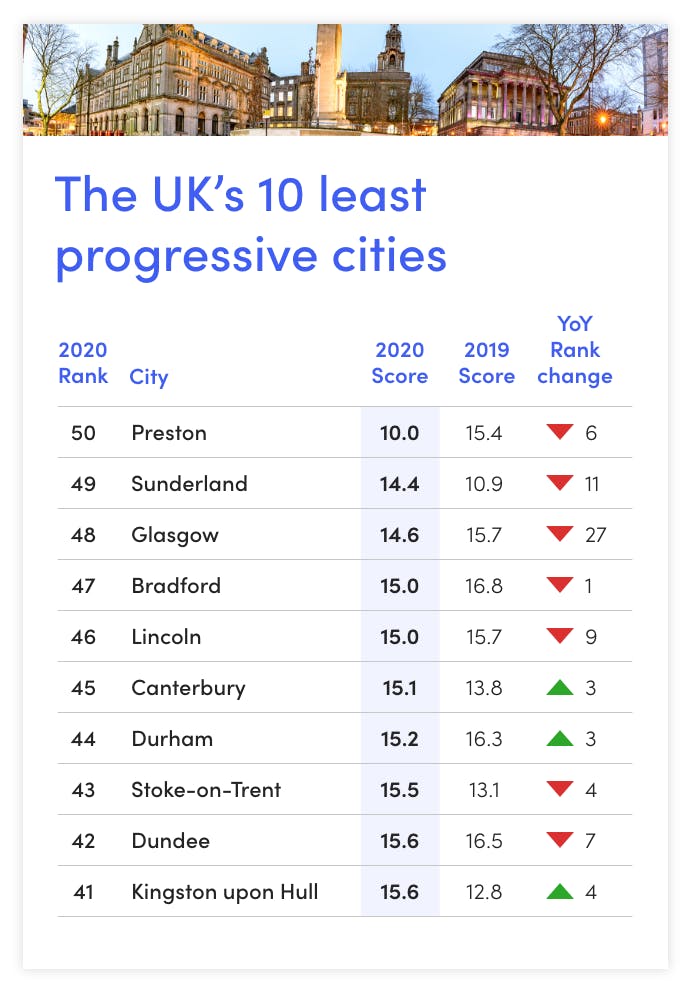 Ranking bottom of the 2020 Progressive Cities Index list is Preston. Despite improving the number of ULEVs on the road, the widening gender pay gap and the reduction of women in the local council has meant Preston is now the least progressive city in the UK.

Next on the list of least progressive cities in the UK is Sunderland. Despite being the second least progressive city in the UK, Sunderland previously placed in position 50, meaning it’s made improvements over the past 12 months. Thanks to a reduced gender pay gap and more interest in social-environmental issues online, the North-Eastern city is making progress in the right direction

When it comes to ensuring equal pay between men and women, Wakefield is leading the way. Comparatively, Durham and St Albans have the largest Gender Pay Gap in the country, scoring just 1.2 points out of 5 for this criterion.

The best Recycling Rate score belongs to Swansea, which placed 25th overall. Despite declining in the majority of criteria over the past year, the Welsh city has made significant improvements in increasing the amount of household waste which is recycled.

At the other end of the index is Birmingham, which is the UK’s worst city for recycling. Despite ranking bottom, Birmingham has made improvements to its recycling rate over the past 12 months and has scored 0.02 points more than it did in 2019.

Investing in the future, Peterborough came out on top for ULEV registrations for the second year in a row. Despite this, the Cambridgeshire city dropped 16 places this year to place 29th on 2020 Progressive Cities Index.

Oxford took the top spot for searches relating to social and environmental this year. However, despite the increased interest, Oxford dropped by 5 places to finish in position 6 this year.

The UK’s capital, London has dropped 16 places in the past year. In 2019, London was amongst the UK’s top 5 progressive cities, however as a result of a lower voter turnout, less women in local government and a fall in recycling, it now ranks in position 20.

The top ten is well-populated by cities with a strong student presence, with Bristol, Cambridge, Exeter, Oxford and Leeds all being home to major universities.

There are a few major cities which are notably absent from the top ten, like Edinburgh (14th), Birmingham (32nd), Manchester (13th) and Glasgow (48th).

Has this data sparked your interest of what to consider when purchasing your first home? Check out this handy guide from Bankrate about how to buy a house.

Or if you're already a property owner and looking to move home, you may want to compare remortgaging deals to find out how much you could borrow.

* In the 2019 Progressive Cities Index, we analysed BAME and Female representation in local governments. However, the report used for BAME Local Political Representation by Operation Black Vote has not been updated since the last election and therefore could not be used in our 2020 index. For this reason, this year's council diversity score and the year-on-year comparison only uses female representation data.

The most progressive city

So, we're looking for a community which is politically active and mobile; which champions equality in the workplace and beyond; which handles its waste the right way; which makes it easy to avoid animal products; which controls its carbon footprint; and which ensures women are well-represented in its local council. With a score for each category, we were able to determine the final scores to discover which UK city is truly the most progressive.

For our index, we broke down the scoring into seven core categories. A score out of five was awarded for each category and these results were used to determine the total score for each region.

This data set includes data for Bath & North East Somerset, County Durham, Cheshire West & Chester and County of Herefordshire. For purposes of this category we have used the most recent city based population estimates.

Population divided by number of Vegan/Vegetarian specific restaurants as listed on HappyCow.net on 25/08/2020.

Ultra Low Emission Vehicles (ULEV) data was sourced from the UK government and registered at the end of Q1 of 2020 divided by population.

Gender Pay Gap (GPG) is calculated by using the GPG median as provided by ONS.

Recycling scored were calculated by taking the percentage of recycled household waste collected in each city.

Search trends data was sourced from Google Trends. We entered key progressive terms (i.e. "Feminism", "LGBTQ+", "Fair trade") and the tool shows us how highly they popular in a given city. Each city is given an index of 1-100, which was factored into our overall score.

For cities not included in Fawcett report data has been inferred from local council websites.