Iconic Streets: What premiums do residents pay to live on some of the UK’s most iconic streets?

Do you ever look at an album cover or a programme on TV and wonder how much it would cost to live there? Luckily for you, the mortgage experts at Bankrate UK have investigated how much it costs to live on the likes of Abbey Road, Penny Lane and Electric Avenue, and compared these with the average property price to reveal the UK’s Iconic Street Premium. 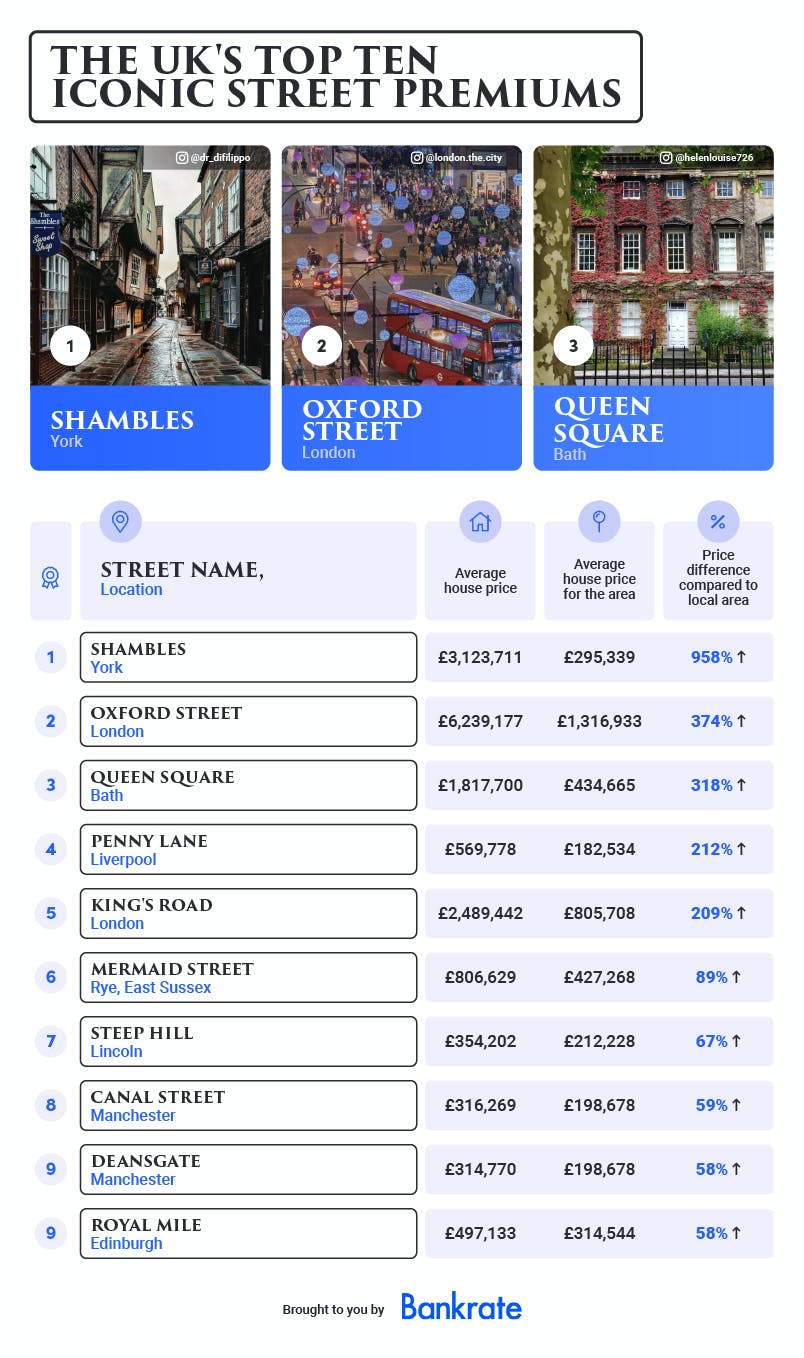 The iconic street with the biggest premium is that of the Shambles in York. This street in the centre of the city is one of the best-preserved medieval streets in the world and was even mentioned in the Domesday Book in 1086!

Coming in second is the famous Oxford Street in London. This 1.2 metre long street is one of the busiest shopping destinations in Europe.

Taking third place is Queen Square in Bath, which is a square of Georgian houses in the city, which includes the Circus and the Royal Crescent. All of the buildings in the square are Grade I listed.

23 Heddon Street is the famous location of the album cover for The Rise and Fall of Ziggy Stardust and the Spiders From Mars. This location has been dubbed “where Ziggy fell to Earth” as Ziggy Stardust was David Bowie’s alter ego. 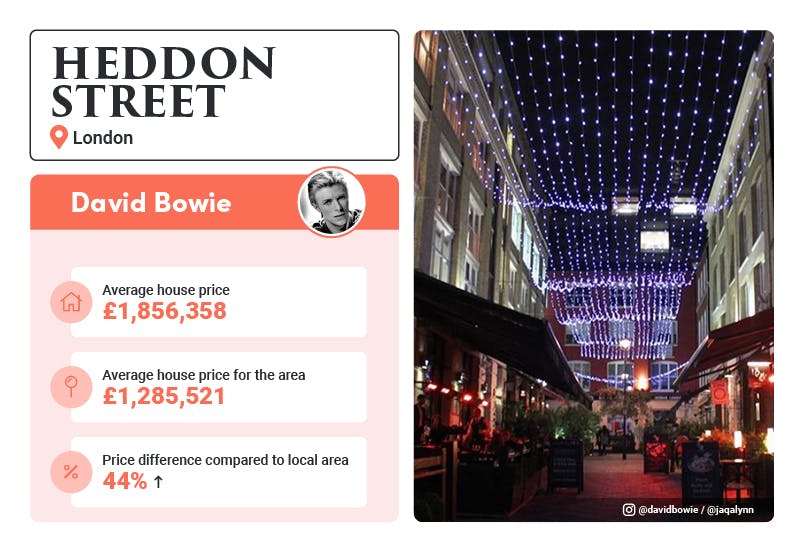 Heddon Street is located in the notoriously expensive Mayfair where the average property has a value of £1,285,521. However, properties on Heddon Street on average cost a whopping 44% more at £1,856,358.

The iconic Oasis album cover for (What’s the Story?) Morning Glory was taken on Berwick Street in London. 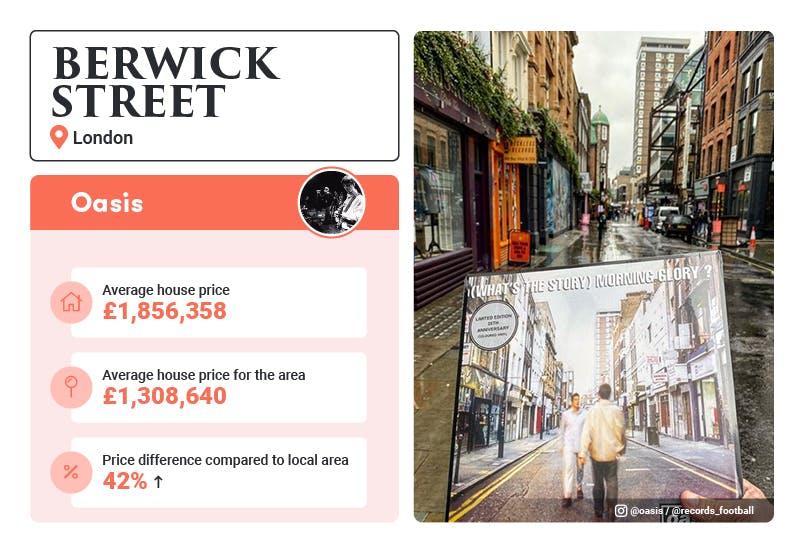 Back in the 1990s when this iconic photo was taken, Berwick Street was popular for its many record shops and this was why this location was chosen.

Abbey Road has become one of the most famous zebra crossings in the world, all thanks to the iconic Beatles album of the same name, where the famous recording studios are located. The 1969 album cover is one of the most recreated in the world even today. 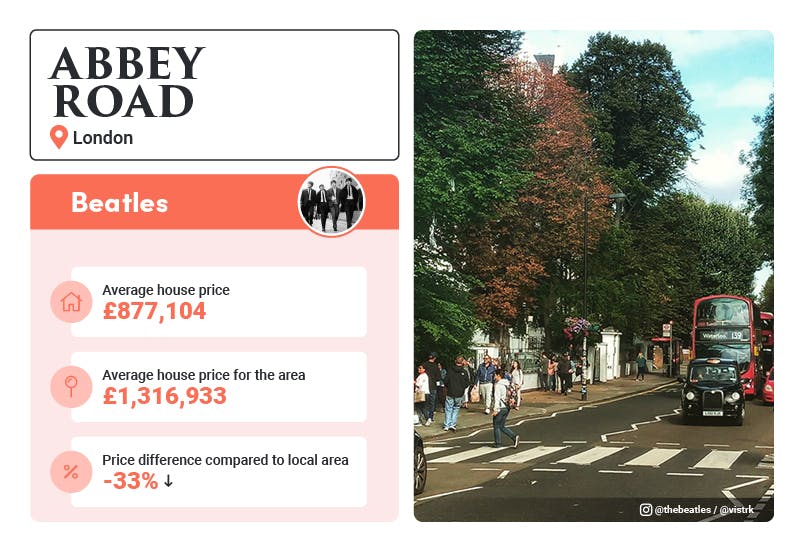 Abbey Road is located in Camden, where properties cost an average of £1,316,933. However, music and Beatles’ fans will be pleased to hear properties on Abbey Road are 33% cheaper with an average price of £877,104.

Penny Lane in Liverpool is also the name of the famous Beatles song, released in 1967 as a tribute to their hometown. 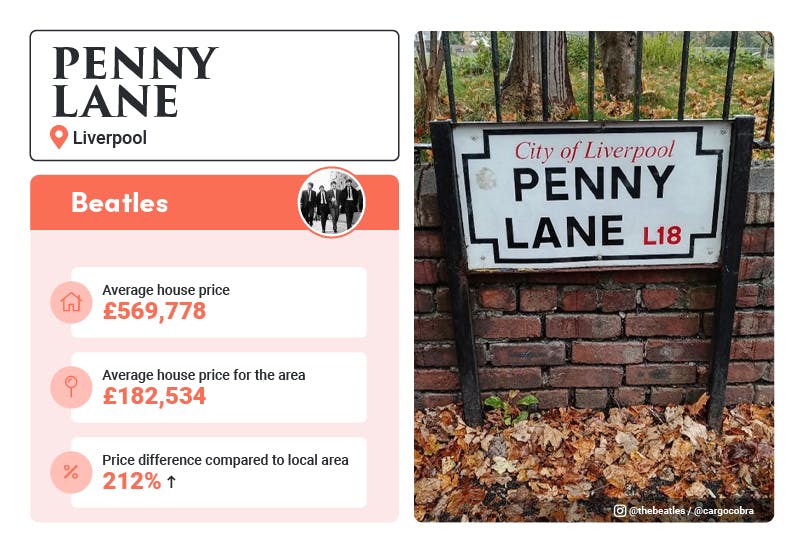 House prices on average in Liverpool stand at £182,534, however, prices on Penny Lane are £569,778, making the memorable Penny Lane a huge 212% more expensive than the rest of Liverpool.

‘Oh no, we're gonna rock down to Electric Avenue’ one of the most iconic songs, is based on the road of the same name in Brixton, which takes its name from the fact that it was the first market street to be lit with electric lights after being built in the 1800s. 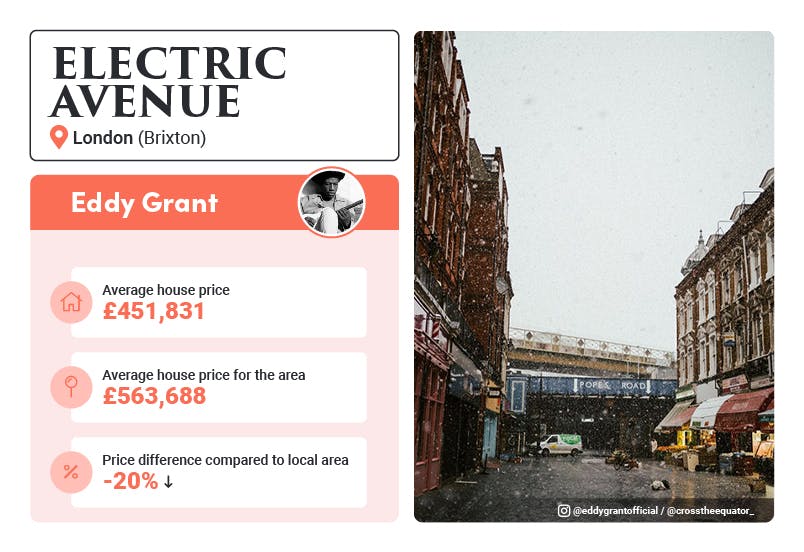 With the average house price at £451,831, it is actually 20% cheaper to live on Electric Avenue in comparison to the rest of Brixton - where the average property price is £563,688.

“You ain’t my mother!” and many other iconic lines have been uttered in Eastenders’ Albert Square, which is actually based on the real-life Fassett Square in Hackney, London. 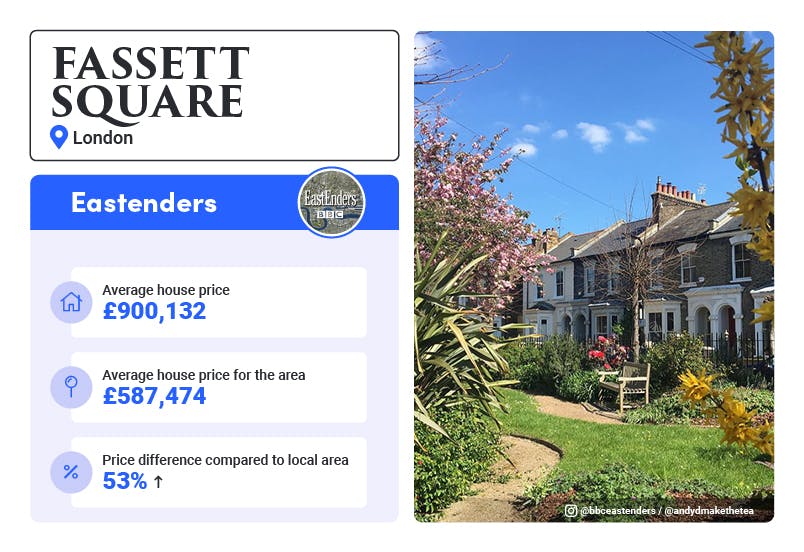 This house may seem very familiar - it is better known as the iconic number 4 Privet Drive - Harry Potter’s aunt and uncle’s home from the world-famous films. In reality, the property is actually located in Martins Heron, Bracknell.

Which are the most expensive of the iconic streets that we looked at? The answer, by some distance, was Oxford Street, London, with an average property price of over £6.2 million. In fact, only one of the top ten most expensive streets was located outside of the capital; the Shambles in York, at £3.1 million.