The growing popularity of healthy life choices is reflected on Britain’s ever-evolving high streets, with an increase in vegan restaurants, gyms, and health shops available to consumers. But what impact does a healthy high street have on neighbourhood appeal and house prices?

Interested in finding out where the healthiest citizens in the UK reside, and whether this growing popularity in a healthy lifestyle could be affecting house values, the mortgage experts at Bankrate.com/uk have devised a new index, HealthRate, to find out more.

The HealthRate index takes into account a variety of factors that once combined generates a score. The higher the score, the healthier the city’s high streets are.

How do we come up with the scores?

The HealthRate index is a points system that awards a city a certain number of points per ‘healthy’ amenity available within the area surrounding their high street. We deduct points for each ‘unhealthy’ facility available in the same area. The points range from between -3 and 3.

The number of points awarded takes into account the healthy life choices, social interaction and mental wellbeing the facility promotes. We awarded more points to gym facilities than to pubs, for example.

The city’s final HealthRate score is an accumulation of the points awarded per facility.

The UK’s healthiest high streets to live near revealed:

So, where should you move to if you’re a health-conscious homebuyer? Below are the top 15 cities that scored the highest thanks to their healthy high streets: 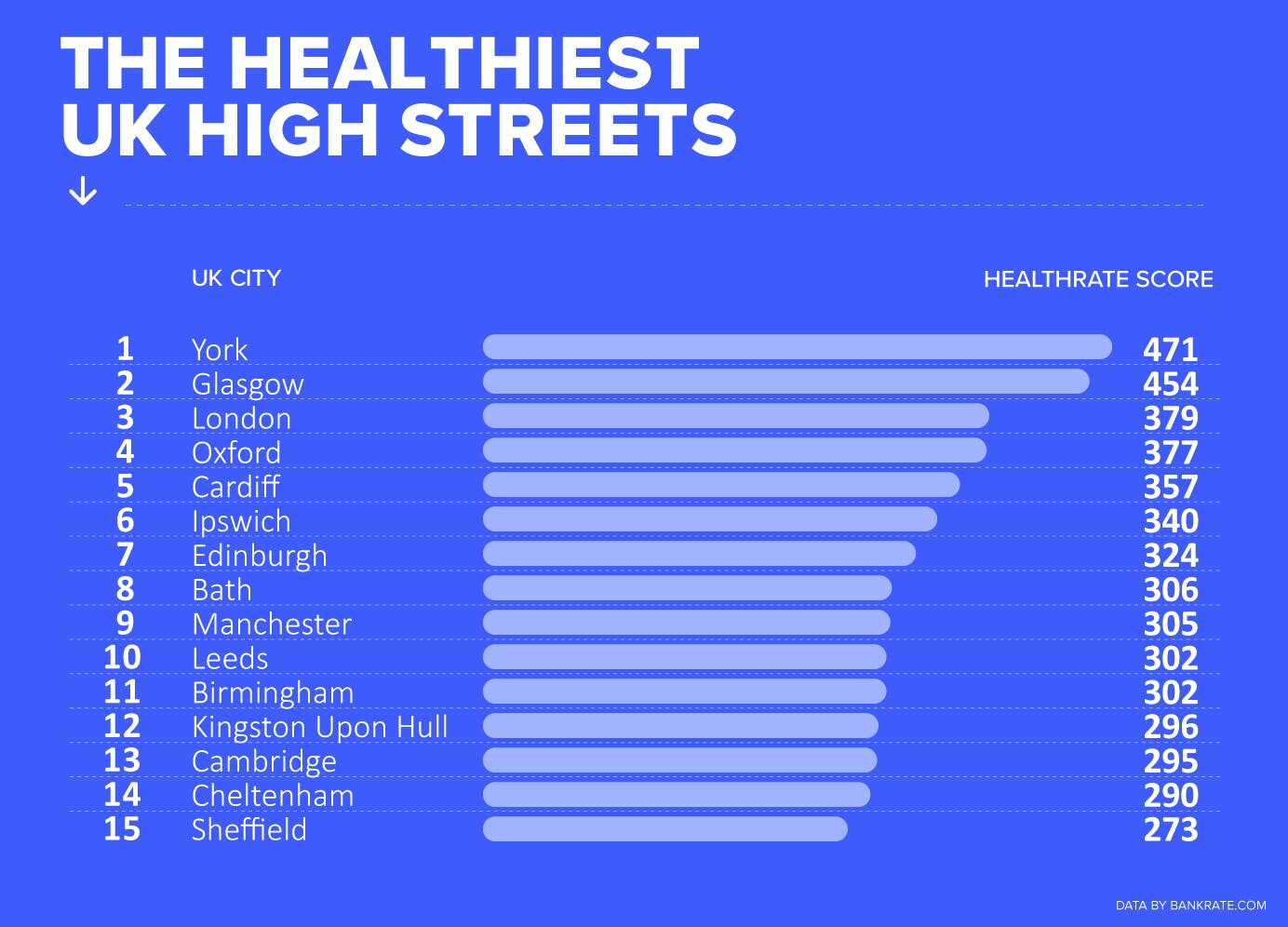 At the very top of our HealthRate index are York, Glasgow, and London.

York has been crowned the UK’s healthiest place to live largely thanks to the 162 vegan-friendly restaurants on offer. Not only that, but the historic city also offers an above-average number of leisure centres to its citizens. What’s more, York avoided many deducted points as its high street has very few vape shops, pawn brokers and gambling/betting shops.

Missing out on second place by just 17 points is Glasgow.

Glasgow has the most gyms surrounding the high street of any other city analysed in this report. There are twice as many wellbeing centres, such as mental health support accessible to Glaswegians compared to the average UK high street, which helped boost Glasgow’s HealthRate score.

Rounding off the top three healthiest places to live is London.

Missing out on the top two spots can largely be attributed to the sheer amount of fast food takeaways that London has to offer. However, London offers the highest number of wellbeing centres and GP surgeries.

The unhealthiest places to live in the UK, revealed: 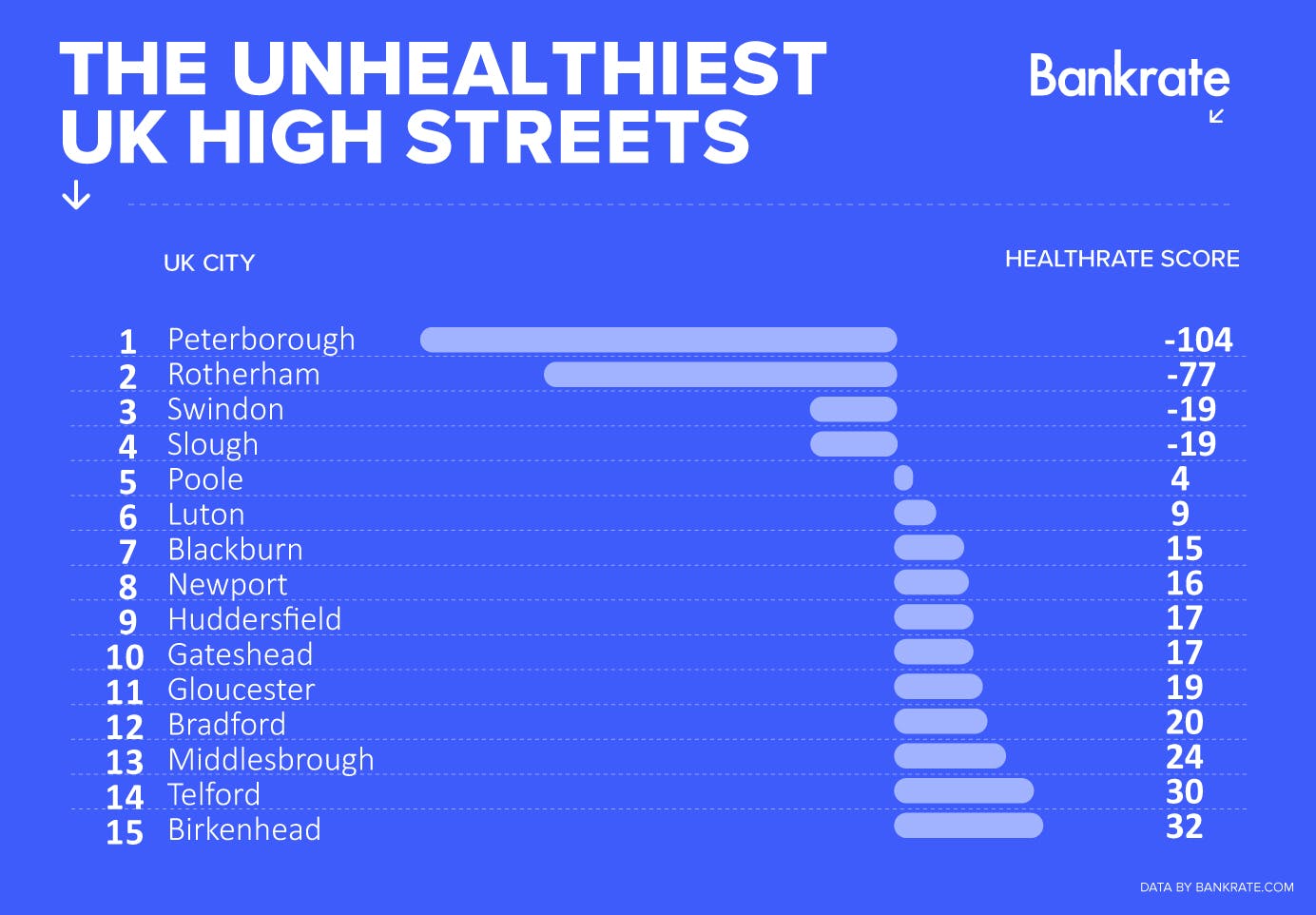 The Bankrate HealthRate index has revealed the cities scoring the lowest for their healthy high street offerings. At the bottom of our list are Peterborough, Rotherham, Swindon and Slough.

Peterborough is the least healthy place to live in the UK. Its below average access to gyms near the high street (2) and lack of green space can be attributed to this low scoring. Further deductions from their HealthRate score were made due to the high number of takeaways on offer (75+), and the fact that Peterborough has double the amount of pawn brokers than the average UK high street.

Rotherham is the second lowest scoring city on our index.

A below average access to leisure centres and libraries also attributed to Rotherham’s low ranking. The city is also home to a higher than average number of vape shops and pawn brokers too.

In joint third place are Swindon and Slough.

Slough’s high street was deducted 142 points for the 71 fast food takeaways available, and only gained three points for the one leisure centre in the area.

What is your city’s HealthRate score? 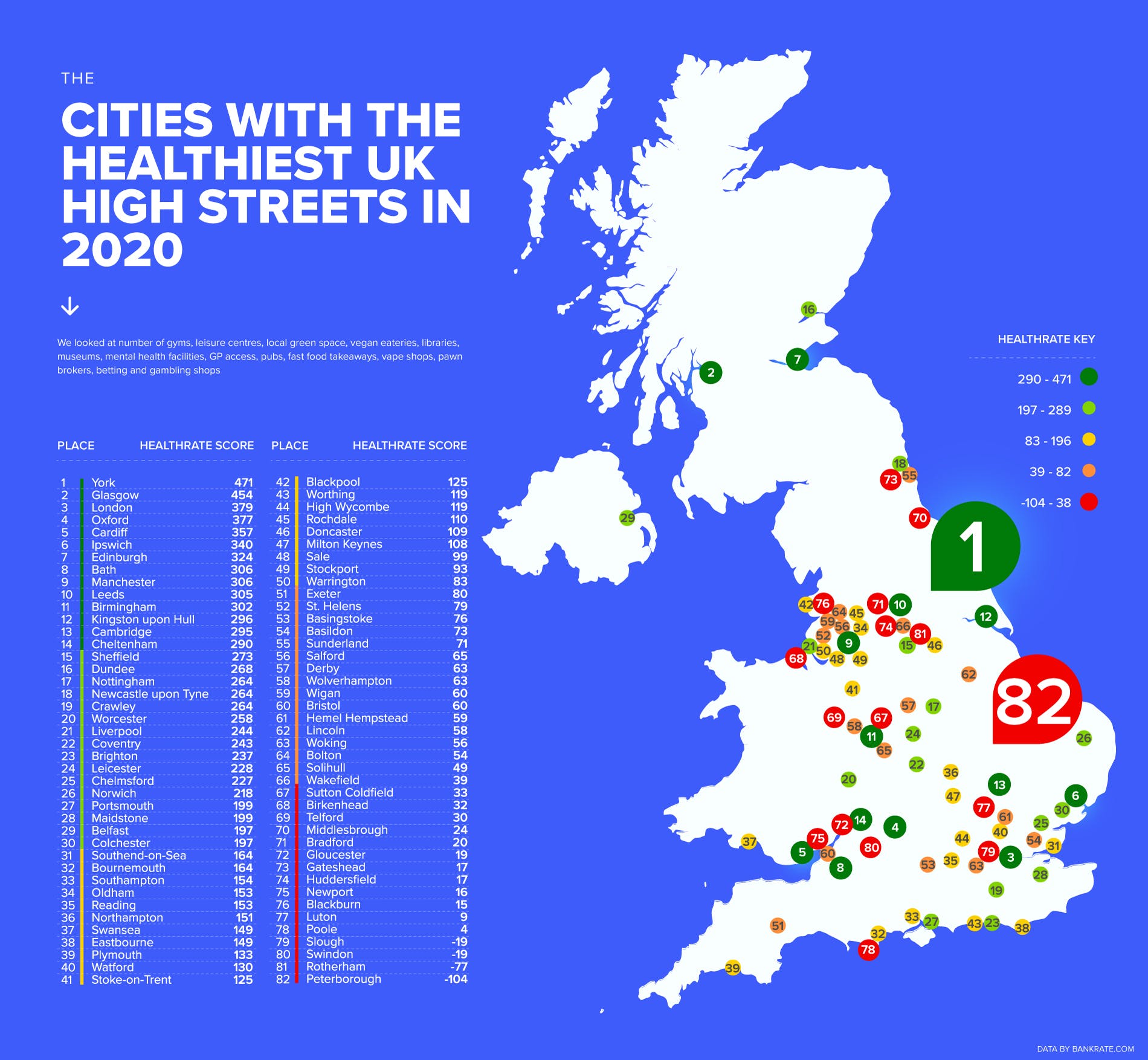 Our HealthRate index also found out in which city you are most likely to find each amenity – whether healthy or unhealthy. The breakdown is as follows:

Glasgow takes the crown for the most gyms in the UK - with 79 fitness facilities within walking distance from the high street.

Our study defined green spaces as land that is undeveloped and open to the public. With 64 in total, the surroundings of Cambridge’s high street are home to the highest number of green space areas.

Most restaurants suitable for vegans: Leeds

With 181 restaurants with vegan options near the major high street, Leeds holds the title for most restaurants suitable for vegans.

Our study defined leisure centres as public buildings with different sports and exercise facilities available. Derby came out top with a whopping 32 leisure centres close to the high street.

Along with being the most woke city, Oxford also has the largest number of libraries in proximity to the high street, with 19 in total.

York is home to the most museums near the high street having 52 within walking distance.

With 42 different facilities within close proximity to the high street, London ranks top for GP access.

University town Norwich has the most pubs on and near its high street – 244 to be exact!

London is home to the most takeaways in the UK, with 185 near the high street.

Most gambling and betting shops: Glasgow

This study took into account any licensed bookmakers, adult gaming centres and betting shops. At a grand total of 31, Glasgow has the most gambling and betting shops surrounding its high street.

Again, London reaches the top spot for an unhealthy amenity, with 37 pawn brokers accessible to Londoners from the high street.

With 16 in total, Glasgow’s high street is home to the most vape shops in the UK.

Is there a correlation between healthy cities and higher house value?

After finding out each city’s HealthRate score, we looked at average house prices per city (using Zoopla data) – to compare the averages for our healthiest high streets compared to their not-so-healthy counterparts. 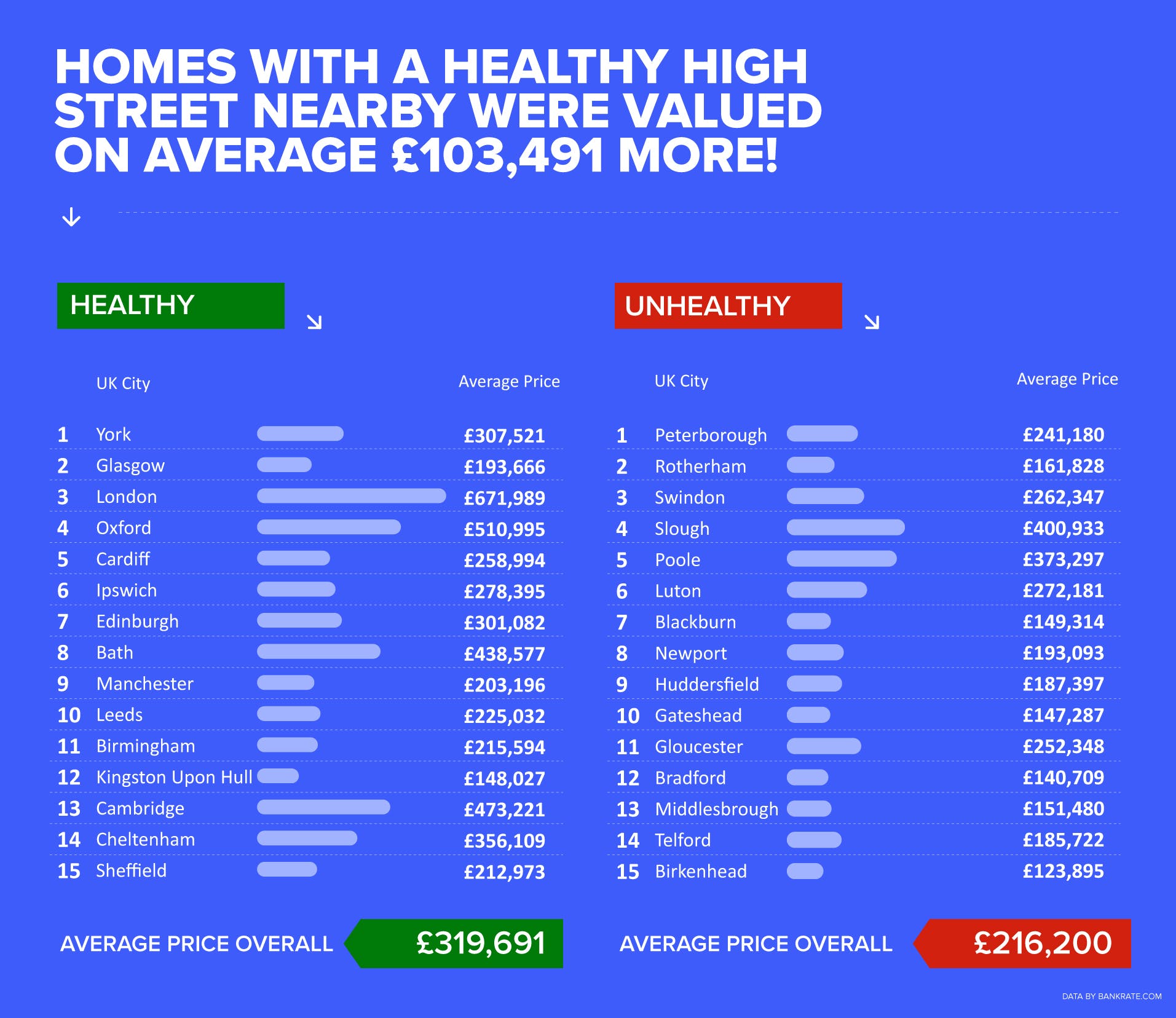 - Every city included in the research is home to over 100,000 residents. The most popular/main high street from each city was used as a representative.

- The number of facilities on each high street that determines them as healthy or unhealthy was found by using Google Maps. To get an overview of the full high-street, the facilities were analysed within 10 roads of the selected high street.

- Bankrate has used their own HealthRate™ index that ranges between -3 and 3. The scoring per facility is calculated by taking into account the healthy life choices, social interaction and mental wellbeing it promotes. The points system is as follows: