Who is earning the most from building homes in video games?

From The Sims to Minecraft, Animal Crossing to Terraria, games where you can build your own home are seeing a surge in popularity.

For some, it could be the act of building their creative vision in a never-ending space without needing to invest large amounts of real-life money in the projects, while for others these games could be a great way of practising their skills and showing off some amazing creations. But who are the at-home architects making a killing from these gaming builds?

While architects in the real world can earn, on average, £61,202 in the UK, does being an architect in the digital world stack up to this?

We’ve taken a look at 100 of the most popular YouTubers who specialise in house building content for Minecraft, Animal Crossing: New Horizons, Terraria and The Sims 4 to find out!

In comparison to ‘real life’ architects, our rich list list shows LDShadowLady could be earning as much as £4 million on YouTube from creating elaborate and artistically pleasing homes and towns in Minecraft. Staggeringly, that’s 6,346% more than a real-life UK architect's annual salary, making her the richest gaming architect on our list.

In second place is Mumbo Jumbo. Arguably one of the most well known Minecraft players from the Hermitcraft Minecraft server, Mumbo Jumbo has such an extensive knowledge of redstone mechanics that most other hermits (and players) have said that it is much too complicated for them to understand. Because of his knowledge of one of the more technically creative aspects of the game, Mumbo has amassed over 7 million subscribers which could have earned him an estimated £3,462,314 from YouTube.

Coming in third on our list is JeromeASF, an American YouTuber that primarily posts Minecraft Let's Plays, role plays, and minigames. Currently, Jerome records with a group called "The Buddies", creating prank videos and creative content for his 5,380,000 subscribers. Overall this means Jerome could be making an estimated £3,049,213 from this YouTube channel. 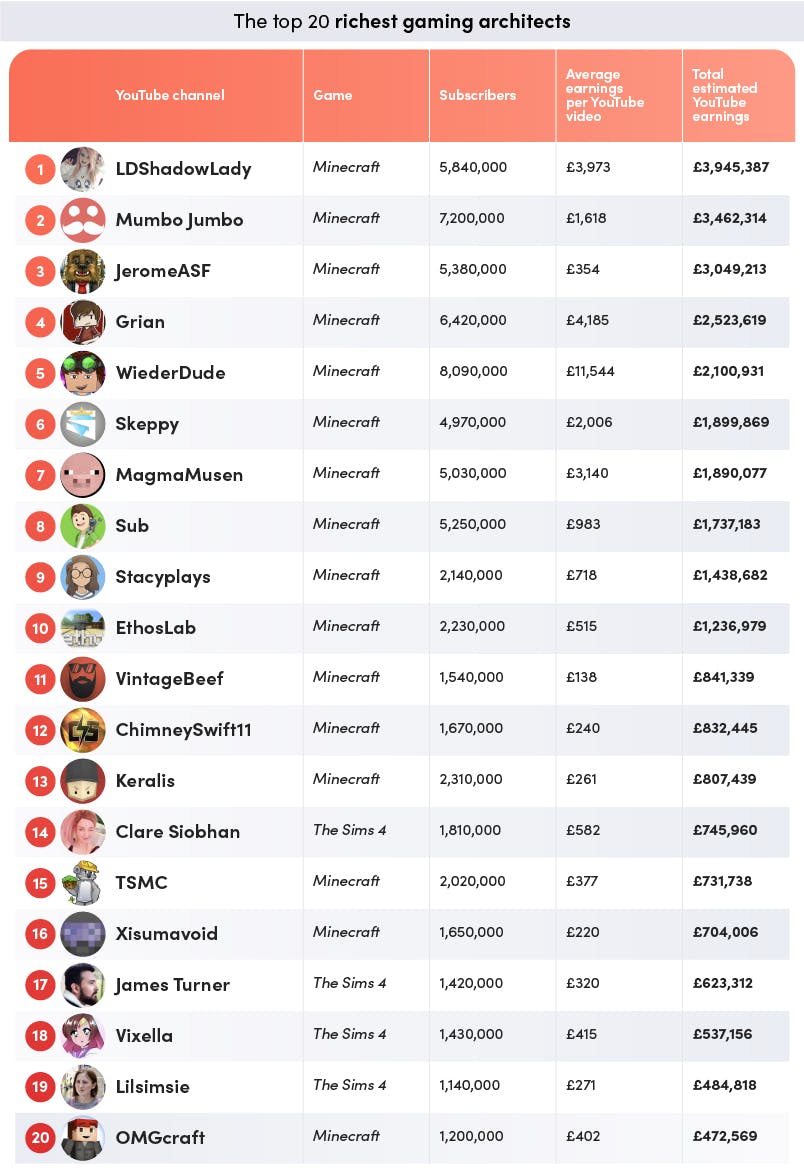 For architectural builders, Minecraft is the most profitable game you could play on YouTube, as seen by 75% of our top 20 gaming architects being Minecraft YouTubers. Despite the game being focused around a world that is made from pixel blocks, the amount of detail available is staggering. 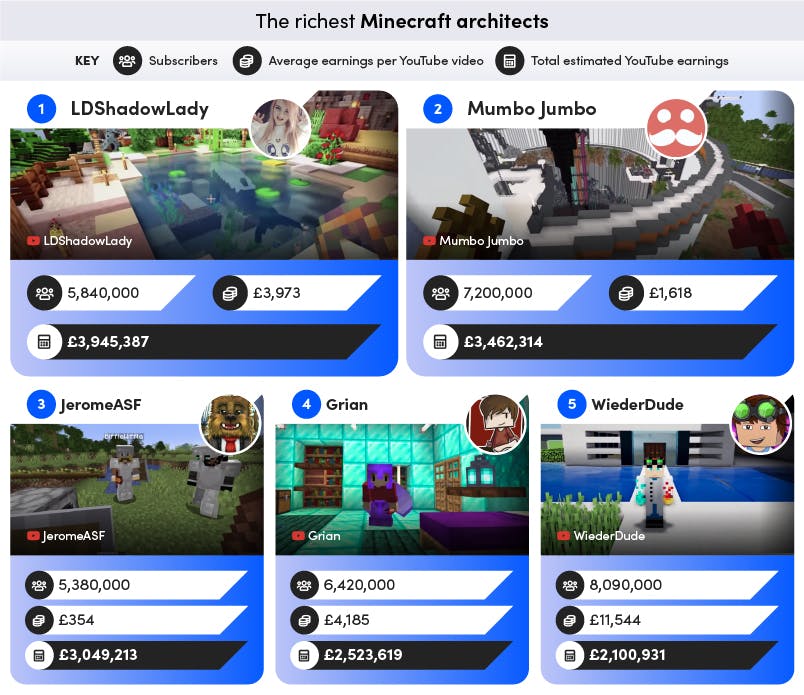 After taking the world by storm in 2020, Animal Crossing: New Horizons on the Nintendo Switch brings a whole new set of tools for renovation and redesign to the already extensive customisation options the Animal Crossing series has to offer. 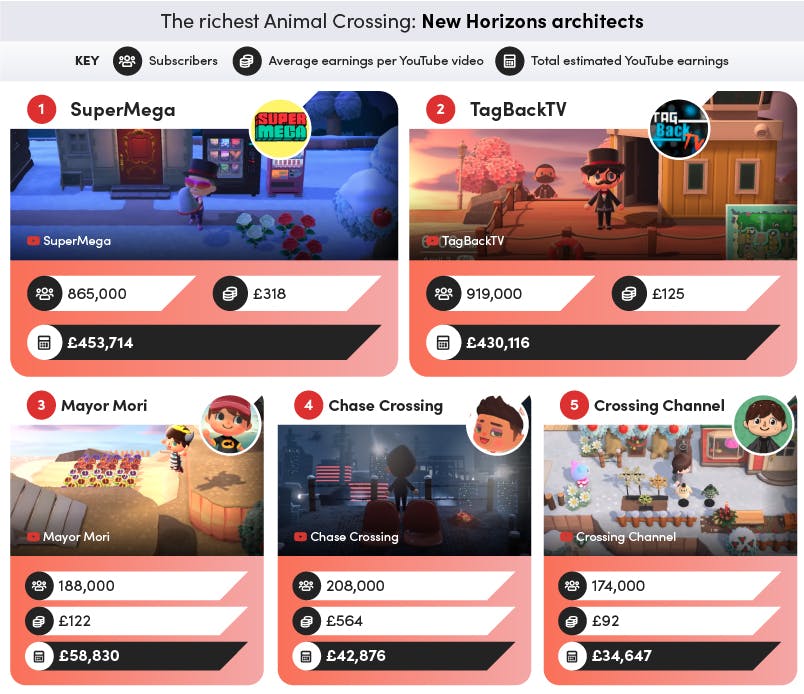 Released around the same time as Minecraft, Terraria is another action-adventure sandbox game that allows you to fight for survival, fortune, and glory. You can delve deep into cavernous expanses, seek out ever-greater foes to test your mettle in combat, or construct your own city - whatever your heart desires in the 2D pixel world. 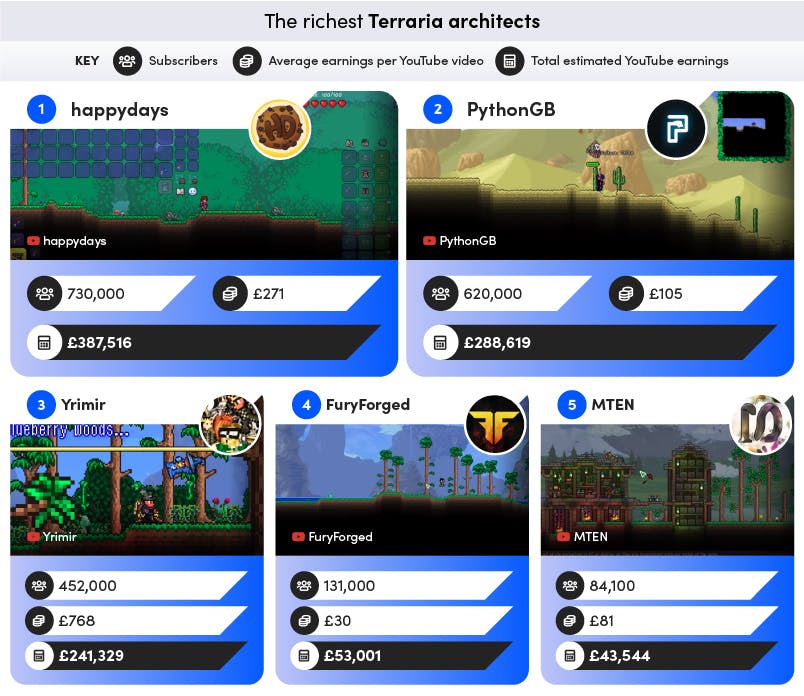 The richest The Sims 4 architects

Despite being seven years old now, The Sims 4 is still greatly loved by its community for the vast customisation options and the ability to live out fantasies you wouldn’t normally be able to in the real world. 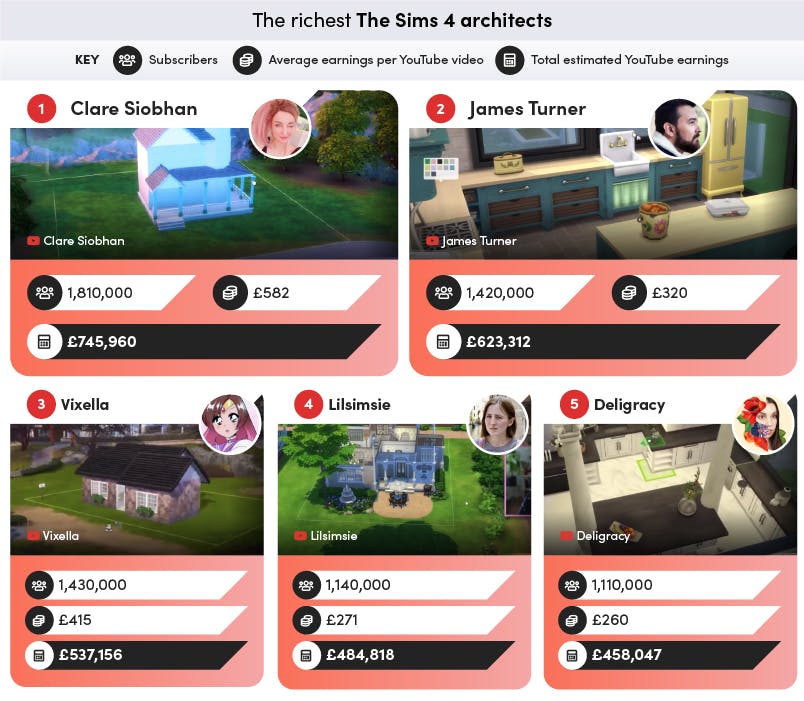 Check out the full list below to see if your favourite gaming architect makes the official 2021 rich list:

If any of these online architects has inspired you to move home, you may want to compare mortgage rates. For more information on remortgaging and moving home, you can check out our guides and advice hub.

We looked at five of the most well-known sandbox, base building, role-playing games (Minecraft, Animal Crossing: New Horizons, Terraria and The Sims 4). We then collected the names of YouTubers who only create videos of the games, specifically the base building element of the games.

Any YouTubers who did funny compilations, challenges or reacting videos (such as Dream, DanTDM, Stampylonghead and PrestonPlayz) were not included as they could not be considered architects due to them not building or renovating a house or house-like structure.

All subscriber data collected and potential earnings correct as of 10 March 2021.